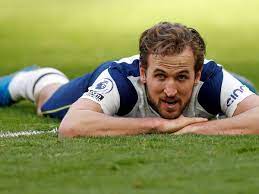 Harry Kane will become one of the Premier League’s top earners if he moves to Manchester City this summer. However, his move from the Tottenham Hotspurs might be stalled by the high sum of money his current team is demanding to release him.

Manchester City and Chelsea have been forced to cool down their interest or even look elsewhere for suitable options to keep their budgets within limits.

Last month, City reportedly had a £100 million ($140 million) proposal for England captain Kane rejected by Spurs, while it was then reported a £160 million ($222 million) move was being planned.

And while City maintain they will not pay that sort of money for one player, they are interested in signing him and Kane wants out.

Jack Grealish, meanwhile, has been the subject of interest from the Premier League champions, who are reportedly considering a £100 million ($140 million) bid.

However, Villa are believed to be preparing to offer a club-record £200,000 ($280,000)-a-week contract offer to keep him at Villa Park, with talkSPORT’s transfer guru Alex Crook revealing he may be having second thoughts over a transfer last based on fears he could become a bit-part player at the Etihad.

TIe Sun are reporting Pep Guardiola and his club are hoping to make progress in their moves for the Spurs striker and Aston Villa captain by the weekend. Trevor Sinclair, however, who made 98 appearances for Man City, is adamant his former club would be better off going for Chelsea’s £40 million ($56 million)-rated striker Tammy Abraham over the huge fee mooted for Kane.

Asked by Jamie O’Hara if Sinclair would take Abraham over Kane at City, the latter replied on Monday’s talkSPORT Breakfast:

“I would, yeah. He’s a young enough player and with Pep Guardiola’s coaching ability and the teammates around him… he’s a top player. The season he had at Aston Villa and then he went back to Chelsea and did very well. He’s a handful, his pace, he looks to stretch the lines, he’s a finisher.

Could Abraham be a better option than Kane? Sinclair certainly thinks so

“No player’s perfect, especially at 22 or 23, but there’s a lot of growth there with Tammy. He’d be someone I’d be very interested to see at Manchester City,” according to Sinclair.

On City’s reported £160m bid for Kane, Sinclair added: “It just goes against my principles of what I think about the club. Honestly, it really does.

“I just don’t want to see the club going out there and spending that ridiculous amount of money to bring one player in. That just kills it then. You might as well pack up.”

Any deal for the two players will likely see them become two of the best paid players in the Premier League. De Bruyne makes the most of any Premier League player right now