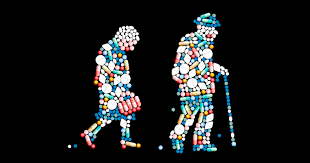 How overmedication may lead to 150,000 premature deaths, 4.6m inpatients and cost US taxpayer $62 billion

When the risk of the medications outweighs their potential benefits, patients are in danger of significant health consequences. Every day, 750 older adults are hospitalised due to serious side-effects from their medications, including falls, allergic reactions and internal bleeding.

With each additional medication prescribed, the risk of an adverse reaction increases by seven to 10 per cent.

Compared to patients taking fewer than five medications, prostate cancer patients taking five to nine, 10 to 14, and over 15 drugs had respectively 42 per cent, 75 per cent, and 114 per cent higher rates of hospitalisation after chemotherapy.

Patients with breast and lung cancer had similar patterns. The group taking more drugs did not appear to have been sicker than those taking fewer drugs, based on hospitalisation rates in the six months before the chemo treatment.

If trends continue, it’s estimated that polypharmacy will lead to nearly 150,000 premature deaths in the US over the next decade, according to the report by the Lown Institute. It will also be responsible for at least 4.6 million hospitalisations in the US between 2020 and 2030, costing around $62 billion, the report predicted.

Certain drugs are especially risky for older adults and warrant care in prescribing and monitoring, experts say. Here, from a report by the Lown Institute, is a cheat sheet of the classes of drugs that are most likely to cause problems.

Pushing for a health care system that promotes more judicious drug use and deprescription is extremely difficult, Reeve says. But patients seem open to trying: In 2018, a nationally representative survey by Reeve and her colleagues suggested that 92 per cent of older adults in the US are willing to stop taking one or more of their medications if their doctor says it’s possible.

But many doctors lack the educational resources to do so safely. There are some general and drug-specific deprescription guidelines, along with websites such as the electronic deprescribing tool MedSafer that guide doctors and pharmacists through the process, but few of these have been shown to work in clinical practice.

“Deprescribing itself is not a simple action,” says Reeve, who is working to create deprescription guidelines that could be used internationally. “It’s not something that can happen within a 10- or a 15-minute appointment.”

It involves identification of a potentially unnecessary or dangerous drug, an agreement between doctor and patient to deprescribe the drug, and often a slow tapering of the medication while the patient is closely monitored.

Scotland’s polypharmacy guidelines by drug and health-care experts, first published in 2012, were designed to fill this resource gap and aid clinicians throughout the prescription and deprescription process.

The effort’s “7-Steps” technique encourages doctors to carefully review a patient’s diagnoses and treatments, determine which drugs the individual needs, identify potential adverse drug reactions and ensure that the patient is involved in the decision-making process.

An evaluation of the guidelines reported that from 2012 to 2018, there was a notable reduction in the number of high-risk drug combinations prescribed to older adults, according to data collected by Scotland’s health care system.

This included a particularly dangerous combination: use of nonsteroidal anti-inflammatory drugs like aspirin; high-blood-pressure medications such as angiotensin II-receptor blockers that relax the veins and arteries; and diuretics, which help to rid the body of excess salt and water through urine.

Known as the “triple whammy,” this amalgamation can lead to kidney and heart failure – especially in older patients with a history of liver disease.

More broadly, use of these guidelines over the six-year period resulted in the deprescription of more than 120,000 inappropriate medications annually.

After a succession of deprescribing guidelines were published in Scotland in 2012, 2015 and 2018, prescription rates fell for a risky drug combination known as the “triple whammy”: nonsteroidal anti-inflammatories in combination with diuretics and ACE inhibitors/angiotensin II-receptor blockers.

Now it’s a matter of whether health care systems in other countries can implement similar guidelines. “It is entirely possible, but it will take time,” Tobias Dreischulte, a clinical pharmacist at Ludwig Maximilian University in Germany and one of the authors of the Annual Review paper, says.

He thinks that these changes will be easier to make in countries with centralised medical systems such as the UK, where the National Health Service, or NHS, is publicly funded and the government runs hospitals and employs doctors.

As a result, the NHS “is very effective in getting evidence-based medicine across to practicing clinicians,” he says.

Healthcare in the US, on the other hand, is highly splintered. As of 2019, 68.5 per cent of the US population was covered by private health insurance, almost 43 per cent had public coverage such as Medicare and Medicaid, and just over nine per cent were uninsured. (Some individuals have more than one type of coverage at a time.)

US records more firearm-related deaths than any other wealthy nation, 2020 was deadliest in 20 years