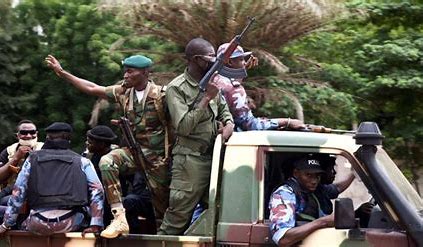 Africa became the region hardest hit by terrorism in the first half of 2021 as the Islamic State and al-Qaida extremist groups and their affiliates spread their influence, boasting gains in supporters and territory and inflicting the greatest casualties, UN experts said in a new report.

The panel of experts said in a report to the UN Security Council circulated on Friday that this is “especially true” in parts of West and East Africa, where affiliates of both groups can also boast of growing capabilities in fundraising and weapons, including the use of drones.

Several of the most successful affiliates of the Islamic State are in its Central and West Africa province, and several of al-Qaida’s are in Somalia and the Sahel region, they said.

The experts said it’s “concerning” that these terrorist affiliates are spreading their influence and activities including across borders from Mali into Burkina Faso, Ivory Coast, Niger and Senegal as well as incursions from Nigeria into Cameroon, Chad and Niger in West Africa. In the East, the affiliates’ activities have spread from Somalia into Kenya and from Mozambique into Tanzania, they said.

One of “the most troubling events” of early 2021 was the local Islamic State affiliate’s storming and brief holding of Mozambique’s strategic port of Mocimboa da Praia in Cabo Delgado province near the border with Tanzania “before withdrawing with spoils, positioning it for future raids in the area,” the panel said.

Overall, the experts said, Covid-19 continued to affect terrorist activity and both the Islamic State, also known as ISIL, and al-Qaida “continued to gloat over the harm done by the coronavirus disease pandemic to their enemies, but were unable to develop a more persuasive narrative.”

“While ISIL contemplated weaponising the virus, member states detected no concrete plans to implement the idea,” the panel said.

In Europe and other non-conflict zones, lockdowns and border closures brought on by COVID-19 slowed the movement and gathering of people “while increasing the risk of online radicalization,” it said.

The experts warned that attacks “may have been planned in various locations” during the pandemic “that will be executed when restrictions ease.”

The panel said that in Iraq and Syria, “the core conflict zone for ISIL,” the extremist group’s activities have evolved into “an entrenched insurgency, exploiting weaknesses in local security to find safe havens, and targeting forces engaged in counter-ISIL operations.”

Despite heavy counter-terrorism pressures from Iraqi forces, the experts said Islamic State attacks in Baghdad in January and April “underscored the group’s resilience.”

“Although there has been only limited relocation of foreign fighters from the region to other conflict zones, member states are concerned about the possibility of such movement, in particular to Afghanistan, should the environment there become more hospitable to ISIL or groups aligned with al-Qaida,” the panel said.

In Central, South and Southeast Asia, the experts said Islamic State and al-Qaida affiliates continue to operate “notwithstanding key leadership losses in some cases and sustained pressure from security forces.”

The experts said the status of al-Qaida leader Ayman al-Zawahiri “is unknown,” and if he is alive several unnamed member states “assess that he is ailing, leading to an acute leadership challenge for al-Qaida.”