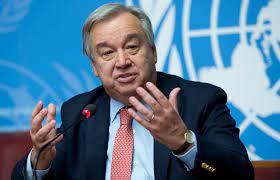 The UN secretary general urged Sudan’s generals on Sunday to reverse their takeover of the country, a day after tens of thousands of people took to the streets in the largest pro-democracy protest since last week’s coup.

Antonio Guterres said the generals should “take heed” of Saturday’s protests. “Time to go back to the legitimate constitutional arrangements,” he said in a tweet.

He was referring to a power-sharing deal that established joint military-civilian rule following the ouster of long-time autocrat Omar al-Bashir and his Islamist government in April 2019.

The UN envoy for Sudan, Volker Perthes, meanwhile, said he met Sunday with Abdalla Hamdok, the deposed prime minister who remained under house arrest in the capital Khartoum.

“We discussed options for mediation and the way forward for Sudan. I will continue these efforts with other Sudanese stakeholders,” he said.

Since last week, UN representatives have shuttled between the military and leaders of the pro-democracy movement.

A military official said that other efforts are underway, also supported by the UN but conducted by a Sudanese committee that began separate meetings last week with Hamdok and coup leader Gen Abdel-Fattah Burhan.

The official, speaking on condition of anonymity as he wasn’t authorised to release the information, said that Hamdok is still the main candidate for heading a Cabinet that would report to the leading generals. But should he not accept, other Sudanese figures could.

It remains unclear what mandate such a government would have. Burhan had repeatedly said in the weeks prior to the takeover that the military will hand over power only to an elected government.

Before the coup, Sudan was ruled by a transitional government that included a joint military-civilian sovereign council and a Cabinet, headed by Hamdok, that ran the day-to-day affairs.

The official said in these negotiations, the prime minister has insisted on the release of all government officials and political leaders arrested since the coup, before engaging in “meaningful talks” to form a new government.

Hamdok also demanded the return to the pre-coup constitutional order that would set a deadline by which the complete leadership of the country would be handed over to civilians, he said.

Burhan has given an initial approval to release the majority of the detained officials, but said a few must remain in custody for allegedly playing a role in a coup attempt that was thwarted in September, the official said.

He added that another issue is semantic – the military does not consider their takeover as a coup, arguing that they had already been part of the ruling government.

Burhan said he would install a new technocrat government soon, with the aim of holding elections in July 2023. But the pro-democracy movement also fears the military has no intention of easing its grip and will appoint politicians it can control.

Any new prime minister besides Hamdok would also likely face rejection by the pro-democracy protesters.

Eric Reeves, a Sudan expert at Smith College, said the standoff between the military and the protest leaders is likely to be prolonged, given that pro-democracy protesters see the takeover as “a naked power grab.”

“Neither side – civilian and military – has an easy way to climb back or down from the crisis,” he said.

He called on the US and the European Union to pressure Saudi Arabia, the United Arab Emirates, and Egypt – the main backers of the Sudanese generals, to not offer assistance to a military-led government, especially to shore up Sudan’s already battered economy.

Burhan has claimed that the takeover was necessary to prevent a civil war, citing what he said were growing divisions among political groups. However, the takeover came less than a month before he was to have handed some power to a civilian.

The Sudanese Professionals’ Association, which was in the forefront of the uprising against al-Bashir and now leads the anti-coup protests, insists on the removal of Burhan-led military council and holding those behind the takeover accountable.

“We need a full civilian government after our two-year experience with the generals,” said Mohammed Yousef al-Mustafa, a spokesman for association.

Many businesses and shops, meanwhile, remain shut in Khartoum and its twin city of Omdurman, in response to calls from the protest movement for strikes and civil disobedience.

Authorities have also reopened many roads and bridges linking Khartoum neighbourhoods on the sides of the Nile River. Other remained blocked by makeshift barricades set up by protesters overnight.

The protests on Saturday were the biggest so far since the coup. Security forces shot dead three protesters in Omdurman during the protests, bringing the tally to at least 12 dead and over 280 wounded since Monday, according to the Sudan Doctors’ Committee.

The Sudanese police said its forces did not use live ammunition against protesters on Saturday.

Guterres, the UN chief, expressed concern about violence against protesters on Saturday, calling for perpetrators to be held accountable.