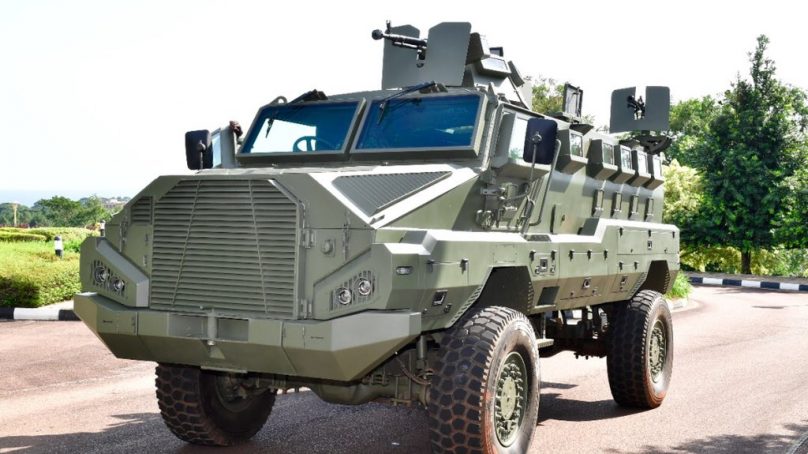 The Uganda People’s Defence Force (UPDF) has commissioned the locally manufactured Chui (Leopard) infantry fighting vehicle (IFV), which is based on Twiga’s recently launched Nyati but incorporating elements required by the Land Forces of the UPDF.

The Chui was commissioned by President Yoweri Museveni, Commander-in-Chief of the UPDF, during a function at State House in Entebbe on 18 October.

According to Land Forces commander, Lieutenant General Muhoozi Kainerugaba, the new vehicle is manufactured in Uganda by the Armoured Vehicle Manufacturing and Assembly Facility in Maga Maga, near Jinja, which has also manufactured the Nyoka armoured personnel carrier and Nyoka weapons platform.

Uganda’s variant of the Nyati is designed to meet the harsh conditions of Eastern and Central Africa. The Chui variant is being built in Uganda under a technology transfer agreement to further contribute to the growth of the country’s defence industry. Variants of the Chui include a mortar platform, recoilless gun platform and battle-field ambulance.

Twiga began development of the Nyati at the end of 2018, partly as an in-house project to meet the requirements of a modern 4×4 infantry fighting vehicle (IFV) using South African battle experience, and partly for a potential export customer. Vehicle trials began in early 2019 and testing and evaluation was completed in early 2021, with production from mid-year.

Damian de Lange, CEO of Twiga, said the Nyati stands out as a modern, powerful 4×4 Infantry Fighting vehicle that is standard STANAG Level 2 protected. The main components provide reliability, maintainability and support into the future, which is key and the pricing of the Nyati is very competitive. An added advantage is that the Nyati has been designed and developed to enable the Transfer of Technology.

“The fact that a tried and tested African fighting force has carefully selected our latest armoured vehicle for their local manufacture and battlefield use is an indication of the value that is placed on South African defence industry capabilities. It is these small contributions that we wish would be supported by our government,” said de Lange.

Twiga said the Nyati is a well-protected 4×4 that uses modern main components while keeping unit costs low. It is mine- and ballistically-protected, with standard NATO STANAG Level 2 ballistic protection up to 7.62×39 mm armour piercing rounds; Level 4B blast protection protects up to 10 kg mines under the centre of the vehicle. The vehicle is suitable for a wide range of military, security, peacekeeping and policing operations.

The Nyati comes in a range of different variants suitable for a multitude of missions, including battlefield ambulance, explosive ordnance disposal, cash in transit protection vehicle, weapon platform, riot control with water cannon and VIP transporter.

The Nyati is powered by a 7.2 litre six-cylinder Mercedes Benz diesel engine developing 240 kW (322 hp) and driving an Allison automatic transmission, giving a top speed of 105 km/h and road range of around 850 km with 290 litres of fuel. A central tyre inflation system and run flat inserts ensure critical mobility.

Empty, the vehicle weights 11 800 kg and has a payload of 1 800 kg, which can include eight occupants in the rear of the vehicle (driver and co-driver sit up front). Access on the APC variant is via two front doors and two pneumatically operated rear doors. A turret can be mounted on the roof and accommodate weapons up to 20 mm. This can be either electrically or manually driven. In addition, two roof-mounted 7.62 mm machinegun mounts can be positioned on the rear of the roof, and there are 12 firing ports around the vehicle.

The vehicle is over 6.5 metres long, 2.7 metres wide and has a 3.8 metre wheelbase. It is 2.7 metres high and can be configured for left- or right-hand drive prior to deployment.

In 2012 the first two Nyokas were supplied for operational evaluation. In 2013 the manufacture and assembly of the Nyoka began in earnest in Uganda under a transfer of technology programme through the Armoured Vehicle Manufacturing and Assembly Facility at Maga Maga.

The Nyoka is based on the Mamba armoured personnel carrier and older Unimog driveline. The 6-tonne class Nyoka has ballistic protection equal to STANAG Level 1, and can withstand a 7kg mine blast. The armoured personnel carrier variant has three weapon mount positions on the roof whereas the Weapon Platform variant is used for the R107 rocket system and 82 mm mortar to provide indirect fire support for debussed troops.

Under a Transfer of Skills and Technology Programme, Ugandan technicians have been trained in armour welding, pneumatics, auto-electrical and mechanical skills needed to carry out manufacture of armoured vehicle hulls and the complete assembly of armoured vehicles.

Skills transfer and training is a key element of Twiga’s ethos, and this includes local manufacture, training and mentorship programmes, spares supply, and maintenance and technical support enabling the client to maintain and support its own equipment.

Twiga has also provided its 850 Military Patrol Boat (MPB) and 1050 Command Boat to Uganda under a contract from Impala Services and Logistics.