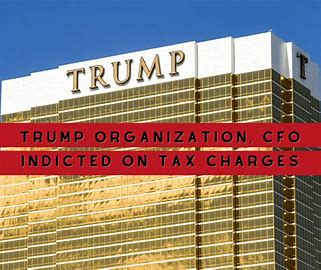 Prosecutors this week charged the Trump Organization and its chief financial officer with systematically and illegally evading taxes for years, largely by failing to report compensation.

The former president’s development firm and CFO Allen Weisselberg used a variety of schemes to cheat the government, according to an indictment that Manhattan District Attorney Cyrus Vance unveiled.

One, the company’s alleged payment of tuition for Weisselberg’s grandchildren, has already been reported; that amount was specified Thursday as $359,000. But the company also paid the rent and utility bills on his Manhattan apartment, leasing costs and garage fees for his and his wife’s Mercedes Benzes, and expenses for his house in Florida including beds, televisions, furniture and carpeting, officials said.

This allowed Weisselberg to understate his income by a total of $1.76 million from 2005 to 2017, saving the Trump Organization on payroll taxes in the process, the complaint alleges. And for most of those years, through 2013, Weisselberg filed taxes as a resident of Wantagh, New York, but was actually spending most of his nights in a Riverside Boulevard apartment building on the Upper West Side, formerly known as Trump Place.

This allegedly allowed him and the company to duck certain city taxes – in Weisselberg’s case, $210,923 in income taxes.

Weisselberg, who surrendered just after 6 a.m. Thursday, began filing tax returns from his city address after selling his suburban home in 2013.

Donald Trump and his legal team have portrayed the investigation as a political witch hunt and said many of the perks the CFO received are routine in American business. The firm and Weisselberg have denied doing anything illegal.

The Trump Organization also paid the CFO and other employees year-end bonuses from various Trump entities – including the Mar-a-Lago Club and Wollman Rink LLC – and reported them as non-employee compensation.

Weisselberg used the money to fund a Keogh account, which is a tax-advantaged retirement account for self-employed people. The government claims the payments were mischaracterized because the recipients were employees of the Trump Organization.

In one scheme alleged in the complaint, the Trump Organization wrote checks to an employee for what it recorded as “Holiday Entertainment,” but the employee cashed them and handed the proceeds to Weisselberg for his personal use.

That unreported compensation, which the CFO purportedly used to dole out holiday gratuities, amounted to $29,400 from 2011 through 2017.

In another, a Weisselberg relative was allowed to live rent-free in a Trump Organization–owned apartment on East 61st Street.

Experts have observed that the case against Weisselberg gives prosecutors leverage to persuade him to aide their probe of the Trump Organization and the former president.