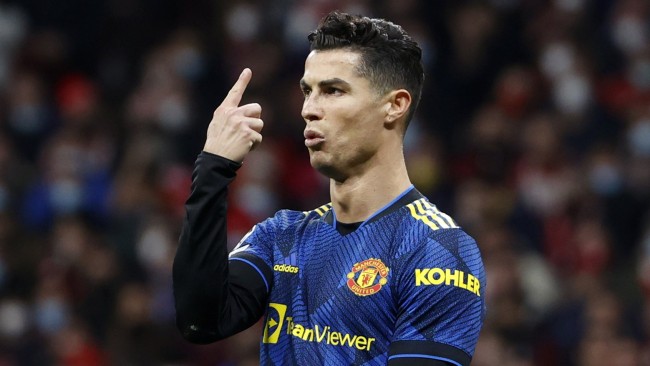 Ralf Rangnick could not believe how timid Manchester United were in the first half of their draw against Atletico Madrid, explaining what they must change in the second leg.

Man United eventually earned a draw from the first leg of their Champions League Last-16 tie. Anthony Elanga scored late on with their first shot on target after a disappointing team performance. His goal cancelled out Joao Felix’s early opener.

Interim manager Rangnick was not happy with how they played, particularly in the first half. He thinks they need to take more risks to break down a team like Atletico, says the paper.

Ronaldo, meanwhile, had another frustrating game for United as he failed to register a shot on target. In one incident in the first half, Ronaldo let his frustrations get the better of him as two crosses were delivered but he was the only United player in the box.

After the ball went out of play, Ronaldo threw his arms out and held up a single finger, highlighting the fact that he was the only United player attacking the ball.

“Cristiano Ronaldo on his own in the box,’ Ferdinand told BT Sport. “You’ve got an opportunity to cross the ball against Atletico Madrid away from home, you’ve got to get people in the box, more than one. Here you see the frustrations of someone like Cristiano. He had a quiet night to be fair to him.”

TeamTALK reports that, with the away goals rule no longer in place, the two sides will reconvene in Manchester next month all square. United will have to perform better if they are to ensure progress to the quarter-finals.

Rangnick told BT Sport: “I don’t know if I rescued it but after the performance in the first half, it could only get better. What we played in the first half I still cannot believe. We played without conviction, without aggression and that is why we were struggling.

“Second half we did better, more possession in areas that mattered and if we played another 10 minutes, we might have won the game. We have to play better in the first half. I was very disappointed by that performance in the first half.

“Against and with the ball we were far too apprehensive and did not take any risks. We only played it in our own half and then it is difficult against a team like Atletico. Their goal was difficult to defend, a brilliant cross and finish.

“We have to play with more conviction on the ball. We need more deep runs and the way we scored the goal was exactly that. This is how we have to play against them.”

Someone who has shown how United should be playing is young forward Elanga. His first-time finish across goal was a pivotal moment for United. Rangnick wants more of his squad to follow the Swede’s lead.

He said, “He is playing as though it is a dream come true. It is a joy and fun to watch him play. I wish a few other players would take him as an example and as a role model.”

At the opposite end of the pitch, Rangnick put Victor Lindelöf at right-back, with Harry Maguire and Raphael Varane at centre-half. He thought the plan would work, but conceding early on rendered it irrelevant.

As such, they had an uphill battle to bring a draw back for the return leg, which he hopes will go more in their favour.

Rangnick concluded, “Football is an important sport, even more so for the supporters, and it is a ball game. This is what I wish us to do especially in the second leg.”