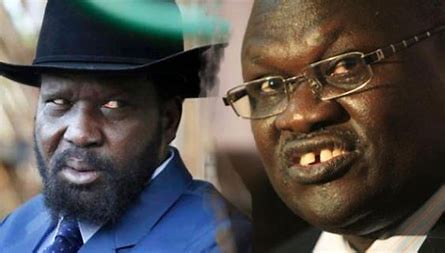 South Sudan crisis: Kiir remains deeply suspicious of his deputy, even refusing to allow him to leave the country

In April, President Salva Kiir Mayardit and Vice President Riek Machar re-committed to the peace deal they signed in 2018 that ended five years of civil war.

For that deal to work, efforts must be speeded up to unify the country’s security forces.

Unfortunately, the political dynamics that stalled security sector reform before still stand in the way. Implementing the other aspects of the 2018 Revitalised Agreement on the Resolution of Conflict in the Republic of South Sudan (R-ARCSS) is also lagging.

The agreement defined a 36-month transitional period (due to end in February 2023) to allow for constitutional reform, transitional justice, security sector reform and democratic elections.

The planned 2023 elections should motivate Kiir and Machar to shake hands, but the prospect of meaningful polls seems poor. The necessary groundwork set out in the R-ARCSS for credible elections, such as the constitutional review process, hasn’t yet been implemented.

So, while the election deadline may have triggered this latest show of solidarity between the president and vice-president, next year’s ballot – like security sector reform – is hostage to the country’s political dynamics. Despite Kiir and Machar’s stated commitment to peace, their self-interest, brinkmanship and sabotage are embedded in the political landscape.

South Sudan is still recovering from the civil war that broke out in 2013. The violence was triggered by a power struggle between Kiir and Machar over leadership of the Sudan People’s Liberation Movement – an armed militia turned liberation party that dominates the country’s politics.

The R-ARCSS, mediated by the region’s Intergovernmental Authority on Development, created a power-sharing government with Kiir at the helm and Machar as vice-president.

From the start, implementing the peace deal, especially provisions on unifying the security forces under one national command, has been tricky. Recent tentative signs of progress include Kiir’s order that Machar’s military officers be integrated into the army command.

This was to pave the way for the graduation of troops currently in cantonment camps. The camps were established after the 2018 peace agreement to screen and recruit Machar’s Sudan People’s Liberation Movement-in-Opposition (SPLM-IO) troops into the national security forces.

Several issues must still be ironed out, starting with Kiir’s apprehension about allowing Machar’s senior troops to keep their military rankings, which were inflated in anticipation of the unification. This left the SPLM-IO with a disproportionate number of officers and a bloated command structure.

The second problem is that a date hasn’t yet been set for the graduation and deployment of troops in the camps, despite the original two-month deadline. Around 50,000 troops are expected to graduate and be included in the army, police, prison services and fire brigade. Unifying the national security forces will swell numbers and aggravate an already high wage bill.

The third and fundamental issue is the rocky relationship between South Sudan’s leaders. It is still marked by suspicions and counter-accusations that may scupper not just security sector reform but the whole 2018 peace agreement.

The SPLM-IO and political opposition, under the South Sudan Opposition Movements Alliance banner, repeatedly complain that the South Sudan People’s Defence Forces (SSPDF) are attacking their troops. The SSPDF is the country’s national army consisting largely of Kiir-aligned soldiers who fought as the Sudan People’s Liberation Army.

Most recently, in March this year, Machar withdrew his forces from the Joint Transitional Security Committee and other security mechanisms, accusing them of being dysfunctional and ineffective. This came after the SSPDF clashed with opposition troops in Jekau and other towns in Maiwut County, Upper Nile State.

The SSPDF and SPLM-IO have traded blame over who attacked first, but the general patterns signal that government forces have instigated similar confrontations. Machar has since reversed the SPLM-IO’s withdrawal after his April agreement with Kiir on unifying the armed forces’ command.

The viability of the peace agreement depends on the level of trust between the country’s leaders, which is low. Kiir remains deeply suspicious of his deputy, even refusing to allow him to leave the country. He wouldn’t let Machar travel to Uganda in February and June, preventing critical meetings on implementing the peace deal.

President Salva Kiir doesn’t believe First Vice President Machar will return to South Sudan if he’s allowed to leave for talks. He may also be trying to limit Machar’s ability to access and garner sympathy from the international community.

External actors have used various forms of pressure to urge the leaders to meet the R-ARCSS’s milestones. In March the United States, United Kingdom and Norway Troika issued a strongly-worded statement against the SSPDF’s attacks on opposition forces and the SPLM-IO’s withdrawal from the unification process.

In May, just a few weeks after Kiir and Machar shook hands, the United Nations (UN) Security Council extended the arms embargo and sanctions on the country. But this pressure has had limited effect. Since security reforms depend primarily on the political will of the president and his deputy, the unification process is unlikely to get on track any time soon.

As UN Special Representative and Head of the UN Mission in South Sudan Nicholas Haysom suggests, a roadmap with clear timelines and priorities is needed to conclude the R-ARCSS transitional period with elections. Including the unification of the armed forces in such a roadmap could finally get things moving.