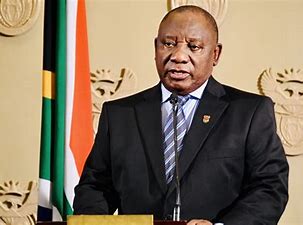 A statement confirming South Africa’s first citizen has shown, along with thousands of his countrymen and women, Covid-19 symptoms was released on Sunday by Minister in the Presidency, Mondli Gungubele.

The tasking of SAMHS medical and healthcare personnel for government VIPs is a standard operating procedure, in this instance working in conjunction with the full-time presidential medical team. Given Ramaphosa is said to be self-isolating in Cape Town, his immediate healthcare and observation needs are in all probability assigned to the command structure of two military hospital.

The Gungubele statement has it that Ramaphosa “started feeling unwell” after leaving a government approved memorial for former president FW de Klerk in Cape Town on Sunday.

“The president, who is fully vaccinated, is in self-isolation in Cape Town and has delegated all responsibilities to Deputy President David Mabuza for the next week.

“On his recent visit to four West African states, President Ramaphosa and the South African delegation were tested for Covid-19 in all countries.

“The president and the delegation returned to South Africa from Senegal on Wednesday, December 8, after obtaining negative test results. The president tested negative on his return to Johannesburg on  December 8,” the statement reads.

Ramaphosa is said to be in “good spirits”.