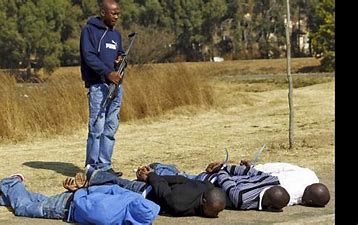 The annual crime statistics for 2020-21, released by Police Minister Bheki Cele in December, shows drops in virtually all types of violent crime in south Africa.

But these national statistics oversimplify the picture. There are major differences in crime across South Africa – and they must be well understood for responses to work. More nuanced policing and violence prevention are needed, rather than the one-size-fits-all approach reflected in police strategic and performance plans.

To support this, provincial and metropolitan governments should be given greater authority regarding policing – especially those that can shape policy in a useful way.

Provinces vary not only in their levels of urbanisation, economic activity, and demographic and geographic characteristics, but also the nature of violence and other crimes. Metropolitan areas often have distinct features that differentiate them from other parts of the provinces they’re in.

Murder figures provide a good example. During 2020-21 murders dropped in all nine provinces but there were major differences in the scale of the decline. South Africa’s murder rate is mainly driven by the high rates in three provinces – the Eastern Cape, Western Cape and KwaZulu-Natal (KZN). In 2020-21 both the Eastern and Western Cape recorded 55 murders per 100,000 people. KZN recorded 42 per 100,000.

The latest figures show that these three provinces recorded the lowest percentage of reductions in murder numbers. In the Eastern Cape, the level fell by four per cent, the Western Cape by three per cent and KZN by one per cent. In the six other provinces, murders dropped by an average of 13 per cent per province.

There are also major variations in how violence is distributed in each province. Murder in the Western Cape is concentrated in Cape Town. In 2019-20, 78 per cent of murders in the Western Cape happened in the city. A quarter of these are believed to be gang-related. Gang violence is concentrated in specific parts of Cape Town, mostly the Cape Flats.

The Eastern Cape’s other major metropolitan area, Buffalo City, recorded a murder rate of 42 per 100,000 – lower than Nelson Mandela Bay and all district municipalities in the province.

KZN’s major metropolitan area eThekwini accounted for 41 per cent of the province’s murders in 2019-20. Like in Eastern Cape, high murder rates outside this metro area contributed to the provincial murder rate of 42 per 100,000.

Gauteng, which is primarily composed of three major metropolitan areas – Johannesburg, Tshwane and Ekurhuleni metros – had a murder rate of 26 per 100,000 in 2020-21; less than half of those recorded in the Eastern and Western Cape.

Another difference between the provinces is in the weapons used. Data from the South African Medical Research Council’s (SAMRC) latest national survey of injury-related deaths, published in September 2021, shows that weapons like knives (‘sharp force’) account for 41 per cent of murders in South Africa. Firearms account for 32 per cent.

Different strategies are needed in different parts of the country to deal with the primary manifestations of violence. A continuing focus on gun violence is clearly required, particularly in the provinces where this has the biggest impact. But other aspects of violence must also be addressed. Interpersonal conflicts between acquaintances more frequently involves sharp force and blunt force weapons than firearms.

Rates and characteristics of other types of violent crime, including sexual offences, assault with intent to inflict grievous bodily harm, and aggravated robbery also vary between the different provinces and metropolitan areas.

Section 206(2) of South Africa’s constitution states that the national policing policy developed by the police minister ‘may make provision for different policies in respect of different provinces after taking into account the policing needs and priorities of these provinces.’ But a national policy that confronts the policing needs of the various provinces hasn’t been developed since the Constitution was passed in 1996.

South Africa needs a new, more effective set of arrangements that align crime and violence responses to the varying characteristics and needs in different parts of the country. This should include legislation empowering provinces and metropolitan governments to play a more active role in setting policing policy.  They should also be legally able to provide greater support to community-based initiatives working to prevent crime and violence.