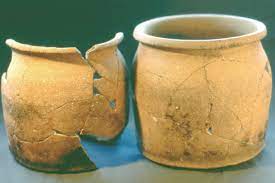 Unearthed from the graves of children, ceramic baby bottles from thousands of years ago would look perfectly at home in nurseries today. Some have little feet, and one bottle’s spout juts from a ceramic critter’s bottom like a tail.

These itty-bitty Bronze and Iron Age vessels smack of whimsy. But they, like many other everyday items used for feeding and food preparation, are providing scientists an unprecedented taste of how people ate long ago.

An examination of fatty molecules called lipids, for example, tucked into the pores of three ceramic bottles from Bavaria suggests that mothers living between 1200 BCE and 450 BCE were weaning or supplementing their kids’ diets with animal milk, Julie Dunne and her colleagues reported in 2019.

Dunne, a biomolecular archaeologist at the University of Bristol in England, speculates that the bottles’ creators may have been inspired to amuse their children. “They make us laugh today,” she says. More importantly, studying them “gives you such a close connection to the past.”

There aren’t many ways to study the feeding of infants in ancient times, Dunne says. Ancient bones have yielded insights about when infants were weaned, but “we know very little about how mothers brought up their babies.” The same is true of the eating lives of the ancients in general – much of the evidence has been indirect.

Archaeologists have long had little insight into how prehistoric mothers raised their babies. Degraded fats from baby bottles such as these roughly 3,000-year-old vessels from Vösendorf, Austria, suggest that Bronze Age mothers may have weaned their babies using animal milk.

Newer scientific techniques, added to a more inclusive view of the importance of everyday activities in archaeology, are leading to a clearer picture of what was on the prehistoric menu. Gathered from bottles, fragments of ceramic pots and even relics from Bronze Age grave sites, microbes and remnants of molecules offer a bevy of new clues about ancient cuisine.

“Archaeology is just like everything else,” Dunne says. “Women tend to get kind of left on the sidelines.” Traditionally, scholars have been more excited by the lives of kings and conquering warriors than those of mothers.

That’s one reason that “boring” archaeological items related to cuisine and cooking have been somewhat neglected, anthropological archaeologist Sarah Graff writes in the 2020 Annual Review of Anthropology.

Artifacts from the realm of food prep often belong to the domains of those who lack societal power: women, servants and slaves.

“A lot of early archaeology was about finding things that are beautiful and museum-worthy,” says Graff, of Arizona State University in Tempe. Bits of broken vessels or mundane-looking items from excavations were sometimes tossed aside with the dirt that wasn’t being analysed, she says. Earlier archaeologists “didn’t really think that things that had to do with domestic labour would have anything to do with politics or economics or even religion.”

Researchers are now finding more of those connections, Graff writes, and powerful analytical techniques are helping scientists mine ancient vessels to learn about the foods once prepared in them – from steaming stews to fermented beverages and cheese.

Earthenware pots were a game changer, Dunne says, and people invented them multiple times in different places. Ceramic vessels helped change what people ate – they could boil meat for stews, for example, or cook tubers long enough to destroy toxins.

Evershed and colleagues have exploited the tendency of fats to cling to pottery fragments to snoop on what people were stewing long ago.

Boiling meat releases globules of melted fat that easily seep into the walls of pots, Evershed says. He made his first identification of fats or lipids, from foods in ancient pottery around 30 years ago, in medieval shards from a site in England.

The chemical fingerprints suggested the leaf wax of cabbage, which was likely stewed with meats, Dunne notes.

In other work from the same site, the scientists identified a large number of pots dating from 950 to 1450 with signatures of dairy fat, probably from making cheese, Dunne says. No fat was detected on others, unearthed near a bygone bakehouse, and those pots are thought to have been used for baking bread. Tucking into stews, cheese, butter and bread, “the medieval peasant wasn’t doing too badly,” Dunne says.

Lipid residues couldn’t be analysed before the 1950s and the advent of gas chromatography, a method to detangle molecular mixtures. Coupling that technique with mass spectrometry, which helps identify molecules based on their mass, allowed researchers to detect and identify ages-old food remains. In the 1970s, researchers first applied this tag-team approach to archaeological artifacts.

These techniques have become still more sensitive and can now directly detect mere traces of chemicals. Recently, Evershed and colleagues reported the use of radiocarbon dating to find the age of leftover lipids in artifacts from as long as about 7,300 years ago. Previously, archaeologists couldn’t use radiocarbon dating on cooking residues, and had to infer their age by dating other evidence from the site, such as bones.

Such information also reassures researchers that the material they’re analysing is actually ancient and isn’t just contamination. “If you’re dealing with something that’s been buried in the ground for thousands of years,” you have to think about that possibility, Evershed says.

Molecules that look like they came from food could be from the soil surrounding an artifact or may have been introduced by unwitting excavators who handled pottery without gloves or stored it improperly. Evershed recalls a shard stored in a cheese box, not ideal for an item being analysed for food remains.

Along with analysing ancient leftovers, Evershed and his collaborators tackled the challenge of disentangling environmental contamination from food signatures. Decades ago, Evershed’s team cooked up cabbage leaves, for example, to see how its waxes infiltrated replica pots, giving them a comparison for the real specimens. The researchers also marinated pieces of pottery in flasks of compost to see how microbes may alter fats from milk or olive oil.