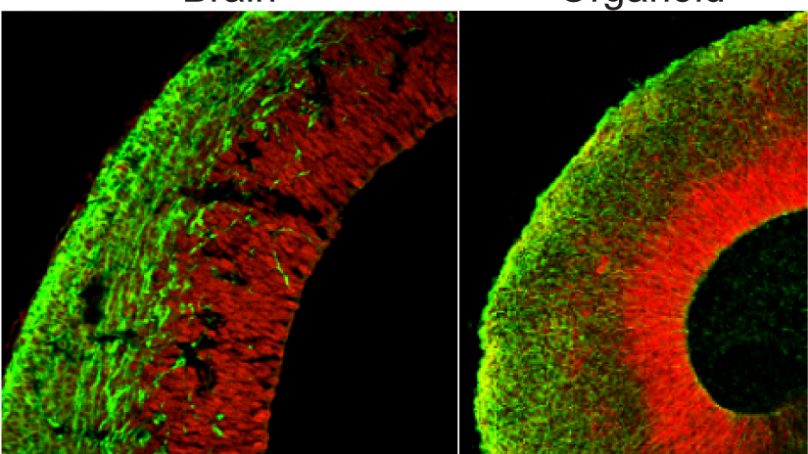 These tiny structures, known as brain organoids, are grown from human stem cells and have become a familiar fixture in many labs that study the properties of the brain.

Muotri, a neuroscientist at the University of California, San Diego (UCSD), has found some unusual ways to deploy his. He has connected organoids to walking robots, modified their genomes with Neanderthal genes, launched them into orbit aboard the International Space Station, and used them as models to develop more human-like artificial-intelligence systems.

Like many scientists, Muotri has temporarily pivoted to studying Covid-19, using brain organoids to test how drugs perform against the SARS-CoV-2 coronavirus.

But one experiment has drawn more scrutiny than the others. In August 2019, Muotri’s group published a paper in Cell Stem Cell reporting the creation of human brain organoids that produced coordinated waves of activity, resembling those seen in premature babies. The waves continued for months before the team shut the experiment down.

This type of brain-wide, coordinated electrical activity is one of the properties of a conscious brain. The team’s finding led ethicists and scientists to raise a host of moral and philosophical questions about whether organoids should be allowed to reach this level of advanced development, whether ‘conscious’ organoids might be entitled to special treatment and rights not afforded to other clumps of cells and the possibility that consciousness could be created from scratch.

The idea of bodiless, self-aware brains was already on the minds of many neuroscientists and bioethicists. Just a few months earlier, a team at Yale University in New Haven, Connecticut, announced that it had at least partially restored life to the brains of pigs that had been killed hours earlier.

By removing the brains from the pigs’ skulls and infusing them with a chemical cocktail, the researchers revived the neurons’ cellular functions and their ability to transmit electrical signals.

Other experiments, such as efforts to add human neurons to mouse brains, are raising questions, with some scientists and ethicists arguing that these experiments should not be allowed.

The studies have set the stage for a debate between those who want to avoid the creation of consciousness and those who see complex organoids as a means to study devastating human diseases. Muotri and many other neuroscientists think that human brain organoids could be the key to understanding uniquely human conditions such as autism and schizophrenia, which are impossible to study in detail in mouse models.

To achieve this goal, Muotri says, he and others might need to deliberately create consciousness.

Researchers are now calling for a set of guidelines, similar to those used in animal research, to guide the humane use of brain organoids and other experiments that could achieve consciousness.

In June, the US National Academies of Sciences, Engineering, and Medicine began a study with the aim of outlining the potential legal and ethical issues associated with brain organoids and human–animal chimaeras.

The concerns over lab-grown brains have also highlighted a blind spot: neuroscientists have no agreed way to define and measure consciousness.

Without a working definition, ethicists worry that it will be impossible to stop an experiment before it crosses a line.

The current crop of experiments could force the issue. If scientists become convinced that an organoid has gained consciousness, they might need to hurry up and agree on a theory of how that happened, says Anil Seth, a cognitive neuroscientist at the University of Sussex near Brighton, UK.

But, he says, if one person’s favoured theory deems the organoid conscious whereas another’s doesn’t, any confidence that consciousness has been attained vanishes.

“Confidence largely depends on what theory we believe in. It’s a circularity,” explains Seth.

Creating a conscious system might be a whole lot easier than defining it. Researchers and clinicians define consciousness in many different ways for various purposes, but it is hard to synthesise them into one neat operational definition that could be used to decide on the status of a lab-grown brain.

Physicians generally assess the level of consciousness in patients in a vegetative state on the basis of whether the person blinks or flinches in response to pain or other stimuli. Using electroencephalogram (EEG) readings, for instance, researchers can also measure how the brain responds when it is zapped with an electrical pulse.

A conscious brain will display much more complex, unpredictable electrical activity than one that is unconscious, which responds with simple, regular patterns.

But such tests might not adequately probe whether a person lacks consciousness. In brain-imaging studies of people who are in a coma or vegetative state, scientists have shown that unresponsive individuals can display some brain activity reminiscent of consciousness — such as activity in motor areas when asked to think about walking.

In any case, standard medical tests for consciousness are difficult to apply to brain cells grown in dishes, or disembodied animal brains. When Muotri suggested that his organoids’ firing patterns were just as complex as those seen in preterm infants, people were unsure what to make of that.

Some researchers don’t consider the brain activity in a preterm infant to be complex enough to be classed as conscious. And organoids can’t blink or recoil from a painful stimulus, so they wouldn’t pass the clinical test for consciousness.

By contrast, it’s much more likely that an intact brain from a recently killed pig has the necessary structures for consciousness, as well as wiring created by memories and experiences the animal had while it was alive.

“Thinking about a brain that has been filled with all this, it is hard to imagine that brain would be empty,” says Jeantine Lunshof, a philosopher and neuroethicist at Harvard University in Cambridge, Massachusetts.

“What they can do in terms of thinking I don’t know, but it’s for sure not zero,” says Lunshof. Bringing a dead brain back to a semblance of life, as the Yale team did, might have the potential to restore a degree of consciousness, although the scientists took pains to avoid this by using chemical blocking agents that prevented brain-wide activity.

Researchers agree that they need to take the possibilities raised by these studies seriously. In October 2019, UCSD held a conference of about a dozen neuroscientists and philosophers, together with students and members of the public, with the intention of establishing and publishing an ethical framework for future experiments.

But the paper has been delayed for months, partly because several of the authors could not agree on the basic requirements for consciousness.

Can consciousness be created in a laboratory?