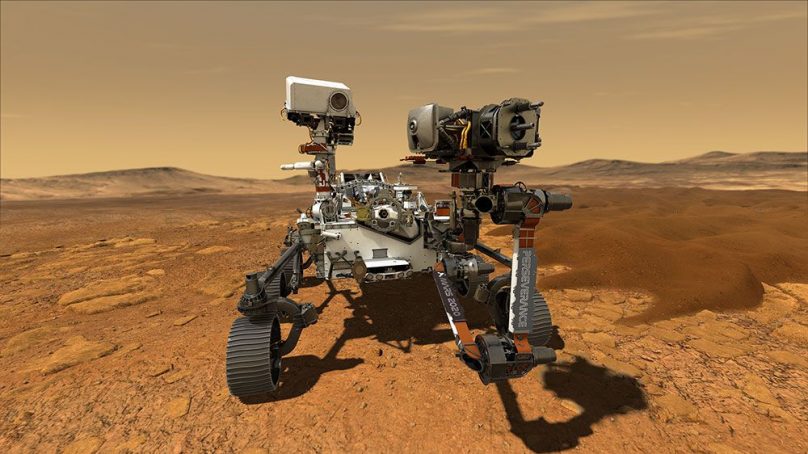 Humanity has just been given a front-row seat to a Mars landing, thanks to a high-resolution, full-colour video that NASA released of its Perseverance Rover descending into Jezero Crater on 18 February.

The video shows the drama of the spacecraft’s final descent, from the 21.5-metre-wide parachute billowing overhead to slow it down, to the dusty orange landscape of Jezero gently rocking below as Perseverance drifted downwards, to the final moments when the rover’s six corrugated wheels touched down on a flat, rock-studded surface.

This video – the first of its kind – shows how Perseverance landed on Mars. As it whizzes toward the surface, it deploys a parachute, then the sky crane carefully lowers the rover to the landing site, kicking up dust and debris in the process. The footage was captured by multiple cameras mounted on the rover, the sky crane and a shell that protected the rover at the start of the descent.

“You are getting a glimpse into what it would be like to land successfully into Jezero Crater with Perseverance,” says Matt Wallace, the mission’s deputy project manager at the Jet Propulsion Laboratory (JPL) in Pasadena, California. “This is the first time we’ve been able to see ourselves – to see our spacecraft – land on the surface of another planet.”

“These videos are the stuff of our dreams,” says Al Chen, an engineer at JPL who heads the entry, descent and landing team for Perseverance.

From above, NASA’s Mars Reconnaissance Orbiter, which launched in 2005 to study the planet’s geology, photographed the debris from the landing – the discarded parachute, heat shield and other components – spread out across Jezero.

Images taken by NASA’s Mars Reconnaissance Orbiter, showed where Perseverance’s landing gear struck Jezero Crater, relative to the rover. The ‘descent stage’ was the component that set the rover down in the final sky crane manoeuvre.

All systems on board the rover are working as planned, says JPL’s Jessica Samuels, the rover’s surface-mission manager. Over the weekend, it switched on its high-gain antenna, to communicate more efficiently with Earth, and raised a tall mast laden with cameras to survey its surroundings.

Initial images taken by the rover’s navigation cameras and stitched together into a 360-degree panorama show the high cliffs of an ancient river delta in the distance. That delta is the reason NASA sent Perseverance to Jezero, because the rocks might contain evidence of fossilised microbial life from more than 3.5 billion years ago. Perseverance is currently about two kilometres away from the delta.

Since it landed, the Perseverance rover has captured many images of its Mars surroundings and beamed them back to Earth. This panorama was stitched together from six of those individual images.

The rocks on the surface near the landing site come in several varieties, from small, light-coloured ones studded with holes close to the rover, to larger, darker-coloured versions farther away.

“We’re noticing the different colours that we see and textures and tones,” says Ken Williford of JPL, the mission’s deputy project scientist. Team geologists will study the rocks further to understand how they formed, including whether the holes in the ones nearby formed when gas burbled out of molten lava. That will allow scientists to piece together the geological history of the area.

A microphone on board Perseverance has also captured the sound of a 5-metre-per-second wind gust on the surface. It is the first audio ever recorded on Mars, other than seismic signals from NASA’s InSight lander that have been translated into audio.

In the coming days, Perseverance will straighten up its wheels and do a short drive, before unfolding and testing its robotic arm, which is laden with scientific instruments. Over the coming months and years, the rover will drive many kilometres, drilling into different types of rock and collecting samples of them. Future missions are planned to retrieve those specimens and bring them back to Earth, no earlier than 2031, for the first-ever sample return from Mars.