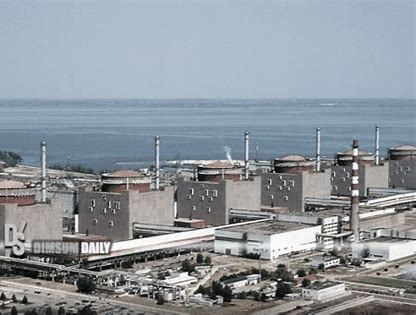 In early March, the world looked on in horror as a fire broke out at Europe’s largest nuclear power plant in southeast Ukraine. The blaze at the Zaporizhzhia facility following shelling by invading Russian forces was eventually brought under control.

No leaked radiation was reported, although the potential for catastrophe prompted Ukraine President Volodymyr Zelenskyy to accuse his Russian counterpart Vladimir Putin of “nuclear terrorism.”

“There are six nuclear reactors there,” Zelensky said of Zaporizhzhia. “In Chernobyl, it was one reactor that exploded, only one.”

By referencing Chernobyl – the nuclear power plant in northern Ukraine that became the site of the world’s worst nuclear disaster in 1986 – Zelensky was making the stakes very plain. But strange as it may sound, those scenes at Zaporizhzhia may inadvertently contribute to a new dawn for nuclear power.

The instability resulting from the Russian invasion – as well as mounting evidence of war crimes – has made finding alternatives to Russian oil and liquid natural gas (LNG) a policy priority for European nations who want to stop funding Putin’s war machine.

With few options that offer true energy sovereignty, there is now renewed enthusiasm for nuclear energy among politicians in Europe. On April 8, British Prime Minister Boris Johnson announced the UK would build up to eight new nuclear plants by 2030 to ensure “we are never again subject to the vagaries of global oil and gas prices” and “can’t be blackmailed by people like Vladimir Putin.”

Across Europe, there has been a growing acceptance that nuclear energy is a vital plinth of efforts to fight climate change, and Russia’s invasion of Ukraine has catalysed that trend by injecting a national security argument. And as a leader in revolutionary new nuclear technology, the US stands to be the chief geostrategic beneficiary of any revival. The question is whether engrained, ideological aversion to nuclear power in key stakeholder states, particularly Germany, will quell that momentum.

The ideal solution is to replace coal and oil with renewables like wind, solar and tidal power. However, despite some great advances in battery technology amid heaps of investment, there is still not a viable storage solution to provide power when the sun isn’t shining, or wind stops blowing. This means each nation’s energy portfolio requires a “firm” element.

The cheapest option is simply to swap out dirty coal for comparatively clean LNG, but Putin’s aggression has underscored the hidden costs of that approach. Not only is nuclear energy immune to the vicissitudes of oil and gas prices, it’s also a zero-carbon technology.

Beyond the practically uncountable damage greenhouse gas emissions inflict on the lives and livelihoods of people globally, the air pollution that results from burning fossil fuels directly led to 8.7 million deaths in 2018 alone, according to research published last year.

Meanwhile, despite the raft of high-profile disasters, historic fatalities from the civil nuclear industry are measured in the low thousands. In February, the EU classified nuclear energy as “green,” drawing a backlash from environmentalists who point to risks associated with accidents and nuclear waste.

But many energy experts counter that it’s a necessary element of a viable net-zero economy. “Nuclear power is an important source of low-carbon electricity and heat that can contribute to attaining carbon neutrality and hence help to mitigate climate change,” wrote Olga Algayerova, Executive Secretary of the United Nations Economic Commission for Europe, in a report published in the lead up to November’s COP26 climate talks.

And boosting the capacity of Europe’s existing nuclear reactors, which don’t normally run at full tilt, due to the growing inclusion of renewables, was one of the solutions the International Energy Agency (IEA) recently proposed to reduce European reliance on Russian LNG.

“The majority of countries in Europe will be even more pro-nuclear now,” says Kai Vetter, a professor of nuclear engineering at the University of California, Berkeley.

Even before the war in Ukraine, the IEA was saying that the nuclear industry must nearly double in size over the next two decades to meet global net-zero emissions targets. In 2018, the Intergovernmental Panel on Climate Change (IPCC) published a 400-page special report, “Global Warming of 1.5°C,” which offered four pathways to mitigate global temperature rises.

On the other hand, nuclear power remains deeply political in Europe, not least after the 2011 Fukushima meltdown in Japan reenergised anti-nuclear advocates in the region. Perhaps the most important country opposing nuclear is Germany, which also happens to be the EU’s largest user of Russian energy. Germany’s ruling coalition partner Green Party has its roots as an advocacy group specifically in opposition to nuclear energy, and the country was about to take its nuclear power offline when the war began.

As Russian tanks rolled into Ukraine in February, Robert Habeck, German Vice-Chancellor and a Green Party leader, said he wouldn’t rule out extending the life of Germany’s three remaining nuclear plants on “ideological” grounds. But he soon backtracked and insisted decommissioning would take place as planned.

Instead, Germany has gone cap in hand to Qatar and the UAE to seek alternative sources of liquid natural gas despite climate and human-rights concerns. “It’s so incomprehensible,” says Vetter. “There’s amazing naiveté in Germany in my opinion.”