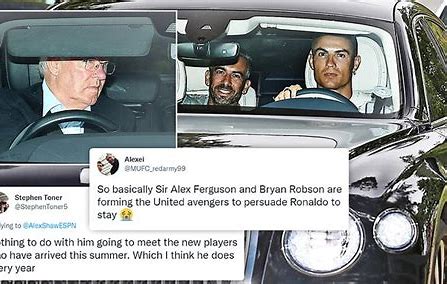 Sir Alex Ferguson arrived at Manchester United’s training ground on Tuesday as Cristiano Ronaldo held talks with the club’s hierarchy over his future. Ronaldo has been pushing to leave United this summer but so far there have been no takers for the 37-year-old.

However, after the Tuesday, CR7 looks likely to stay put, with the new season only two weeks away.

Bayern Munich and Chelsea have been offered the chance to sign Ronaldo but both clubs have ruled out a move. Sir Alex attended the Carrington meeting as did Ronaldo’s agent Jorge Mendes.

The super-agent is continuing to work on finding Ronaldo a new club and has offered the 37-year-old to a number of European giants. Chelsea, Bayern Munich and Barcelona were all presented with the chance to land the seasoned veteran but all three clubs turned down the opening.

The legendary Manchester United manager volunteered to be involved in United’s plan to convince Ronaldo to stay with the club for the upcoming season, as Mendes continues to push his client towards the exit door. According to the Manchester Evening News, Ferguson was spotted arriving at United’s training complex on Tuesday morning.

Atletico Madrid are now reportedly Ronaldo’s preferred destination of choice, although they must raise significant funds in order to make a play for the forward.

Although the reasons for his attendance are unspecified, Sir Alex was is expected to hold dialogue with Ronaldo to help United resolve his future. Erik ten Hag is due to meet with his new striker for face-to-face talks to determine whether he is committed to United ahead of the 2022-23 campaign.

Ronaldo did not join up with United’s squad for their pre-season tour of the Far East and Australia and has been training alone in Portugal due to family reasons. He returned to Manchester on Monday evening ahead of fresh talks with new manager Erik ten Hag and United’s CEO Richard Arnold.

On Tuesday, Ronaldo returned to Carrington for the first time this summer and was joined by his agent Jorge Mendes, who has been negotiating the forward’s departure for several weeks.

Ferguson, who has a close relationship with Ronaldo following their six years together at Old Trafford, also made a rare appearance at Carrington. The 80-year-old played a key role in convincing Ronaldo to return to United last year and will be pushing for his former player to remain part of Ten Hag’s squad.

When asked for an update on Ronaldo’s situation last week, Ten Hag replied, “No. It’s the same as last week. Of course, concerning is maybe not the right word [over his absence]. I focus on the players who are there and they are doing really well. They are in good shape and I have further focus on that and develop that. I cannot wait for him to come in and then we will integrate him.”

United’s two new signings Christian Eriksen and Lisandro Martinez, who is joining in a £55 million deal from Ajax, also arrived at Carrington together on Tuesday.

Ten Hag is willing to work with Ronaldo for the final year of his contract (although it does contain the option for an additional 12 months) but with the season less than two weeks out, United need commitment from their player.

When speaking on Ronaldo’s future last week, Ten Hag conceded that he has to focus his energy on the players that are committed to the club.

“It is the same as last week,” said Ten Hag when quizzed on his future. “Of course. But concerning is maybe not the right word. I focus on the players who are there, they are doing really well, they are in good shape. I prefer to focus on that and develop that. I cannot wait for him to come in, then we will integrate him.”