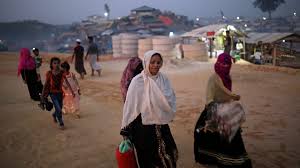 A climate of fear has spread across Bangladesh’s sprawling Rohingya camps as militant groups and criminal gangs compete for control, refugees and humanitarians warn.

Community leaders and female Rohingya in particular are threatened and intimidated for being educated or outspoken about women’s rights, stretching conservative norms to a level of oppression.

Women report being harassed, kidnapped, attacked or extorted by men they believe are affiliated with Rohingya militant groups or gangs. Some women say they have been told not to work outside the home. Others say assailants demand a cut of their earnings.

Most say they are afraid to leave their homes at night, when there’s little security and government-imposed curfews bar aid workers from staying past 4 pm. For some women, the frustrations and fears have reached a point where silence is no longer an option.

“It’s happening everywhere, but nobody is talking about it,” said Mariam, a Rohingya civil society activist, who asked to be identified by a pseudonym for fear of retaliation.

These threats have long been an issue in the camps, which are now home to some 900,000 people after a Myanmar military purge forced hundreds of thousands of Rohingya from their homes in 2017. But refugees and aid groups say the violence has reached a crisis point in recent months, partly due to government-imposed coronavirus restrictions that have shrunk the number of aid staff allowed in the camps.

“It’s happening everywhere, but nobody is talking about it.” Facing threats of severe violence, some Rohingya women have stopped volunteering with aid agencies, leading to potential shortfalls of teachers and health outreach workers.

Interviewed, six Rohingya women say they were told to stop working, were pressured to hand over money or were physically abused. They said they wanted their stories to be told and for the problem to be discussed publicly.

Similar accounts were corroborated in interviews with a dozen aid workers, researchers, other refugees and a government official.

“Before coming here, we were scared the Bangladeshis would be rough with us. Now our own people are,” said a woman leader, whose family member was kidnapped for several hours by a group suspected of extorting money in her camp.

None of the women said they dared to seek help from the Bangladeshi police or authorities that oversee the refugee camps, where there is no formal justice system and crimes routinely go unpunished.

“There’s nowhere for us to complain,” said a female community organiser, who is regularly threatened online because she has an education, and is forced to pay “taxes” on her NGO salary. She said she knows of young women who were abducted and worries that she could be as well.

The women believe the threats and abuses are perpetrated by a militant group known as the Arakan Rohingya Salvation Arm or ARSA. But gangs and other criminal groups also operate in the camps, and affiliations are difficult to verify, even for refugees themselves.

A government official in Cox’s Bazar said that “simple criminals” were behind the threats to women. “There is no such thing as ARSA in the camp,” he said, asking not to be named because the issue was considered sensitive.

Among refugees, however, the perceived influence of ARSA is so extensive that some dub them “the night government”.  Mariam said the threats against her have grown so severe that she won’t leave her tent home to use the toilets at night.

Weeks ago, she started receiving online abuse after she wrote a Facebook post that supported women’s rights. “They asked me which way I would prefer to be abused,” she said, sitting hunched over on a chair in a quiet corner of a community centre.

Rozina, another Rohingya woman, stopped working with a female empowerment NGO several months ago after she was threatened by people, she believes to be members of ARSA.

The men, dressed in black, banged on the door of her family’s shelter one night. They demanded that she leave her job; they told her that it goes against the culture of the mainly Muslim Rohingya community for women to work.

“‘If you don’t obey, we will take you out of your house,’” Rozina remembered them saying. She reluctantly agreed, well aware of stories from other women who had been kidnapped or abused for not obeying.