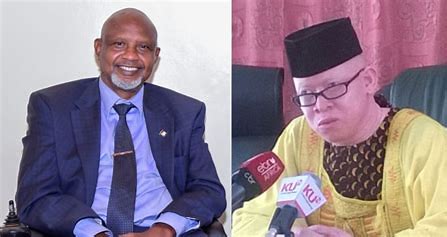 Troubled ruling party in Kenya, Jubilee, moved with speed to replace axed Nominated MP Isaac Mwaura with Sammy Leshore for Special Seat for people with disability in the Senate.

The latest change happens on the back of a flurry of similar actions in parliamentary leadership that has seen a number of chairmen of high-profile committees loyal to President Uhuru Kenyatta and his bitter rival-turned-bosom-friend Raila Odinga.

Mr Kenyatta and Mr Odinga are pushing for constitutional amendments that have already been forced through county assemblies and Parliament and which, if passed, in a referendum later in the year will necessitate sweeping changes in the three arms of government – executive, legislature and judiciary.

The amendments have elicited strong resistance from political activists who argue the amendments are premature and unnecessary since the 2010 constitution has not been fully implemented.

Mr Leshore’s nomination was announced by the Independent Electoral and Boundaries Commission (IEBC) in a Special Gazette Issue dated May 11 and signed by chairman Wafula Chebukati, said, “The deleted Nominee (Isaac Mwaura) stands disqualified as the member to the Senate representing persons with disabilities.”

Consequently, is Mwaura is replaced by Leshore, who in 2000 was himself disabled by a gunshot in an armed attack in Nairobi by unknown people. Leshore, then MP for Samburu East and ruling party Kanu’s chief and his Lagdera constituency compatriot Mohammed Shidiye were flown to London for treatment for severe injuries.

Raucous Isaac Mwaura tripped himself when he launched tirades against President Kenyatta’s family for the economic collapse of the country and a trigger of ethnic tensions that have in past 20 years brought Kenya on the brink of a civil war. Mwaura, who was first nominated to parliament by Odinga’s Orange Democratic Movement in 2013, dumped his initial benefactor to drum up support for Kenyatta in the 2017 elections and was rewarded with a nomination to the Senate.

As ties between Kenyatta and his deputy William Ruto began to crack, Mwaura initially vouched for Kenyatta and accused the deputy president of being at the heart of theft of public resources. Later, Mwaura kicked off the tirade against Kenyatta in February at a ceremony to celebrate the victory of newly-elected Msambweni MP Feisal Bader, who vied as an independent candidate in a by-election the president’s party, supported by the opposition, had been expected to roll to victory.

During the event and in subsequent public pronouncements Mwaura castigated the Kenyatta family for allegedly “eating Kenya” to the level that his successor would have nothing to build on. “Eating” in Kenya is a metaphor for corruption or fraud and features frequently in the country’s political idiom.

Reaction to Mwaura utterances against the Kenyatta’s was fast and furious, with ODM’s Junet Mohammed labelling him a “political prostitute” in reference to the former nominated MP’s lack ideology and moral standing.

Lawyer Donald B. Kipkorir posted on Twitter, “Isaac Mwaura should stop using a seat for the disabled to engage in insults and prostitution. He should man up, surrender the seat, then be free in his politics of looking for the next nomination. He is the poster child of politics without principles and monetising disability.”

Leshore returns to parliament at a time MPs have issued a red alert over their safety, while others face the threat of losing their firearms and bodyguards on account of misuse.

The attack on Leshore and his fellow MP Mohammed Shidiye forced the government to relent on its resistance to arming the legislators, in addition to bodyguards. The budget for parliament ballooned to $3.5 million, hence the government’s initial reluctance to the MPs’ demands.