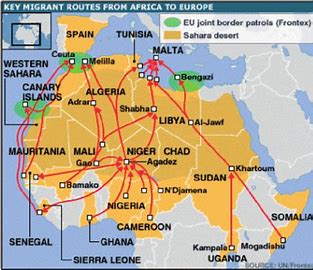 Because narratives about migration are dominated by media, politicians, and researchers in the Global North, Joseph Teye, director of the Centre for Migration Studies at the University of Ghana and co-director of MIDEQ, told The New Humanitarian. “Not everybody is moving to the Global North,” he noted. “The narratives have to change, and the narratives can only change when we decolonise the knowledge.”

The New Humanitarian: What exactly is South-South migration, why is it overlooked by media narratives driven by the Global North, and what is important to understand about it that is absent from those narratives?

Teye: Things are changing in recent years. For instance, the European Union, the UK, and other governments are beginning to fund research within the Global South. But still there’s a lot to be done when it comes to South-South migration. If you look at the volume of publications on South-North migration, it’s much higher than what is published on South-South.

The New Humanitarian: What is the relationship between migration and inequality, both within and between countries?

Teye: On one hand, migration can be driven by inequality between countries, and inequalities also influence who migrates. Even when people are faced with the same economic challenges, the same environmental challenges, not all of them will be able to migrate. Especially if you are talking about migrating to Europe from Africa, you need some resources.

There are also gender differences. Sometimes you have patriarchal norms, rules, traditions that will not allow women to migrate. Gender inequalities can prevent some people from migrating.

Migration can also cause inequality. Poor migrants often experience labour exploitation, and rich migrants can exploit the labour of people in the countries they move to. When people move from relatively more developed countries to poorer countries, they can also contribute to destroying the environment. For example, people have moved to West African countries to extract resources, and then they are not implementing proper environmental management strategies. That is a source of inequality.

But migration can also reduce inequality. So, if the poor get the chance to migrate and then they are able to work, it means that the inequality gap is being closed. Some people can only do well if they migrate. That is why migration is good.

If you look at climate change, for instance, in areas seriously affected by environmental stress – no rainfall, they are not able to produce – such as in the Sahel region in West Africa – then one of the surest ways to reduce the inequality between those communities and other better off communities will be migration. People also migrate to enhance the livelihoods of their families left behind. So poor families have the money to send one person to another country and he finds a good job, remittances sent back can help to reduce inequality.

The New Humanitarian: What impact has the Covid-19 pandemic had on the inequalities associated with migration?

Teye: Specifically in the China-Ghana corridor, the suspension of flights between the two countries affected regular migration flows. In both countries, rich migrants were able to migrate through chartered flights while the low-skilled migrants were trapped. They were also not able to work, which means that they faced more problems.

The economic challenges that we are facing due to restrictions are also worse when we talk about those that are poor. In China, those that were working for companies were able to receive their salaries and work from home whereas those who were working as domestic workers and others could not work. In Ghana, migrants in the informal sector were hit hard because they could not work during lockdown.

In Ghana, and most West African countries, governments have now opened the borders for airlines, but then they are not opening the land borders, and the land borders are used by poorer people. So poorer people are still restricted. They are trapped. When it comes to access to healthcare, it was also the same thing. Many of the poor migrants struggle to access Covid-19 tests, vaccination, or treatment.

The stimulus packages that were implemented by governments also did not benefit the poor. In Ghana, for instance, a lot of money was pumped in to help businesses to survive during Covid. But the business needed to be registered. Many of the immigrant businesses are not registered because they are small-scale businesses in the informal sector, so they didn’t qualify to get the stimulus packages that were being given out.

Teye: Humanitarian crises are leading to increased South-South migration, especially related to climate change. For example, parts of Burkina Faso, Niger, Nigeria, and Chad are all facing climate change, which is also producing insecurity in the region because you have conflicts as a result of limited resources. Food insecurity has also increased famine and caused people to move within those countries. Most of these people are not able to move internationally.

When people are moving from West Africa to Europe, most of them will pass through Agadez, Niger. But most of the people migrating from Niger do not go to Europe. They come south to Cote d’Ivoire and Ghana because these are relatively poor communities. They don’t have the resources to go to Europe. So, poor people fleeing areas facing environmental challenges are likely to move just short distances.

The New Humanitarian: You mentioned that the funding situation for research on South-South migration has improved a little bit recently. But MIDEQ has been affected by the funding cuts in the UK. What impact are those cuts having on the project?

We were looking at how to engage policymakers and communities to maximise the developmental benefits of migration, protect the human rights of migrants, and ensure our findings were used to contribute to the achievement of the SDGs. All of these things are at risk now.

If MIDEQ ends because of budget cuts, it means that there will be no major project in the world looking at South-South migration.

South-South migration is often overlooked and South-North given prominence, why?