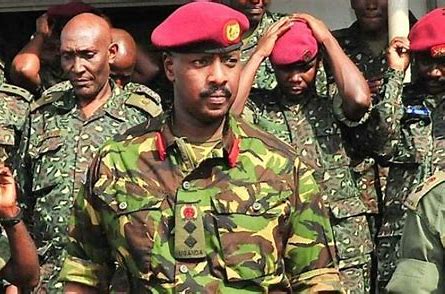 Public fetes celebrating the son of Uganda’s leader are raising concern that he is aiming for the presidency after years of apparently being groomed to succeed his father, President Yoweri Museveni, who has held power since 1986.

Three events marking Lt-Gen Muhoozi Kainerugaba’s 48th birthday have been held in recent days in the capital, Kampala, and his supporters in other parts of this East African country have staged lively rallies they said were in tribute to their future president.

The most recent event, Saturday’s thanksgiving ceremony, was attended by hundreds, including top government officials and military officers.

Kainerugaba, who commands Uganda’s infantry forces, has been increasingly assertive in Twitter posts in which he mentions his wish to rule Uganda. He spoke of increasing the sports budget in favour of young people when he “wins power in this country.” And he says he will announce his political program soon.

“The fact that all those who used to abuse me on a daily basis are now being forced to swallow their words by the people is great,” he said on May 2, referring to recent rallies where throngs of people wore T-shirts bearing his image.

Kainerugaba’s supporters say he offers Uganda the opportunity of a peaceful transfer of power in a country that has not had one since independence from British colonial rule in 1962. But opposition leaders, critics and others eager for change say his rise is leading the East African country toward hereditary rule.

Kainerugaba’s birthday celebrations should be seen as a formal introduction of “the crown prince and heir to the Ugandan throne,” critic Muniini K. Mulera wrote in a column in the local Daily Monitor newspaper. Museveni “has entered his last lap of a long walk towards the realization of a fifty-year-old dream to create dynastic rule,” he wrote.

Kainerugaba also faces legal scrutiny. Because Ugandan law prohibits a serving military officer from engaging in partisan affairs, some say Kainerugaba has already crossed the line. They point out that other army officers who discussed politics were humiliated.

A Ugandan attorney last week filed a petition with the Constitutional Court seeking a declaration that Kainerugaba’s political activities are unlawful. That petition also seeks to have Kainerugaba prosecuted for alleged treason, charging that his activities are destabilising.

Kainerugaba joined the army in the late 1990s, and his rise to the top of the armed forces has been controversial, with critics dubbing it the “Muhoozi Project” to prepare him for the presidency.

Museveni and Kainerugaba himself have denied the existence of such a scheme, but it appears a transition is now underway as Museveni, 77, serves what could be his last term without a recognisable successor within his government.

Museveni has not said when he would retire. He has no rivals within the ruling National Resistance Movement party – the reason many believe the military will have a say in choosing his successor.

Most of the heroes of the jungle war that ended years-long civil strife and launched Museveni’s presidency have since died or been retired from the army, putting authority in the hands of young military officers who see Kainerugaba as their leader.

Kainerugaba, the pillar of his father’s personal security apparatus, is now the de facto head of the military, with his allies strategically deployed in command positions across the security services, according to observers.

Kainerugaba’s associates describe him as a dedicated military officer who often eschews ostentatious displays of power and wealth. He attended military schools in the US and Britain before taking charge of a presidential guard unit that has since been expanded into an elite group of special forces.

A taciturn man, Kainerugaba lacks the public charisma and folksy style of Museveni, who has kept power in part by striking deals with his political rivals and even convincing some to serve in his government.

Museveni, a US ally on regional security, is often credited with restoring Uganda to relative peace and security. But in recent years he has faced growing criticism over rights abuses against opposition supporters.

Bobi Wine, the popular singer who challenged Museveni in elections last year, accuses Kainerugaba’s security agents of torture. Wine, whose real name is Kyagulanyi Ssentamu, has repeatedly urged the US to cut support for Uganda’s military.

Some analysts say that Museveni is unlikely to retire at all but could use his remaining years to pave the way for Kainerugaba to succeed him. Uganda’s next presidential elections are due in 2026.

Although a Kainerugaba presidency is not inevitable, he could build “a critical mass of support” among soldiers and business people to eventually take power, said Nicholas Sengoba, a political analyst based in Kampala. Kainerugaba’s public events, he said, are aimed at “testing the waters” as Museveni gauges public support for family rule.

“The son helps the father to consolidate,” he said. “The father helps the son now because he’s in charge.”

Ties that bind us: After Russia attacked Ukraine, weak links in finance and supply chains were easily weaponised