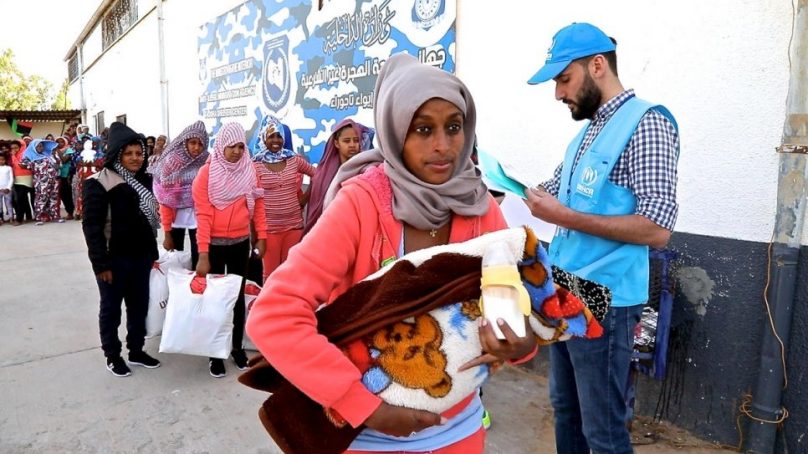 “The protection response cannot be just about distributing food and relief items,” Lucie Eches, from the Médecins Sans Frontières (MSF) protection team in Libya, pointed out. “The only meaningful protection is to provide safe shelter from abusers and immediate evacuation.”

During several reporting trips to Libya between October 2020 and March 2021, The New Humanitarian discovered just how ineffective the process of closing the detention centre in Zintan was – as well as the extent of the failures to account for the needs of former detainees.

“I am lucky to survive from Zintan,” Tumzi, a 34-year-old Eritrean asylum seeker who spent more than two years in the Dhar el-Jebel detention centre in the town, says. “I am lucky to be here and speak as a witness.”

Like tens of thousands of other Eritreans, Tumzi fled his home in 2009 to escape the country’s mandatory, indefinite military conscription. In the intervening years, he struggled to find stability and a safe place to call home – first venturing to Israel, only to then be deported to Uganda. Eventually, he made his way through Sudan to Libya in 2017 with the hope of crossing the Mediterranean and reaching Europe.

Instead, Tumzi ended up trapped in Libya’s detention centres. After being intercepted at sea in 2018 by the Libyan Coast Guard, he was sent to a centre close to the airport in Tripoli. When that facility got caught in the crossfire during a battle for control of the city in the summer of 2018, Tumzi was transferred to the centre in Zintan, located in the mountains to the south.

Conditions inside Dhar el-Jebel were horrendous, according to Tumzi, and the centre’s remote location made it difficult for the UN’s refugee agency, UNHCR, and other international organisations to visit and provide aid.

Around 700 asylum seekers and migrants were held in an overcrowded hangar with only four toilets, no showers, and sporadic access to water that was unsuitable for drinking, according to an MSF report. The head of the centre would withhold food from detainees as a form of punishment, and at least 22 people died of tuberculosis during an outbreak in 2019. More than 100 others fell sick.

After the outbreak, the population of the detention centre dwindled as some people paid bribes to leave and others escaped. The decision to finally close the facility appears to have been made in early December 2020, according to a leaked email from the UN’s emergency aid coordination body, OCHA, seen by The New Humanitarian.

There were 325 asylum seekers and migrants in the detention centre at the time, and the DCIM had agreed to release them and help transfer them to Tripoli over the course of about a week.

The closure was supposed to be completed by mid-December but was held up by negotiations between the DCIM and UNHCR over how many guards were needed to provide security during the transfer, and by the DCIM’s request for UNHCR to pay for their services during the process, according to Abd al-Hafiz.

“We need the official police escort, so this took time to get agreement from the authorities,” Jean-Paul Cavalieri, UNHCR’s head of mission for Libya, told The New Humanitarian. “It took time also to inform the people and asylum seekers on what UNHCR can provide,” Cavalieri said. “We have to be very honest about our limitations in a country like Libya.”

When The New Humanitarian visited Zintan at the end of December, almost two weeks after it was supposed to be closed, the official process of releasing people and transferring them to Tripoli had yet to start. In the meantime, conditions had deteriorated further: Makeshift shelters had been dismantled in anticipation of the closure, and people were sleeping outside in the cold and rain.

Asylum seekers and migrants were turning to smugglers charging 400 Libyan dinars – about $100 at the black-market exchange rate – to take them to the capital. “Out of desperation, many refugees started to find their way to Tripoli,” a Somali refugee who was still in Zintan told The New Humanitarian during the visit.

The escapes were dangerous, and numerous people went missing after leaving the centre, according to a humanitarian aid worker, who asked to remain anonymous because they weren’t authorised to speak to the media.

By the time the official transfer of the final remaining detainees took place in mid-January – a month after the process was supposed to have been completed – only 121 asylum seekers and migrants were left to be released from the facility.

After escaping or being released, many former Zintan detainees ended up in densely populated areas of Tripoli where thousands of other asylum seekers and migrants – including minors – share crowded rooms in rented apartments or live in abandoned buildings.

A leaked email thread between employees of UNHCR; the UN’s migration agency, IOM; and other aid organisations working in Libya shows they had planned – but were unable to coordinate – an effective response to the humanitarian needs of former Zintan detainees.

As the release was delayed and people fled the worsening conditions at the detention centre using smugglers, the response appears to have dissolved into confusion, according to the thread, seen by The New Humanitarian.

On 20 December, four days after the closure was due to have been completed, a UN employee wrote that they had received information from another organisation “about several detainees escaping from the Zintan [detention centre] to reach Tripoli and try to get registered with UNHCR.”

“One of their [key informants] reported that 10 detainees who attempted to escape were captured last night and prolonged gunshots were heard,” the employee continued, asking: “Would you have any information on this?”

MSF, as well as several asylum seekers who spoke to The New Humanitarian, said UNHCR asked the detainees who remained in Zintan to sign a form before they were released stating that the UN refugee agency would not provide them with shelter or cash assistance, which an internal email said the agency was unable to do because of “cash liquidity problems”.

After the official release in mid-January, MSF said it received calls from several former detainees who were disoriented and confused after spending years in detention only to be dropped off in front of UNHCR’s office in Tripoli by transport organised by UNHCR and the DCIM. The former detainees said all they were given was an asylum certificate, pocket change to pay for transportation in the city, and promises they would soon get a food parcel, which few actually received.

If viruses play a bigger factor in asthma attacks, it’s likely doctors may have been fixing wrong problems