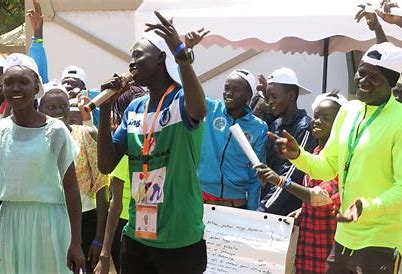 Civil society leaders, religious leaders and the international community are becoming exasperated at the listless peace deal and the increase in violence in South Sudan.

“These [peace] agreements have been deliberately undermined, and the way they’re being implemented – particularly the current one – [is] not taking the country anywhere and is just setting [it] up for more crisis and suffering,” said Rajab Mohandis, a founding member of the People’s Coalition for Civil Action (PCAA), a local umbrella group of activists.

Members of his group were detained by the government last year after calling for peaceful countrywide protests to force the government to step down over failed leadership. Mohandis and others fled the country in fear of their safety.

Patience for the government is also waning from supporters abroad. In December, a group of American and British church leaders wrote an open letter to President Kiir, saying the government was leading the country to “tyranny”.

“We are extremely distressed about the ways in which your government is taking a wrong road, a road that is taking South Sudan in a different direction from that of democracy,” they said in the letter.

But while everyone has a lot to say about the peace deal’s failings, few alternatives or attempts at solutions are being articulated.

“[The peace deal] is very messy and very ugly and very frustrating… The question we have to ask is, if not the peace deal, then what? Reopen negotiations over a way forward? What does that look like?” said one Western diplomat in Juba who did not want to be named.

According to the 2018 power-sharing agreement, the transitional government – which officially ends next February – culminates in elections in December this year. Yet this is unlikely to happen on time, and there is concern that if elections did take place things could get worse.

“Until now, the country [has] no conducive environment for casting electoral votes,” said Edmund Yakani, executive director for the Community Empowerment for Progress Organization, a local advocacy group. “Without genuine transitional security arrangements… the chances of returning to war are high.”

The main parties still haven’t agreed whether to hold elections. The ruling party says it wants to cast ballots next year, although it hasn’t specified a date; while the opposition says certain conditions must first be met, such as the return of some two million refugees, the creation of a permanent constitution – as opposed to the transitional one currently in place – and security arrangements.

Despite the lack of consensus, the ruling party has already started campaigning. Rallies have been held in six of 10 states, according to local media reports from May, which rights groups say is stoking tensions.

In March, the UN Security Council renewed the peacekeeping mission’s mandate for South Sudan with the “significant” addition of providing support for holding elections. The head of the mission, Nicholas Haysom, encouraged all parties to put momentum towards completing the agreement’s remaining benchmarks.

Even if both parties agree to hold elections, it has been years since any resources have been put towards the bodies that would organise them. According to professor Abednego Akok, chairman of the National Election Commission, they would need 10 times as many staff as it has now and at least $95 million – the budget estimated for the 2015 elections, which never took place because war erupted.

The government owes more than $500,000 in rent – three years’ worth – just for the building housing their offices, Akok added.

The UN says it will assist with technical and logistical support. However, neither they nor other countries have committed money to the process. Haysom warned that the window for completing the implementation of the peace deal is closing, and if elections occurred where the conditions were not appropriate, it “would likely lead to violence before, during, and after”.

One of the most concerning parts about these elections is that they are being seen as an endgame rather than one step towards a broader political solution, according to aid workers familiar with the process and who agreed to speak on the condition of anonymity. One of the main problems is that there is no trust between political parties, or between the people and the government, making it hard to agree on a legal framework for holding them, they say.

Some locals say elections should not be held at all. “If there’s conflict now, how can elections be held?” said Alison Simon, a youth leader from Western Equatoria, where fighting raged last year. “If there is not total peace in place, how can people contest?”

In March, the PCAA, the umbrella activist group, wrote a letter to the Intergovernmental Authority on Development, the east African regional bloc, proposing the creation of an Interim Public Trust Administration which would replace the current regime at the end of the transition in February 2023. The idea is that it would be led by people not politically aligned with the warring parties, according to the letter seen by The New Humanitarian.

Elections would then be held in December 2025, giving the country time to hold further political dialogue, rebuild public trust in the government, conduct a census, and return refugees and displaced people to their homes.

“The whole country is up in flames,” reads the letter. “Violence is spreading uncontrollably and with it is death, displacements, hunger, [disease], and misery. Where is the peace?”