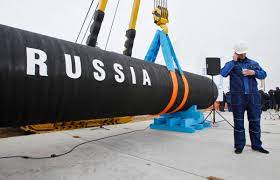 Vladimir Putin’s aggression in Ukraine triggers a search for other natural-gas supplies, but it could take years for Berlin to wean itself off Russian imports.

After three decades of successive governments tying their country’s energy market to supplies from Russia, Berlin is now urgently reconsidering in a shift that could inflict high costs on its economy.

“The situation has fundamentally changed,” German Chancellor Olaf Scholz said Tuesday, as he announced that the pipeline valued at €10 billion – equivalent to roughly $11 billion – would be put on hold after the advance of Russian troops into the breakaway regions of Ukraine.

Well over half of Germany’s natural-gas imports come from Russia – a higher proportion than most of its large European neighbours. This partly reflects Germany’s high dependence on gas in its energy mix, after the country phased out nuclear energy and is now exiting coal-generated power under a plan to shift entirely to renewable sources by 2045.

During this transition Germany plans to build several gas power plants, which generate much less climate-warming carbon dioxide than the coal plants it has been relying on as a replacement for nuclear energy.

Germany had come under increased pressure to scrap Nord Stream 2 in recent months. And while the decision is technically temporary, few politicians in Berlin expect the project to be revived soon, especially after US President Joe Biden announced he would impose sanctions on the pipeline.

One alternative is liquefied natural gas. While three German coastal cities have had plans to build dedicated LNG sea terminals to handle deliveries of LNG, none of these has come to fruition. This month, however, Economics Minister Robert Habeck said the government would support at least two new terminals.

“We need a higher independence from a single supplier, so we will diversify gas purchases and we will have to create our own infrastructure for it,” Mr Habeck told parliament.

EU officials have been trying to broker deals with gas producers across the world, including the US, to loosen Russia’s stranglehold on supplies, said Kadri Simson, the bloc’s energy commissioner. But weaning Germany and Europe off Russian gas will take time, and it won’t be cheap.

“We are preparing for all scenarios, be it a partial or full disruption of gas flows from Russia,” said Ms Simson, who recently met LNG producers in the US, Qatar and Azerbaijan. LNG deliveries to Europe have hit record levels, she added.

The two planned LNG terminals Mr Habeck mentioned as candidates for state support, in Brunsbüttel and Stade on the North Sea coast, would take about five years to build and face high regulatory hurdles.

As Russia ordered troops to two breakaway regions in Ukraine, Germany halted the certification of the Nord Stream 2 pipeline. Uncertainty over the project, which would allow Russia to bypass Ukraine to export natural gas to Europe, is affecting prices.

The terminals could be required to be able to process hydrogen produced with renewable electricity, a green gas that is likely to be used widely in the future, which is certain to push construction costs up significantly, said Oliver Grundmann, a legislator representing the Stade region.

Another problem is that LNG has historically been more expensive than pipeline gas, which Germany has traditionally been getting cheaper than most. Dmitry Medvedev, the former Russian president turned senior security official, warned in a tweet on Tuesday that shelving Nord Stream 2 would mean much higher prices for European consumers.

Hints of the danger of relying on Russia for energy first emerged when state producer Gazprom PJSC throttled gas supplies to Ukraine in 2006 and 2009.

Western European and Russian leaders at a Lubmin ceremony in 2011 to mark the launch of Nord Stream, the first direct natural-gas pipeline linking Russia and Germany.

Less than three years later, western European and Russian dignitaries gathered in Lubmin, a small town on Germany’s north-eastern shore, to celebrate the launch of Nord Stream, the first direct gas pipeline between Russia and Germany.

German Chancellor Angela Merkel huddled with her French, Dutch and Russian counterparts around a mock gas valve to symbolically switch on the link. Ms Merkel praised Russia as an “outstanding partner for Europe’s energy supply.”

“We have a bright future ahead of us,” responded Mr Medvedev, who had become president of Russia after swapping his prime minister’s role with Mr Putin.

Since then, Russia’s share of Europe’s gas market has grown from 30 per cent to 38 per cent. Russia is the EU’s biggest supplier of coal and crude oil, too. Poland’s former foreign and defence minister, Radek Sikorski, had warned about the project, saying its real aim was to allow Moscow to throttle supplies to Kyiv without hurting downstream customers.

“I raised this at all levels of government with the Germans, both in private and in public and they understood the argument, but they didn’t care,” Mr Sikorski said. “It’s just business, they said.”

Ms Merkel would go on to increase Germany’s reliance on gas. In 2011, after a tsunami caused a meltdown at the Fukushima Daiichi nuclear-power plant in Japan, she decided to accelerate a 30-year plan to phase out nuclear power in the country by a decade.

Russia’s ambassador to Berlin, Vladimir Grinin, was holding a lunch for German dignitaries after the decision was made. He raised a toast to what he said would be a new chapter in the Russo-German relationship, according to people present.

All but three of Germany’s nuclear reactors have since been shut down, and the remaining plants are set to close by the end of this year.

Yet only months later, Germany’s BASF SE, a chemicals company, traded its German gas sales and storage businesses for co-ownership of some of Gazprom’s Siberian gas fields. This left Gazprom holding roughly one-quarter of Germany’s storages, including the European Union’s largest.

Gazprom left its German, Austrian and Dutch storages largely empty last year, exacerbating the current price surge. Germany’s gas reserves have now dropped to a historic low of about 30 per cent. In comparison, storages in Poland, which has a strategic gas reserve, are nearly 60 per cent full.

Gazprom denied claims by the International Energy Agency, Kyiv and EU officials that leaving the storages empty was designed to goose energy prices in Europe.

It was a wake-up call for the EU, officials say. The bloc is now drafting rules to force operators to keep reserves at a certain level. And Germany is working on a law that would prevent Gazprom and others from keeping storages empty into next year.

Should Russian exports stop altogether as the conflict worsens, the EU might not secure enough alternatives even in the next couple of years, said James Huckstepp, a gas analyst with S&P Global Platts, an agency specialising in energy and commodities markets.

LNG-producing capacities are being expanded in countries such as the US and Qatar, but it would take at least two years for greater volumes to come to market – and even then Europe will be in fierce competition with Asian nations such as China.

Without Russian gas, Germany and others might be forced to restart mothballed coal and oil power plants and ration gas for industrial use as they give priority to power generation and heating.

“It is the worst-case scenario for Europe…it will push up already-high energy prices and boost inflation,” said Simone Tagliapietra, energy expert with the Bruegel think tank.