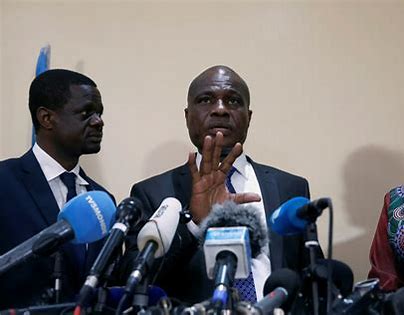 Opposition groups in the DR Congo are calling for the government to cut diplomatic ties with Rwanda. Leader of the Engagement for Citizenship and Development party in DRC Martin Madidi Fayulu, says root causes and funders of rebel groups must be addressed adequately.

To address the long-standing tensions between neighbours Rwanda and Democratic Republic of Congo (DRC), he said, leaders in the region should correct historical differences first.

Fayulu, a DRC presidential candidate in the 2018 election, made the remarks in an interview with News24 in the aftermaths of demonstrations against Rwanda’s alleged involvement in the Congo conflict. Fayulu who controversially lost the presidential poll in 2018, said the root origins of rebel groups should be understood and what they stood for today.

“Four countries – Uganda, Rwanda, Burundi and the DRC – are parties to it because of their internal problems. The first three countries’ issues have a direct effect on the DRC conflict, yet they have not been held accountable for their actions,” he added.

Hundreds of people took to the streets in two cities in the Democratic Republic of Congo on Wednesday last week, to protest neighbouring Rwanda’s alleged meddling in the country’s affairs.

“The AU and UN are very much interested in what’s happening in DRC and the region but they are not doing enough to address this conflict that has seen thousands displaced internally. It’s one of the biggest humanitarian crises in the world.”

He said failure to contain insurgency was because of the state’s own shortcomings, such as consolidating authority in the east where fighting was underway. With the state not in control, the insurgency then has ripple effects felt by neighbouring countries.

As such, Rwanda has accused the DRC of funding and working with the FDLR and most recently, the kidnapping of two Rwandan soldiers two weeks ago. On the other hand, the DRC accuses Rwanda of funding the M23 rebels who are destabilising the north-eastern parts of the country.

On Sunday, during a state visit to the Republic of Congo [Congo-Brazzaville], DRC President Felix Tshisekedi complained to his counterpart, Denis Sassou Nguesso, that Rwanda supported the M23 rebels.

“Today, it’s clear, there is no doubt. Rwanda has supported the M23 to come and attack the DRC,” said Tshisekedi.

He added, “That [desire for peace] does not constitute an opportunity for neighbours to come and provoke us. I hope that Rwanda has learned this lesson.”

On his part, Nguesso urged President Paul Kagame of Rwanda and Tshisekedi to find common ground for the sake of regional stability.