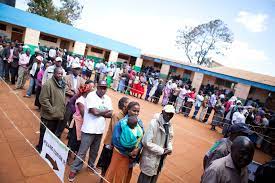 Last year, Kenya’s Independent Electoral and Boundaries Commission (IEBC), the country’s elections management body, set a target to register six million new voters for this August’s upcoming general election. With 2019 census data indicating that nearly five million young Kenyans had reached voting age since the 2017 elections, that goal seemed attainable. But as the voter registration drive came to an end in February, the commission announced that it had only managed to register 2.5 million new voters.

Currently, only eight million registered voters – about a third of the total 22 million – are aged 18-35, reflecting an increasing level of apathy about governance and elections among young, potential voters.

Sheila Mwiti, in her mid-20s, is one potential young voter but does not plan to cast her vote in the August elections. “I consider myself politically engaged but this election is too dysfunctional for my vote to be meaningful,” the Nairobi-based podcast editor told Al Jazeera.

Kenya has a high internet penetration rate of 87 per cent so its young demographic is highly exposed to political content online, but increasingly too, to outright disinformation and inflammatory rhetoric on social media.

A new report by researcher Odanga Madung of the Mozilla Foundation shows that TikTok, in particular, is a worrying wildcard in this year’s election, with the platform acting as a forum for fast and far-spreading political disinformation.

After reviewing 130 videos from 33 accounts that had been cumulatively watched four million times, the research revealed a moderation ecosystem lacking the context and resources to adequately tackle election disinformation in Kenya.

This has had a disproportionate effect on young audiences, as TikTok users in Kenya are typically aged 14-25. The platform is already the most downloaded app in the country, surpassing even the ubiquitous WhatsApp and Facebook.

Young audiences increasingly not engaging with the formal political process but simultaneously being exposed to incendiary political content on their beloved platform is a signal of trouble ahead, experts say.

“First, this content is not just on TikTok alone,” Madung told Al Jazeera. “For a long time before the alarm bells were rung, this content was everywhere on the big social media platforms. The problem with TikTok, in particular, is that it supercharges virality – you don’t need to build an audience of followers to go viral.”