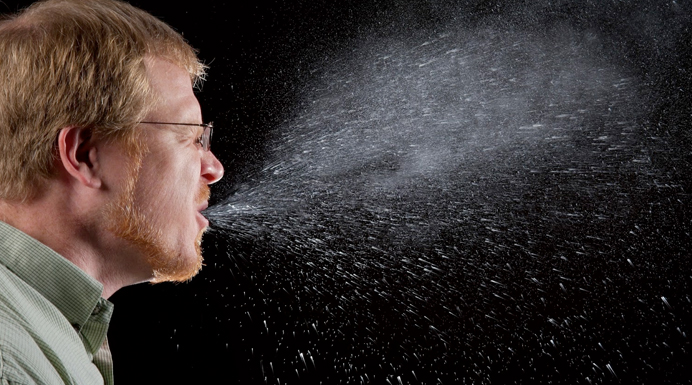 In the past, graduate student Katie Randall would have acquired the book, In Before Times, through interlibrary loan. With the pandemic shutting down universities, that was no longer an option. On the wilds of the open internet, Randall tracked down a first edition from a rare book seller for $500 – a hefty expense for a side project with essentially no funding.

Randall had studied citation tracking, a type of scholastic detective work where the clues aren’t blood sprays and stray fibres but buried references to long-ago studies, reports and other records. But then one of the university’s librarians came through and located a digital copy in Michigan. Randall began to dig in.

In the words of William Firth Wells’ manuscript, she found a man at the end of his career, rushing to contextualise more than 23 years of research. She started reading his early work, including one of the studies Jose-Luis Jimenez had mentioned. Jimenez was an atmospheric chemist at the University of Colorado Boulder and was collaborating with Marr in five-micron airborne disease transmission.

Wells was a Harvard engineer who had published research papers in 1955 titled Airborne Contagion and Air Hygiene.

In 1934, Wells and his wife, Mildred Weeks Wells, a physician, analysed air samples and plotted a curve showing how the opposing forces of gravity and evaporation acted on respiratory particles. The couple’s calculations made it possible to predict the time it would take a particle of a given size to travel from someone’s mouth to the ground.

According to them, particles bigger than 100 microns sank within seconds. Smaller particles stayed in the air. Randall paused at the curve they had drawn. To her, it seemed to foreshadow the idea of a droplet-aerosol dichotomy, but one that should have pivoted around 100 microns, not five.

The book was long, more than 400 pages, and Randall was still on the hook for her dissertation. She was also helping her restless six-year-old daughter navigate remote kindergarten, now that Covid had closed her school.

So, it was often not until late at night, after everyone had gone to bed, that she could return to it, taking detailed notes about each day’s progress.

One night she read about experiments Wells did in the 1940s in which he installed air-disinfecting ultraviolet lights inside schools. In the classrooms with UV lamps installed, fewer kids came down with the measles. He concluded that the measles virus must have been in the air.

Randall was struck by this. She knew that measles didn’t get recognised as an airborne disease until decades later. What had happened?

Part of medical rhetoric is understanding why certain ideas take hold and others don’t. So as spring turned to summer, Randall started to investigate how Wells’ contemporaries perceived him. That’s how she found the writings of Alexander Langmuir, the influential chief epidemiologist of the newly established Centre for Diseases Control (CDC).

Like his peers, Langmuir had been brought up in the Gospel of Personal Cleanliness, an obsession that made handwashing the bedrock of US public health policy. He seemed to view Wells’ ideas about airborne transmission as retrograde, seeing in them a slide back toward an ancient, irrational terror of bad air – the “miasma theory” that had prevailed for centuries. Langmuir dismissed them as little more than “interesting theoretical points.”

But at the same time, Langmuir was growing increasingly preoccupied by the threat of biological warfare. He worried about enemies carpeting US cities in airborne pathogens. In March 1951, just months after the start of the Korean War, Langmuir published a report in which he simultaneously disparaged Wells’ belief in airborne infection and credited his work as being foundational to understanding the physics of airborne infection.

In the report, Langmuir cited a few studies from the 1940s looking at the health hazards of working in mines and factories, which showed the mucus of the nose and throat to be exceptionally good at filtering out particles bigger than five microns. The smaller ones, however, could slip deep into the lungs and cause irreversible damage.

If someone wanted to turn a rare and nasty pathogen into a potent agent of mass infection, Langmuir wrote, the thing to do would be to formulate it into a liquid that could be aerosolized into particles smaller than five microns, small enough to bypass the body’s main defences. Curious indeed. Randall made a note.

When she returned to Wells’ book a few days later, she noticed he too had written about those industrial hygiene studies. They had inspired Wells to investigate what role particle size played in the likelihood of natural respiratory infections. He designed a study using tuberculosis-causing bacteria.

The bug was hardy and could be aerosolised and if it landed in the lungs, it grew into a small lesion. He exposed rabbits to similar doses of the bacteria, pumped into their chambers either as a fine (smaller than five microns) or coarse (bigger than five microns) mist.

The animals that got the fine treatment fell ill, and upon autopsy it was clear their lungs bulged with lesions. The bunnies that received the coarse blast appeared no worse for the wear.

For days, Randall worked like this – going back and forth between Wells and Langmuir, moving forward and backward in time. As she got into Langmuir’s later writings, she observed a shift in his tone. In articles he wrote up until the 1980s, toward the end of his career, he admitted he had been wrong about airborne infection. It was possible.

A big part of what changed Langmuir’s mind was one of Wells’ final studies. Working at a VA hospital in Baltimore, Wells and his collaborators had pumped exhaust air from a tuberculosis ward into the cages of about 150 guinea pigs on the building’s top floor. Month after month, a few guinea pigs came down with tuberculosis. Still, public health authorities were sceptical. They complained that the experiment lacked controls. So Wells’ team added another 150 animals, but this time they included UV lights to kill any germs in the air.

Those guinea pigs stayed healthy. That was it, the first incontrovertible evidence that a human disease – tuberculosis – could be airborne, and not even the public health big hats could ignore it.

The ground-breaking results were published in 1962. Wells died in September of the following year. A month later, Langmuir mentioned the late engineer in a speech to public health workers. It was Wells, he said, that they had to thank for illuminating their inadequate response to a growing epidemic of tuberculosis. He emphasised that the problematic particles – the ones they had to worry about – were smaller than five microns.

Inside Randall’s head, something snapped into place. She shot forward in time, to that first tuberculosis guidance document where she had started her investigation. She had learned from it that tuberculosis is a curious critter; it can only invade a subset of human cells in the deepest reaches of the lungs.

Most bugs are more promiscuous. They can embed in particles of any size and infect cells all along the respiratory tract.

What must have happened, she thought, was that after Wells died, scientists inside the CDC conflated his observations. They plucked the size of the particle that transmits tuberculosis out of context, making five microns stand in for a general definition of airborne spread.

Wells’ 100-micron threshold got left behind. “You can see that the idea of what is respirable, what stays airborne and what is infectious are all being flattened into this five-micron phenomenon,” Randall says. Over time, through blind repetition, the error sank deeper into the medical canon. The CDC did not respond to multiple requests for comment.

In June, she Zoomed into a meeting with the rest of the team to share what she had found. Linsey Marr almost couldn’t believe someone had cracked it. “It was like, ‘Oh my gosh, this is where the five microns came from?!’” After all these years, she finally had an answer.

Marr is an aerosol scientist at Virginia Tech and one of the few in the world who also studies infectious diseases.

But getting to the bottom of the five-micron myth was only the first step. Dislodging it from decades of public health doctrine would mean convincing two of the world’s most powerful health authorities not only that they were wrong but that the error was incredibly – and urgently – consequential.