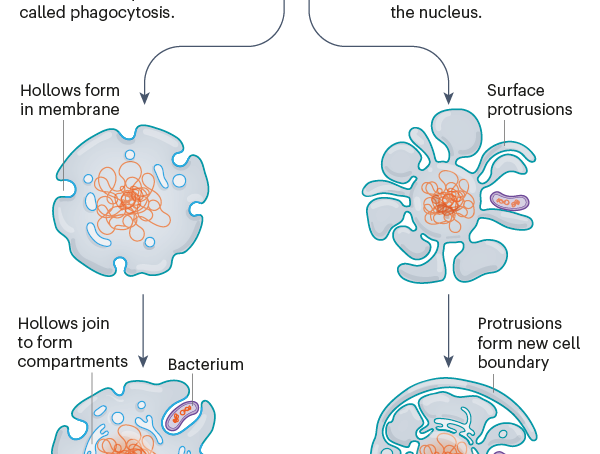 Evolutionary biologist David Baum was thrilled to flick through a preprint in August 2019 and come face-to-face – well, face-to-cell – with a distant cousin. Baum, who works at the University of Wisconsin–Madison, was looking at an archaeon: a type of microorganism best known for living in extreme environments, such as deep-ocean vents and acid lakes.

Archaea can look similar to bacteria, but have about as much in common with them as they do with a banana. The one in the bioRxiv preprint had tentacle-like projections, making the cells look like meatballs with some strands of spaghetti attached. Baum had spent a lot of time imagining what humans’ far-flung ancestors might look like and this microbe was a perfect doppelgänger.

Archaea are more than just oddball lifeforms that thrive in unusual places – they turn out to be quite widespread. Moreover, they might hold the key to understanding how complex life evolved on Earth. Many scientists suspect that an ancient archaeon gave rise to the group of organisms known as eukaryotes, which include amoebae, mushrooms, plants and people – although itis also possible that both eukaryotes and archaea arose from some more distant common ancestor.

Eukaryotic cells are palatial structures with complex internal features, including a nucleus to house genetic material and separate compartments to generate energy and build proteins. A popular theory about their evolution suggests that they descended from an archaeon that, somewhere along the way, merged with another microbe.

But researchers have had trouble exploring this idea, in part because archaea can be hard to grow and study in the laboratory. The microbes have received so little attention that even the basics of their lifestyle – how they develop and divide, for example – remain largely mysterious.

Now, researchers could be closer than ever before to plausible evolutionary answers. Thanks to a surge in interest in these oft-overlooked microbes and the ongoing invention of methods for tending to archaea in the lab, cell biologists are seeing them in more detail than was previously possible.

Publications on this enigmatic group of microbes have nearly doubled over the past decade and the nascent study of their biology is immensely exciting, says molecular microbiologist Iain Duggin at the University of Technology Sydney in Australia.

“We can do some interesting fundamental experiments, and make some major first-step discoveries,” he says. “We may be able to get a much clearer view of how the earliest eukaryotes evolved.”

The images that wowed Baum, later published in Nature, offered such a view. They were the result of 12 years’ painstaking culture of an archaeon thought to be closely related to the one that spawned the eukaryotes. Microbiologists worldwide were thrilled by the portraits, but for Baum, they were a pet theory brought to life.

Five years earlier, he and his cousin, cell biologist Buzz Baum at the Medical Research Council (MRC) Laboratory of Molecular Biology (LMB) in Cambridge, UK, had published a hypothesis about the origin of eukaryotes. They predicted that the grandmother of them all might have sprouted protrusions, much like those on the archaeon in the paper. They reasoned that these protrusions came to surround nearby bacteria, which then transformed into a defining feature of eukaryotic cells: the lozenge-shaped energy-makers known as mitochondria. As David Baum stared at the spaghetti-like strands, he recalls thinking, “Oh my goodness, we were right.”

If a eukaryote is really a souped-up archaeon, then scientists must understand archaea to work out how the more-complex cells came to be. Whereas scientists studying eukaryotes and bacteria have been drilling down into processes such as cell division and growth for decades, the inner workings of archaea are still largely obscure.

“Archaea, every time, do things differently,” says Sonja Albers, a molecular microbiologist at the University of Freiburg in Germany. For example, related proteins might take on different jobs in different organisms. That makes archaea fascinating to study, says Duggin, but it’s also important, because researchers can then compare across groups, looking for clues to the origin of the nucleus and other major innovations.

From the soils to the seas, one thing all cells have in common is that they split to make more of themselves. It happened in the common ancestor of all cell-based life on Earth, but the process started to look different as organisms adapted to their niches.

Researchers can explore evolution by looking at this divergence. Any mechanisms that all cellular life forms have in common point to biology inherited from the very earliest cells. By contrast, systems shared between only archaea and eukaryotes, or only bacteria and eukaryotes, hint at which parent provided the various ingredients of eukaryote biology. For example, the flexible membrane that separates eukaryotic cells from the outside environment resembles that in bacteria.

Duggin studies cell division in the archaeon Haloferax volcanii. It’s a lover of salty conditions, such as those in the Dead Sea, and not of volcanoes, as the species moniker suggests. (It was named after microbiologist Benjamin Elazari Volcani.) For an extremophile, H. volcanii is pretty simple to grow in a salty broth, and its large, flat cells are easy to see dividing under the microscope.

Despite the enormous differences between bacteria, eukaryotes and archaea, the groups do share a couple of cell-division systems. In bacteria, a protein called FtsZ forms a ring at the future site of cell division. Duggin and his collaborators have observed the same in H. volcanii. FtsZ, then, seems to have roots at the very base of the evolutionary tree.

Archaea have helped to surface other ancient proteins, too. One is SepF, a protein that Albers’s group has found is essential to H. volcanii division. Together with FtsZ, it could be part of a primordial “minimal system” for cell division, according to Nika Pende, an evolutionary biologist at the Pasteur Institute in Paris. Pende has analysed the distribution of the genes encoding FtsZ and SepF across a variety of microbes and traced them all the way back to the last universal common ancestor of all living cells.

Yet, at some point in evolution, some archaea assigned the cell-division job to a different set of proteins. This is where Buzz Baum’s latest work comes in. His group has been studying the archaeon Sulfolobus acidocaldarius. In this case, the name fits: it loves acid and heat. Lab members wear gardening gloves to protect themselves from the acidic liquid it lives in, and built a special chamber so they could watch it divide under the microscope without cool spots or evaporation.