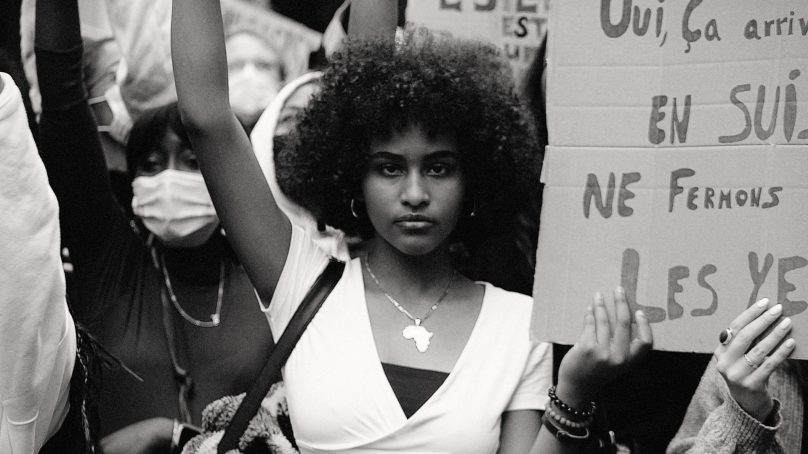 The protests following the killing of George Floyd, an unarmed Black man, by police a year ago built on those that came before – in response to the deaths of Michael Brown, Eric Garner, Tamir Rice, Sandra Bland and far too many others.

The global reckoning was a result of decades of work by advocates who prepared the public to engage with race and racism. One reason their message had taken so long to become mainstream lies in how the press typically covers protests.

I study media representation, marginalised communities and social movements. I have quantified narratives in news coverage of Black civil rights since the 2012 killing of Trayvon Martin, comparing it with coverage of protests for and against former US president Donald Trump, women’s rights, gun control, environmental protection and more.

My colleagues and I use computational methods to find linguistic patterns, rhetoric and sentiment in texts, together with human coding for overarching themes including ‘violence’, ‘combativeness’ and ‘racial justice’, as well as for contextual cues, such as the passive voice in headlines, for example “peaceful protesters teargassed”, which neglect to say who took the action.

Linguistic analysis can show what narratives are being presented to and adopted by the public. Such work – examining which groups are privileged at the expense of others – can help many enterprises, including the scientific system, to repair damage from stigmatizing narratives.

Civil-rights protesters are the least likely to have their concerns and demands presented substantively. Less space is given to protesters’ quotes; more space to official sources. Although my work captures amazing individual pieces of journalism that explore themes such as civil rights, protesters’ motivations and communities’ grief, the dominant narrative accentuates trivial, disruptive and combative actions. My early analyses hint that practices improved during the wake-up call that was 2020, but not by much.

In 2017, more than half the coverage of immigration, health and science demonstrations included protesters’ grievances. Less than one-quarter of Black civil-rights protest coverage did so. After a police officer shot Michael Brown in 2014 in Missouri, one-third of articles emphasised disruption and confrontation.

Fewer than 10 per cent described protesters’ demands for reform and then did so shallowly. Our sample found broad consistency across the St Louis Post-Dispatch and top newspapers such as The New York Times, The Wall Street Journal, USA Today and The Washington Post. The pattern persists over national and local papers and broadcast coverage, as well as around the world.

Activists’ work here in Minneapolis, where Floyd died, extends well before and after the events of May 2020, and is often done by people carrying the trauma of their own losses. Many are veterans of demonstrations that followed the deaths of dozens of Black people, including those of two other young Minnesotan men, Philando Castile and Jamar Clark. What I learnt from being on the ground is just how much mainstream media does not cover. Namely, how organised, civil, inspiring and restorative many protest efforts are – from setting up food drives to holding public vigils.

In our preliminary analysis of cable news and Associated Press coverage from May to December 2020, there’s a small rise (12 per cent of coverage) in mentions of police violence during protests from years past. Otherwise, there is little change.

Headlines such as “Police violence is just the tip of the issue”, and “Lawmakers use protest momentum to push state racial reforms”, made up only about 69 of 690 articles. Headlines focusing on protester violence and disruption were about four times more common.

There were days when some protesters were violent or used radical tactics, but there were solid weeks of peaceful demonstrations. Descriptions of the latter appear in only 4.9 per cent of articles.

Consistently under-represented from the eight years’ worth of coverage my team has worked on – from newspapers, websites and TV – are discussions about how racism intersects with other issues. For example, the connection between police shooting Black people and gun violence is rarely made. Stories about police violence against Black and trans-women are often pushed to the margins.

Before 2020, journalists’ reaction to my research was usually indifference. As newsrooms around the country made efforts to reckon with their racist pasts, they were more willing to engage in initiatives, training courses and workshops. This shift makes reanalysis essential.

My collaborators and I hope to expand our methods to develop more context-specific computer-learning techniques that might be able to detect the nuances in language, such as political dog whistles and coded wording, that especially marginalise Black communities and activist efforts. This would allow us to process information more quickly, perhaps in real time and to draw broader conclusions.

We also hope to broaden analysis of other information sources, including new anti-racism-oriented publications such as The Emancipator or social-media conversations. We want to understand the tensions between narratives from mainstream media and from ‘citizen journalism’ produced by activists and advocates.

Journalists can and do critique individual articles, but their newsrooms often lack the resources to analyse their work as a corpus. Researchers can help them to improve, and hold them to account.

Next Covid wave: Deadlier pandemic attack will come from its effect on job market