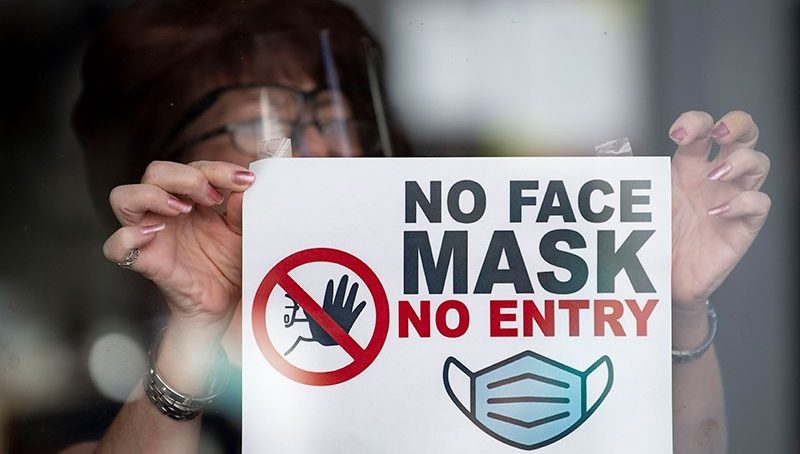 A sign is still posted on the front door of the Wolfeboro Food Co-op that reads, “Face masks required.” Until recently, another sign had hung directly below it, explaining how the New Hampshire market was following federal policy.

Erin Perkins, manager of the shop, removed that second sign on 14 May – the day after the US Centers for Disease Control and Prevention (CDC) announced that fully vaccinated individuals, in most situations, no longer need to wear a mask. “We weren’t expecting that,” says Perkins. “It puts us in a precarious position. We were not about to start asking people if they are vaccinated or not.”

New Hampshire was the last state in New England to start mandating mask wearing in public to reduce the spread of the coronavirus SARS-CoV-2. And on 16 April, it became the first in the region to lift that mandate, joining several other states around the country that were loosening their pandemic-related restrictions.

Cities and businesses in New Hampshire could still set their own policies and Perkins wasn’t comfortable changing things right away. Even after the CDC announced its latest guidelines – just two weeks after communicating that vaccinated people should continue to mask up indoors – Perkins wasn’t personally comfortable with unmasked people in her shop.

She also knows that several customers have immune systems that are compromised, and emerging research suggests that people in this group are still at risk even after vaccination.

“Until we feel better about the state of things – until the numbers make a little bit more sense to us, we have decided to wait,” she says, even if that means dealing with testy customers.

Anne Hoen, an epidemiologist at Dartmouth College in nearby Hanover, can understand Perkins’s caution. She says that both the state and federal moves were probably a little too early. Hoen works in New Hampshire but lives just across the border in Vermont, where a state-wide indoor mask mandate remained in force until mid-May, despite Vermont having a lower rate of hospitalisations than practically anywhere else in the country.

In the wake of the CDC’s announcement, Vermont Governor Phil Scott relaxed the mandate for fully vaccinated individuals.

The evidence is clear that masks cut down on Covid-19 deaths, but nearly a year and a half into the pandemic and with vaccination coverage climbing in many places, public-health scientists and officials are still struggling to get people – particularly unvaccinated people – to wear masks at appropriate times. Average mask use across the United States has been declining since mid-February.

Meanwhile, infection rates in some places have increased. A patchwork of policies and mixed messages from both politicians and public-health officials has resulted in confusion, consternation and a mess of data to interpret. “We’re all over the map,” says Monica Gandhi, an infectious-disease physician at the University of California, San Francisco. “That’s been the problem this entire pandemic. We’ve been making it up as we go along.”

It wasn’t until late April, for example, that the US government finally distinguished between indoor and outdoor mask use in its recommendations, even though the science had been clear for months that the risk of transmission was much lower outdoors.

And now, after the CDC released its latest revision, agency director Rochelle Walensky noted that it could change its mask guidance yet again. Hoen and other epidemiologists warn that it is very difficult to reinstate a rule after it has been revoked.

Mask use will continue for this pandemic, and it’s likely to become a common response to future outbreaks. So, researchers are trying to get a handle on what the science says about how to encourage people to wear them.

As the Covid-19 pandemic enters a new phase, scientists around the world are accessing the accumulated data and asking what makes some policies more effective than others, and probing when and how they need to change.

Gandhi is among those who emphasise that mask messaging should evolve in light of rising vaccination rates. Officials should begin relaxing restrictions to give people hope and to motivate vaccination, she says. But changes need to be made carefully.

Around the same time that New Hampshire rescinded its rule, for example, Covid-19 cases in India began to surge. Strict mask mandates there had reined in the country’s first wave of infections last September. But as Covid-19 numbers came under control, fewer people wore masks and many attended large gatherings. The disease quickly gained the upper hand. The country is now scrambling to get people to vaccinate and to use masks again.

“Wearing masks should probably be one of the last things we stop doing,” says Hoen, adding that she hopes no other countries are looking to the United States for guidance.

The case for mask mandates was made relatively early in the pandemic. On April 6, 2020, the city of Jena, Germany, became one of the first communities in the world to require people to wear masks in public.

Thomas Nitzsche, the town’s mayor, says he was sleepless for two nights before the policy went into effect. “I didn’t know if the public would comply,” he says. “Luckily, they did.”

Researchers estimate that new cases in the city, home to around 110,000 people, dropped by about 75 per cent during the 20 days after the rule was brought in.

But it wasn’t as simple as flipping a switch one day and then reaping the rewards. Evidence is building that, although a mandate can be a powerful measure, effective messaging and role models are crucial for public uptake.

In the days leading up to the order in Jena, city officials launched a campaign to give the local population an idea of what was to come. Posters around the city declared “Jena zeigt Maske” (“Jena shows mask”), and Nitzsche posed for photos on a city tram wearing a mask.

Making the case for masks and making them obligatory early on, was a common-sense move for Nitzsche. Meanwhile, mask policies in most of the surrounding state of Thuringia and elsewhere in Germany lagged behind. There, officials generally adopted mandates only after case counts surged. Although there were no new Covid-19 cases in Jena five days after implementation of the mask mandate, for example, the virus continued to spread in nearby Erfurt, the state capital, and slowed only after a mask requirement was imposed, according to a preprint study4 by public-health leaders in Jena.

It was a similar story around the globe, with a few exceptions. China and other Asian nations quickly adopted mask policies that probably prevented large-scale spread of the disease. Nitzsche says he was personally inspired by the Czech Republic, which began requiring masks in certain public places in mid-March 2020.

Klaus Wälde, an economist at Johannes-Gutenberg University Mainz in Germany, says that the rest of the country should have followed Jena’s lead. But the asynchronous mask mandates across Germany — and elsewhere – provided Wälde and others with a unique opportunity.

He and his colleagues used data from 401 regions in Germany to estimate the effect of mask mandates on SARS-CoV-2 transmission. They took advantage of the regional variation to create artificial controls, and then estimated what would have happened had the intervention not been implemented. His team’s conclusion: requiring people to wear face masks decreases the daily growth rate of reported Covid-19 cases by more than 40% per cent.

The economists’ approach was “clever”, says Hoen. “This adds to the body of evidence that masks work.”

In a similar study in the United States, published this January, researchers found that a national mandate for employees to wear face masks early in the pandemic could have reduced the weekly growth rate of cases and deaths by more than 10 percentage points in late April 2020.

The study suggests that this could have reduced deaths by as much as 47 per cent (or by nearly 50,000) across the country by the end of May last year. Another preprint, published in October, linked mask mandates with a 20–22 per cent weekly reduction in Covid-19 cases in Canada.