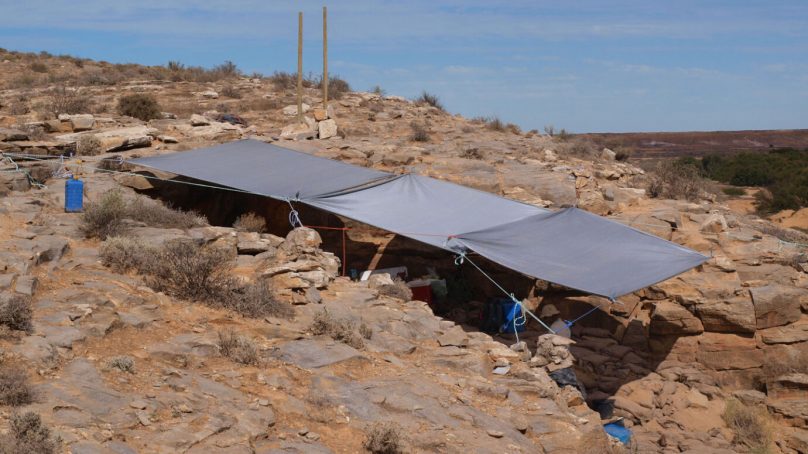 Discoveries at this site in southern Africa indicate that a small, relatively isolated human group developed cultural innovations between 92,000 and 80,000 years ago.

Southern African hunter-gatherers who inhabited an arid, inland landscape between around 92,000 and 80,000 years ago survived thanks to techniques and behaviours that they formulated on their own. Those ancient innovations owed nothing to seaside communities known to have influenced how many southern African groups made stone tools starting several thousand years later, say archaeologist Alex Mackay of the University of Wollongong in Australia and his colleagues.

And in what is now northern China, H. sapiens who reached the region by around 40,000 years ago also concocted novel tools and were the first in that region to grind up pigments for decorative or symbolic purposes, say archaeologist Fa-Gang Wang of the Hebei Provincial Institute of Cultural Relics and Archaeology in China and colleagues.

Together, the studies suggest Stone Age culture was more innovative than previously thought. Previous studies in Africa suggested that distinctive toolmaking methods at coastal sites spread across much of the southern part of the continent from at least around 72,000 years ago until roughly 59,000 years ago.

But human innovations represented by finds at a rock-shelter about 44 kilometres from southern Africa’s Atlantic coast, called Varsche Rivier 003 (or VR003), challenge a popular idea that developments in toolmaking and other cultural behaviours originated only in seaside, resource-rich locales where neighbouring human groups could have regularly shared information, according to Mackay and colleagues report published on February 28 in Nature Ecology & Evolution.

The stone tools and other artifacts found at Varsche Rivier also don’t appear at sites of comparable age situated 100 kilometres to the south. That suggests ancient H. sapiens at VR003 were no copycats, Mackay says.

“By 92,000 years ago, humans – even those likely living in low-density populations – were more than capable of generating new ideas when left to their own devices.”

That doesn’t surprise archaeologist Marlize Lombard of the University of Johannesburg. H. sapiens in southern Africa 100,000 years ago or more developed a range of hunting tools most likely tailored to different environments, including lightweight stone-tipped spears akin to iron-tipped javelins now favoured by Indigenous African hunters.

At that time, “H. sapiens populations had the necessary [mental] understanding to apply high levels of technical adaptability and creative expression wherever and whenever they needed or chose to,” says Lombard, who did not participate in either of the new studies.

One creative innovation at VR003 advanced stone-tool making. Stone Age people at the site slowly heated pieces of silcrete rock in open hearths, causing the chunks to shatter into small, angular fragments. Tiny, sharp-edged tools, most no longer than a paper clip, were struck off silcrete fragments. Finished products were probably used for a variety of cutting tasks and possibly hunting. Experiments with silcrete from sources near VR003 helped the researchers identify signature changes to the surfaces of heat-shattered rocks and damage produced when toolmakers struck thin flakes off those rocks.

Mackay’s group also unearthed 26 fragments of mollusc shells, mostly from aquatic snails called limpets. Evidence of long-distance transport of edible shellfish at the time of VR003’s occupation is rare but has been found at two other sites in arid parts of southern Africa. No evidence of interaction with coastal groups has turned up at those sites either.

Finally, 21 ostrich eggshell fragments uncovered at the site appear to have come from intact shells that were used as water vessels. Curved edges of these fragments once formed holes that were chiselled out of eggshells so that they could hold liquid, the scientists suspect.

More than a continent away, H. sapiens again got creative after reaching northern China’s Nihewan Basin around 40,000 years ago, Wang and colleagues reported in March 2 edition of Nature.

Excavations at a site called Xiamabei revealed a patch of red-stained sediment and the researchers found two pigment pieces with different mineral compositions and a pigment-stained limestone slab. The findings indicate that Xiamabei’s residents ground up coloured pigment chunks roughly 9,000 years before the earliest previous evidence of pigment use in East Asia.

Nearly 400 stone artifacts found at Xiamabei include bladelike tools, many about the size of tiny tools at VR003. Those finds stand out as novel for northern China around 40,000 years ago, the scientists say. Seven tools displayed signs of having been attached to handles and used for tasks such as hide scraping and cutting plants or animal tissue.

Although no hominid fossils have been found at Xiamabei, fossils unearthed elsewhere in northern China indicate that H. sapiens reached the area around 40,000 years ago. Denisovans and Neandertals also inhabited northern China at that time. It’s uncertain which population — or possibly a group with mixed ancestry or cultural influences – left its mark at Xiamabei.

Whatever the case, a longstanding assumption that a single set of cultural innovations carried by H. sapiens from Africa – including beads, pendants and techniques for making tiny stone blades – swept across Asia starting perhaps 35,000 years ago appears increasingly unlikely, says archaeologist and study co-author Shi-Xia Yang of the Chinese Academy of Sciences in Beijing.