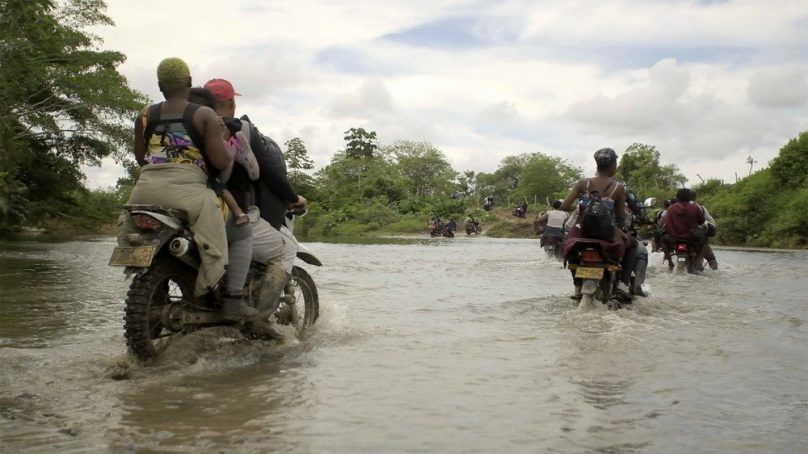 For tens of thousands of people escaping poverty, conflict, disasters and abusive gangs and regimes, the dangerous land route between Colombia and Panama known as the Darién Gap is the only way on towards Mexico and their hoped-for final destination – the United States.

Necoclí is the main waystation in northwestern Colombia before people attempt the treacherous jungle passage. Since border restrictions were lifted this year between the countries to the south that are amongst those hardest hit globally by Covid-19, the numbers of migrants entering the town have soared, as have deaths on the Panamanian side.

Some 100,000 people – mostly Haitians, Cubans, and Venezuelans, but some from as far afield as Afghanistan and Burkina Faso – have reportedly arrived in Panama from Necoclí so far this year. Colombian officials put the number of migrants passing through the town this year lower, at around 70,000, but this is still many times the typical annual figures, which are in the low thousands.

Many migrants and asylum seekers have made their way up to Necoclí from Peru, Brazil, and Ecuador due to the drain on jobs caused by the pandemic, or after giving up trying to regularise their status in countries such as Chile.

With a normal population of 72,000, the remote town’s sanitation and electricity were already lacking before the surge. Health services are now collapsing, water is scarce, and aid is in short supply. The Colombian government has called the situation a “humanitarian tragedy”.

“There are many needs here,” a regional official, who asked not to be named, told The New Humanitarian. “We can’t rely on basic services.”

An agreement between Colombia and Panama in August sought to cap the number of people allowed to cross the border at 500 per day. But ongoing political instability and insecurity in Haiti, and growing needs in Cuba, have continued to drive more people to this lawless region.

As a result – and despite the recent well-publicised deportations of hundreds of Haitians from Texas to Haiti, and the thousands more languishing near the Mexico-Guatemala border – the numbers of migrants awaiting passage onwards from Necoclí have risen from a few hundred at any one time to nearly 20,000.

Video journalist David González reports that many migrants are now encountering dangers long before they step foot in the jungle. Not only are local people – amid high unemployment – keen to cash in on the migrant goldmine by inflating prices, but reports of sexual violence and crimes involving former Colombian paramilitaries are on the rise.