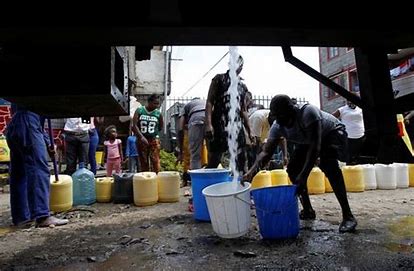 Kenya was heaven until thieves broke in, fuzzed our dreams and they are now robbing our lives

A few days ago, I met an agemate who hails from a rich family. They live in Nairobi. His retired father was a senior government official after independence. The family is wealthy even today. Stinking rich!

My friend does not understand why some Kenyans live wretched lives. The scum of society.

So, I took time to give him the rundown of Kenya and how we had functioning facilities in days gone by. I told him that while we are forced to celebrate some overpriced standard gauge railway (archaic by other standards), we indeed had the old railway that connected East Africa, let alone Kenya. Kenya was a haven and people were happy of the ever-escalating rounds of success since independence. Then, maendeleo or development rang a bell in people’s minds.

I told him of the railway from the capital Nairobi to Nanyuki in central Kenya that was used to transport beef cattle for export via Konza and Athi River holding grounds. Kenya was famous for live cattle exports, which is not easy to do.

We had a railway line from Voi to Taveta, southeast of the capital Nairobi. We had timed urban transport – the Kenya Bus Service – in the coastal town of Mombasa that also served outlining regions like Taveta. In Nairobi, Kenya Bus Service connected the city to outlying towns like Limuru, Kiambu, Thika, Machakos and Nakuru.

There were steamers on the second largest inland fresh water-mass in the world – Lake Victoria. Families in Kenya’s lakeside city of Kisumu were linked with their folks in Bukoba and Mwanza in Tanzania, and Entebbe in Uganda. They made the dream of a political federation look real.

In those days, if your cargo arrived in Kisumu from the Port of Mombasa on the Indian Ocean coast, it was loaded onto a steamer and ferried to Bukoba. Regional trade was huge and booming. Kisumu was a functioning port.

Growing up in Marsabit – close to 500km from Nairobi – I did not have a chance to see a railway. However, I knew from what I learnt at school that there was a line that connected Nyahururu and the agricultural town of Nakuru. Drawing railway connections in Kenya was part of the education syllabus then.

The East African Airways was owned by Kenya, Uganda and Tanzania before greed set in, that was exacerbated by tyrant Idi Amin Dada, who overthrew Milton Obote government in Uganda. Idi Amin oiled the breakup of the first East African Community that had until then survived the ideological tensions between Kenya’s President Jomo Kenyatta and Tanzania’s President Julius Nyerere.

We had thriving garment industries in the name of Rivatex, Kicomi, Mountex, Raymond and Taitex Mills. The meat canning factory in Kenya supplied the local and foreign markets. There were real jobs. There were no wheelbarrow pushers at the lower rung of the economy. The poor and disadvantaged were not mocked by the rich with wheelbarrows.

Almost all household goods were manufactured in Kenya. We even assembled Sanyo radios; there vehicle assemblies in then industrial town Thika and in Nairobi’s Industrial Area. As I spoke, I could tell my friend was awed. I spoke to him like a bearded grey haired 90-year-old sage would.

While I went to ordinary schools and learnt one or two things about our history, my friend attended one of those prestigious schools for the rich. Maybe they did not get an opportunity to learn these things in class. I have no idea. From his cravings, I suspect they only learnt “how to make money”. They had little time for “how to earn money”. They only make money. Period! Earning is for the poor and lowly.

The health system worked. Hospitals were fully equipped and drugs were imported from Germany, Italy, England, etc, were prescribed. More was manufactured locally. There were no fakes. The useless private clinics that have sprang up all over were unheard of. Humanity was real and made sense.

Most hospitals and health centres were run by qualified doctors paid by the government. The mushrooming of private clinics is a testimony of broken-down health system. It is a recent phenomenon. It has been sold to us as development. Truth be told, the purveyors of these lies are vultures feasting on our miseries.

Government schools were equipped. I used the same books at Marsabit Primary school just like a child at Moi Avenue Primary School in Nairobi. We had no private schools in the form of academies, save for community schools like Oshwal and Aga Khan. I repeat, the proliferation of private schools is a sign of a broken-down system.

Fix government-owned schools and the so-called academies will shut down.

In the late 1980s, 90 per cent of Nairobi residents had piped water. We had our fill straight from the tap. The government of the day promised us that by year 2000 every home would have piped water. One of those pipe dreams. Reason? Nairobi is currently getting water from vendors. Water bowser and handcart owners do brisk business of retailing contaminated water from 2019. A spike in waterborne diseases is always inevitable.

I can go on and on. We may have been poor in the first three decades of independence, but we led a dignified life. Basic needs such as healthcare, shelter, food, education and water were available and guaranteed.

I have shared this to educate and encourage the younger generation that Kenya had better days – in the past. The golden era began to recede when thieves came to power. They have stolen everything, including hopes and dreams. They are stealing our lives now.

I still remain optimistic that we can get our groove back, but maybe not in my lifetime. I will do what I can in my small way to make it happen. Kenya’s better days lie ahead, once we deal with the thieves.

How Covid-enforced lockdowns have improved air quality in big towns

Covid nationalism: Regions where cases soar are the places where next variant will emerge