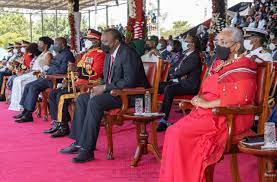 Kenya President Uhuru Kenyatta continued his onslaught on the judiciary during the country’s 58th Independence Day celebrations, terming the latter arm of government an impediment to economic development and national cohesion.

President Kenyatta just fell short of accusing the judiciary of being the instigator of cycles of election violence, inter-ethnic intolerance and runaway corruption that are synonymous with successive administrations since independence.

The celebrations, marked for the first time in Kenya’s third largest city on the shores of Lake Victoria – roughly 350 kilometres west of the capital Nairobi – are billed as critical in cementing the cordiality with his rival in the 2013 and 2017 presidential elections Raila Odinga, in which President Kenyatta was controversially declared winner by the Independent Electoral and Boundaries Commission.

Since the Supreme Court annulled his election for the second term in 2017 and ordered a re-run, President Kenyatta has seized every opportunity to berate the judiciary and cast aspersions on the competence and integrity of the Bench.

The president’s obvious push to enervate the judiciary sets the stage for unending tussle over constitutional separation of powers of the three arms of government, since Parliament is considered by the public as a footnote of the executive, therefore ineffective in prosecuting and defending public interest.

On Tuesday, he revisited this pet topic on June 1 Madaraka (Independence) Day speech in what sounded like a terse warning to the judiciary that in will not stonewall the proposed constitutional amendments.

“We initiated the BBI process, if the Court had considered the burden of choice, the Judiciary would have asked itself various questions before dismissing the Bill. Let it be clear to Kenyans that short-termism is not the path to political stabilisation,” President Kenyatta warned.

The tone and tenor of the president’s speech were the exact opposite of what his deputy had said minutes earlier, exposing further their strained relationship after they regained the reins of power. Deputy President William Ruto called for tolerance and respect for the judiciary and the rule of law, which was a rehash of the speech he gave during the National Prayers Day on May 26, which was also ignored by the president.

“We are reminded that our forefathers worked hard so that we can have a democratic nation. We can all celebrate the firm foundation of the rule of law not rule of men. It is a testimony that there is a government that works and delivers. It goes to show that a government that delivers brings a country together,” Ruto told the audience at the new Jomo Kenyatta International Stadium.

BBI or Building Bridges Initiative is the codename given to the constitutional amendment push to expand the executive, institute changes in the composition of the legislature and judiciary to, critics aver, lend them amenable to the whims and fancies of the executive. Consequently, the president has not been amenable to counsel since the High Court quashed the BBI Bill in mid-May.

The president said, “Citizens are required to exercise their will and shoulder the burden of their choices, and so should our independent institutions. The field of independence has been expanded in the Judiciary, and so the field of their responsibility should respond to the summons of nationhood. Their decisions should also be accompanied by a burden of choice. This is what the national conversation should ponder.”

During the tenure of Chief Justice David Maraga, the president often found himself on backfoot for disregarding the judiciary. After failing to bully the judiciary into subservience, he resorted to undermining it by underfunding it and obstinately refusing to approve appointment of judiciary staff.

The president also came under fire from the judiciary for failing to uphold court orders, to the chagrin of legal practitioners, religious organisations and civil society.

It did not come as a surprise when he resorted to berating the judiciary at the slightest criticism, and sometimes using Parliament to undermine or blackmail the Bench.

“If the decision to stop BBI had been subjected to a cost-benefit analysis, in other words if it had considered the burden of choice: If we are in a constitutional moment, is a decision against BBI a decision in support of status quo? We cannot engage in political stabilisation if we live in political denial. For Instance: Everyone knows that BBI is good for the country even those who are unhappy with it, but Kenyans have embraced fear of change instead of continually striving for a fairer, just, peaceful, cohesive and democratic Kenya,” Kenyatta said.

In a historic ruling on May 1, 2021 the High Court declared the Building Bridges Initiative (BBI) “irregular, illegal and unconstitutional, null, and void.” The judges, in addition, observed, “that the creation of 70 more constituencies by the so-called Building Bridges Initiative (BBI) is irregular, illegal, and unconditional.”

The verdict upset the president and his rival-turned-ally Raila Odinga. The two have retained some of the best legal minds in the country to appeal the ruling that faulted the BBI process on 20 items, most of which are subject to public participation.

There are doubts the Court of Appeal will undo all the High Court decisions without executive influence and pressure.

The five judges observed, “There are certain provisions in the Constitution insulated from any amendment at all because they are deemed to express categorical core values. These provisions are unamendable and cannot be changed through secondary constituted or constituted power. The sovereign primary constituent power is only exercisable by the people after four sequential processes namely; civic education, public participation and collection of views, constituted assembly debate and referendum.”

The ruling was a hailed by a faction allied to Deputy President Ruto who described the five judges as godsent, courageous and sticklers of rule of law and constitutionalism.

Mr Odinga said of constitutional amendments, “The handshake has given us an opportunity to bring Kenyans together and enhance development across the country; this is what we want. We must remain united and support BBI which will bring unprecedented development in the country.”

The president’s side responded with rushed appointment of Lady Justice Martha Koome to replace retired Chief Justice David Maraga. Despite serious questions about her professional integrity and impartiality raised by a section of the Bench and the Bar led by President of the Law Society of Kenya (LSK) Nelson Havi, gazetted as she was still being vetted by Parliament.

Mr Havi questioned the hurried gazettement of Justice Koome’s appointment even before she cleared the last hurdle of the interview. It is generally believed her appointment was predetermined.

The LSK has warned that the three arms of government – the executive under Kenyatta, National Assembly under Speaker Justin Muturi and now Justice Koome in the judiciary – will be presided over by one community from Mt Kenya.

In his Independence Day speech, Kenyatta said he would stop at nothing in ensuring that the BBI process is speedily cleared by the courts and that the constitution is amended. The bravado, critics say, is informed by the confidence that, with the Justice Koome at the helm of the judiciary, he is insulated from searing criticism he has had to face in his second term.

He put it starkly, “Those opposing BBI oppose it, not because of its substance, but because they cannot dare to imagine a better Kenya for all. The political class is invited to upgrade their status from being politicians to being Politicians are obsessed with personal gain; but our national pain disturbs leaders.”

In a word, the president’s Independence Day celebrations was an opportunity to pushback at the independence of the judiciary.