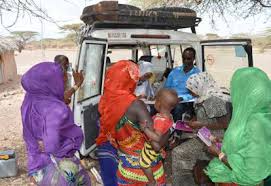 If wishes were horses, octogenarian Jelia Makomba, would roll back time to 30 years ago when the woes that have rendered her almost immobile had not started.

Back then, 80-year-old Makomba, who hails from Bochiroche village, North Mugirango in Nyamira County of Kenya, was a strong woman who went about her own errands until jiggers struck. Now she is a bundle of multiple pustulent lesions that have totally immobilised her.

From her hospital bed in Nyamira County Hospital, where she was dumped by relatives, odour of rotting flesh is felt from 10 metres away. The parasites have sucked life out of her feet, causing her severe infection that has caused her feet to swell.

However, although the hospital offers her a ray of hope and comfort, she not only receives medicine but also psychological support, Makomba worries about the ever-soaring medical bill. This is because she has been on her own since her husband died in the early 1980s.

She is not enrolled on the National Health Insurance Fund to benefit from universal healthcare scheme. Neither is she a beneficiary Inua Jamii, the national government’s social support programme for the elderly.

Makomba is one among the more than 2,000 “jigger patients” in Mugirango, who cannot access quality healthcare as they cannot afford it. The plight of the octogenarian and the 2,000 jigger-ravaged residents of Nyamira brings to the fore the teething challenges the universal health care faces in a region with high abject poverty incidence.

The Nyamira Level Five Hospital Medical Superintendent Samuel Ombati confirms that her condition is treatable. More importantly, it is preventable with proper sanitation and hygiene levels.

Dr Ombati says medics are already treating Makomba with antibiotics. Her wounds are also dressed daily. However, he explains, the octogenarian is not alone as there are thousands of jigger patients who need urgent attention to prevent the epidemic from escalating to pandemic levels.

County Executive Committee for Health Douglas Bosire says there are more than 2,000 households in Mugirango with a similar condition. This implies the number of people suffering from jigger-related health diseases could be far higher than the 2,000 referred to earlier.

Back to her solitary house that stands on a 50-by-50-foot parcel of land, a padlock dangling on the door reminds visitors that the desolate home has been deserted for some time.

Her eldest son, James Abina Kabinga, who lives 200 meters away admits the family had given up on his mother after ‘concluding’ that the condition was a “result of supernatural causation” and therefore irredeemable.

The link to supernatural forces gave way to stigmatisation, hence the physical and psychological isolation she has to endure. She’s been abandoned to waste away and die.

The impact of the isolation was confirmed by her neighbour Joel Ondieki. Mr Ondieki says the community has abandoned the octogenarian and no one wants to associate with her.

Steeped in outdated superstitions, the community believes the pustulent lesions are the work of evil spirits.

Her situation is made worse by abject poverty, which denies her access to proper medication and diet.

Appealing for assistance from local leaders for her and food since she does not have an National Health Insurance Fund card, Ondieki describes the old lady’s plight as dire because all her children are illiterate, hence jobless.

Mr Bosire now appeals to the residents to observe hygiene including regular smearing of mud houses, and sanitation.

To wipe out the epidemic, the county has hired 1,400 volunteers, who, besides surveillance and tracking new conditions, also spray villages they suspect are at the risk of the jigger epidemic.

The county, he says, partners with Red Cross to provide footwear for the vulnerable population. He warns against stigmatising the affected saying it was leading to un- ending cycle since community tends to hide those affected.

Sorghum no longer an ‘orphaned’ crop in parts Kenya

Central Kenya man with over 500,000 medicinal herbs on his farm seeks help