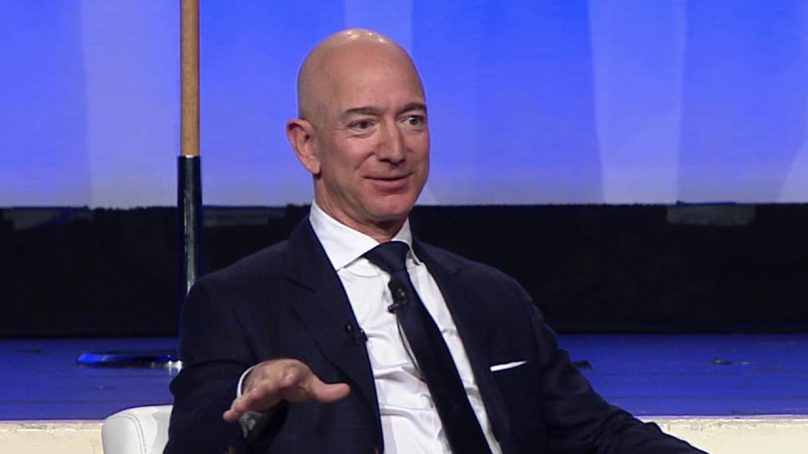 What happens when the world’s second wealthiest human suddenly switches careers? If you’re Amazon founder and chief executive Jeff Bezos, you can now spend more time with your Rich Person Pursuits. On Tuesday, Bezos announced that he’s stepping down as Amazon’s boss and will focus on The Washington Post, which he bought in 2013.

He says he will in addition be exploring space with his rocket company Blue Origin and trying to salvage our rapidly deteriorating planet with a $10 billion environmental cheque-book called the Bezos Earth Fund, which seeks to support scientists, activists and nongovernmental organisations in developing solutions for the planet’s various ills.

Now that Bezos has pledged to devote more time to his namesake fund, how might he go about trying to fix the world? A press official from an agency representing the Bezos Earth Fund wouldn’t go on the record about it and the fund has no public-facing website or social media feed.

Bezos himself announced the fund’s launch via a single Instagram post from his own account. But we can glean a bit of information about where the effort is heading by where its money has gone so far.

Back in November, Bezos named the first recipients of that funding. Included among the groups are the Environmental Defence Fund ($100 million), the Climate Works Foundation ($50 million) and the Nature Conservancy ($100 million). Most grantees got money for specific projects, though some have been allowed to re-grant money to other non-profits.

“The gift the Nature Conservancy received in November 2020 is transformational and will allow us to work with communities and partners on the ground to protect the largest temperate rainforest on Earth, increase sustainable farming practices, and scale natural climate solutions that are needed to stabilize our climate,” says Elizabeth Gray, global managing director of climate at the conservancy.

Without a major course correction, we’re headed for ever-more-severe consequences – disasters like massive sea level rise, more extreme weather like hurricanes and heat waves, and the wide-scale extinction of species.

That previously put Bezos in an odd position. Amazon, after all, is a capitalism machine. Running distribution centres, plus all that shipping, creates an enormous carbon footprint. In 2019, the company pledged to go carbon neutral by 2040. That was not enough for some Amazon employees, who walked off the job in protest.

Experts say that the top of humanity’s climate concerns is reducing emissions – basically, the deployment of green energy at a huge scale and quickly. That’s absolutely critical if we have any hope of hitting the Paris Climate Agreement’s goal of keeping warming to two degrees Celsius above pre-industrial levels, and certainly if we want to meet the agreement’s even more optimistic 1.5-degree goal.

At the most basic level, we need better tools for detecting where greenhouse emissions are even coming from, says Zeke Hausfather, a climate scientist and the director of climate and energy at the Breakthrough Institute, which advocates for climate action. The group has not received funding from the Bezos Earth Fund.

But scientists have already developed more powerful tools for cataloguing CO2 admissions, at least: A project called Vulcan has grown so comprehensive that it can model emissions block by block in Los Angeles. Vulcan’s developer has also used the tool to show that on average, American cities are actually underreporting their greenhouse gas emissions by nearly 20 per cent. So, in general, local officials need to get a better handle on exactly where their city’s emissions are coming from.

While it’s cheaper than ever to cut those emissions, given the plummeting prices of solar and wind power, the US also has an infrastructure problem: Our national grid isn’t designed for cross-country transportation of electricity. We’ve got the build-up of solar power facilities in the sunny Southwest, and the build-up of wind farms on the East Coast.

But when the sun goes down, the west can’t draw wind power from the east and when wind does not blow, the east can’t draw power from the west. “The intermittent nature of their generation really means that they need a lot of complementary technologies to reach their full potential,” says Hausfather—namely, big batteries to store surplus energy, to be drawn upon when the conditions turn against any one kind of energy generation.

The temptation will be to throw money at the cutting-edge science that will help get us out of this mess, particularly negative-emissions technologies. One promising technique is known as direct air capture, or DAC. These are giant machines suck in air, scrub it of CO2 and then sequester that carbon underground forever. Yes, the UN’s Intergovernmental Panel on Climate Change notes that if we want to meet the 1.5-degree target, we have to deploy such negative-emissions concepts. But DAC is a tool, not a solution in and of itself. First and foremost, humanity must reduce its emissions levels, dramatically and quickly.

Bezos should also consider how solutions can involve a diverse spectrum of people, lest they risk leaving some groups behind. “Those most impacted by climate change and structural inequity are best placed to implement equitable climate solutions,” says Elizabeth Sawin, codirector of Climate Interactive, which advocates for equitable solutions to climate change. Sawin’s group hasn’t received money from the Bezos Earth Fund, either.

“Are the funds flowing to campaigns led by folks in the communities most impacted by climate change? Are the dollars targeted at organizations and movements led by people of colour, workers, women, and immigrants?”

The Bezos Earth Fund has given $151 million so far to several groups focusing on environmental justice, including the Climate and Clean Energy Equity Fund and the Hive Fund for Climate and Gender Justice. Both will award grants to groups that focus on problems that involve intersecting climate and racial issues.

When it comes to climate inequities, low-income Americans and people of colour, for instance, are more likely to live in “urban heat islands.” Poorer urban neighbourhoods typically have less green space compared to the suburbs. And when the sun’s energy hits a city’s concrete-and-asphalt landscape, all the buildings and streets absorb the heat and slowly release it at night. The greenery of the suburbs, by contrast, actually cools the area.

Another component of strategic funding, according to Sawin, is deploying “multi-solving” techniques to address several problems at once. So, for example, employing urban residents to green up their neighbourhoods puts money in their pockets and prepares their cities for climate change-driven heatwaves.

Sawin says organisers should ask themselves: “Are the strategies reducing emissions while also creating jobs, or cleaner air, or conserving water, or reducing the utility bills of people on fixed incomes?”

Also, climate activists say the fund’s leaders should consider addressing shipping, which helped Bezos build his Amazon empire, but is a major contributor to the climate crisis. “If it were a country, the shipping industry would be the sixth largest greenhouse gas emitter,” says Janis Searles Jones, CEO of the Ocean Conservancy, which hasn’t received funding from the Bezos Earth Fund. “That’s on par with a G7 country. If left unchecked, the shipping industry will represent 18 percent of greenhouse gas emissions by 2050. We can’t afford to ignore this source of emissions internationally or here at home in the US.”

Decarbonising the industry, though, will not be easy. Like airliners, cargo ships cannot run on existing solar technology. But a stopgap measure may be to make them carbon-neutral. Scientists are working on ways to turn the carbon captured from DAC machines into fuel, which could then power large vessels, allowing them to re-burn carbon that was already in the atmosphere.

And the shipping industry is not alone in its carbon-spewing. “Combined, the industrial sector and the agricultural sector are much bigger than either transport or power generation in terms of their emissions, but they’re also much harder to decarbonise,” says Hausfather, of the Breakthrough Institute. Livestock alone contribute 14.5 per cent of global anthropogenic greenhouse emissions, according to the UN’s Food and Agriculture Organisation.