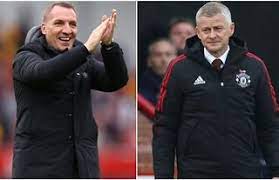 A report claims that Leicester City manager Brendan Rodgers has verbally agreed to take over as Manchester United manager when the position becomes available.

Ole Gunnar Solskjaer is coming under intense scrutiny to improve results at United. Saturday’s toothless display in a 2-0 derby loss at home to Manchester City further intensified the pressure. Reports suggested the Norwegian had three games to save his job following the 5-0 drubbing at the hands of Liverpool.

The Red Devils responded by beating Tottenham 3-0. But they struggled to a 2-2 Champions League draw with Atalanta before going down to the Citizens.

It seems to be manager sacking season in the top flight, with Steve Bruce, Nuno Espirito Santo, Daniel Farke and Dean Smith all jettisoned. And Solskjaer could be the next man to go if reports are to be believed.

Many names have been linked with the Old Trafford hotseat. Ralf Rangnick was mentioned as a possible replacement on Sunday.

The German is currently head of sports and development at Russian outfit Lokomotiv Moscow. But CaughtOffside are suggesting that Foxes chief Rodgers has been approached and agreed to take the job once there is a vacancy.

The Northern Irishman’s stock has risen even higher since he moved to King Power Stadium from Celtic. He won two league titles, a couple of Scottish Cups and three Scottish League Cups while in Glasgow.

However, managing in the Premier League is a tougher proposition. But he has guided the East Midlanders to back-to-back fifth-place finishes.

The former Swansea chief is considered one of the best coaches around and has been linked with United in recent weeks. But, if the report is true, developments are at a more advanced stage than first thought.

Many pundits believe that Solskjaer’s status as a club playing legend has bought him time at the Theatre of Dreams. Many managers have been sacked for achieving better results but it cannot go on for ever.

Six losses from their last 12 games in all competitions means the knives are out and he needs to turn things around quickly. Rodgers spent three years in charge of Liverpool.

He did not win a trophy and was sacked in October 2015. But there is a sense that he has earned the right to manage one of the big boys again.

CaughtOffside also state that Rodgers would prefer to see out the current season with Leicester and move to Old Trafford next summer.