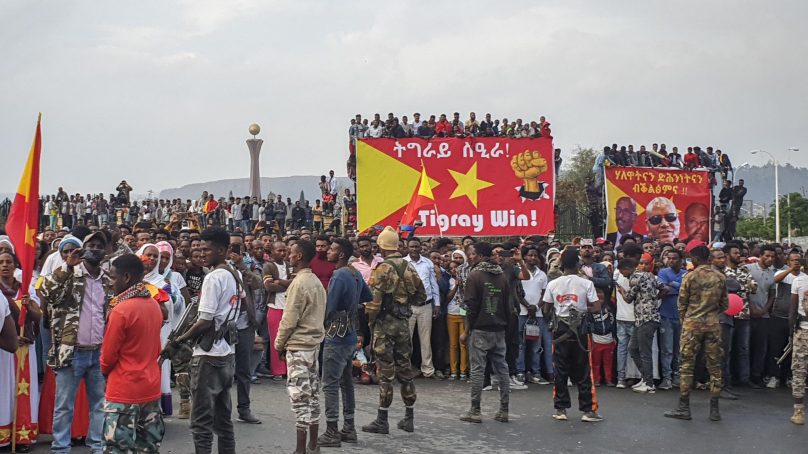 I came here to fight: Inspired 16-year old girl tells of desire to avenge death of her Tigray kin

A 16-year-old girl who hoped to go to war against Ethiopia People’s Defence Force says she was inspired by the sight of resurgent local forces marching in to retake the capital of Ethiopia’s Tigray region six months after being forced to flee.

The girl, Meron Mezgeb, narrates how she waited in a crowd seeking to get a gun and join them.

“I came here because I saw girls like me being raped” by combatants, she said. “I actually wanted to go (fight) at the beginning but I was told I was too young. But because I saw my comrades come, I came here to fight alongside them.”

The scenes of jubilation and determination in the city of Mekele, in video smuggled out of Tigray days later, are a rare look at the dramatic turn in a conflict that has threatened to destabilise one of Africa’s most populous and powerful countries.

After months of fear in a city occupied by Ethiopian soldiers and forces from neighbouring Eritrea who pursued the Tigray regional leaders, crowds of Mekele residents rushed to the local security bureau to sign up to fight.

They were buoyed by the striking sight of a long parade of thousands of Ethiopian soldiers now held as prisoners of war, and by Tigray leaders walking openly in the city again. Residents lining the streets jeered the prisoners and cheered their leaders.

The Tigray leaders have rejected a unilateral cease-fire that Ethiopia’s government announced as its soldiers retreated from Mekele, and they have vowed to chase “enemies” out of the rest of the Tigray region. With the retreat of Ethiopian and Eritrean forces, that means fighting against forces from the neighbouring Amhara region who seized large parts of western and southern Tigray during the eight-month war.

“The fighting will not be limited simply to the Tigray borders” if needed, the Tigray president, Debretsion Gebremichael, said in an interview. “We have to have some guarantee that they will not come back again.”

While the Tigray forces now control large areas, the region has remained largely cut off from the world, with transport and communications links severed or blocked. After months of looting and destruction that witnesses have blamed on Ethiopian and allied forces, the United Nations is still highly concerned about the fate of millions of civilians as food runs short amid famine conditions.

Only on Monday, days after Ethiopian Prime Minister Abiy Ahmed told the UN secretary-general that Tigray would be open to “immediate” aid, did the UN World Food Program announce that 50 trucks of badly needed supplies had rolled into Mekele. Two weeks had passed since such aid last arrived and the WFP warned that “double this number of trucks needs to be moving in every day to meet the vast humanitarian needs in the region.”

For residents, the UN convoy was a welcome sight. But the months of conflict mean a return to normal is still far away.

“I am a driver,” said Hiluf Abrha, another resident hoping to join the Tigray forces. “Because the Amhara forces committed a lot of atrocities, because they killed my uncle, I parked my truck and came here to register so that I can join the struggle.”

For the prisoners of war, many of whom the Tigray leaders have said will be released, conditions are challenging because of the destruction that Ethiopian and allied forces waged for months against almost all health centres across Tigray.

At a camp for the prisoners, soldiers lay on the ground, some trying to nurse injuries with little care available. “This is more than our capacity,” said Yusuf Ibrahim, medical coordinator for the Tigray forces. He called for more international aid.

“They can only do for us when they have something for themselves first. It is difficult for me to say they haven’t helped us, they have helped us as much as they can,” said one prisoner, Menor Arrarso, who said there was nothing to eat or wear.

He showed his wounded hand and said he had walked more than 100 kilometres (60 miles) in that condition.

They couldn’t provide us with transportation when we came here,” he said. “Two or three people died right here among us who could have been saved had we gone to our homes and gotten treatment. This is because here there is a lack of treatment.”

Another prisoner, Sewareg Bireda, agreed. Aside from the lack of food, “they don’t give us the necessary additional medicine, like painkillers. Apart from that, they are helping us as much as they can.”

More than 6,000 Ethiopian soldiers and officers had been detained, the Tigray president said.

“We are committed to keep them well as long as they are with us,” he said. “And after a while, yes, our plan is … they have to be free, wherever they want.”

But if evidence emerges that any prisoner had committed an atrocity in the war, he added, “we will keep them because they have to go to court.”