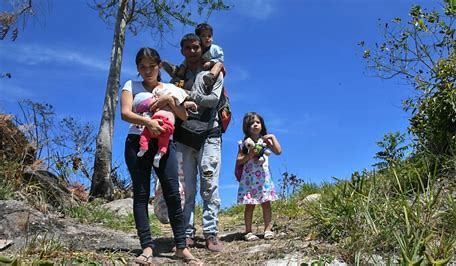 Roughly 7,000 Indigenous Warao people have migrated to Brazil from Venezuela, often arrive malnourished and destitute. Language is major hurdle as the migrants have limited knowledge of Spanish, let alone Portuguese.

Last year, in neighbouring Guyana also International Organization for Migration (IOM) and NGOs, the initiative was set up to relieve pressure on public services in the state of Roraima, where they arrive from Venezuela. But as a Reuters investigation into the programme recently revealed, abuses and exploitation of informal workers, including by criminal groups, is widespread.

On the more positive side, the city of Sāo Paulo has created a system providing guidance and support for migrants, including facilitating access to bank accounts allowing them to send earnings home.

Last year, the government simplified the process for obtaining two-year temporary residence permits. Roughly 75 per cent of applications by Venezuelans have been for residency since the system was launched in 2018, with the remaining number having applied for asylum.

Following a pandemic closure, its official southern border crossings opened in February for only Ecuadoreans and Peruvians, leaving most Venezuelans to cross informally in either direction, with some 60 per cent of Venezuelans heading southward to Peru and Chile and the remainder entering Ecuador.

In June, Ecuador’s government announced an “amnesty” for migrants whose status remains irregular, granting them renewable two-year residency visas and thus removing any remaining barriers to basic public services and entrepreneurship. While this was the second time that the government has announced a regularisation programme, some 62 per cent of Venezuelans lacked legal status in the country in 2021.

But here too, rising xenophobia and discrimination, as well as the economic impact of Covid-19, have left migrants experiencing greater hardship.

The IRC reported earlier this year that 70 per cent of Venezuelans surveyed said food was a major concern, while a similar proportion worried about affording rent. With only one in four in possession of a passport and many others unable to afford $250 for a work permit, most migrants work illegally, running the risk of being fined and exploited by employers.

For many Venezuelans living in northern states along the Caribbean coast, far from the well-trodden border crossing into Colombia near Cúcuta, fleeing via sea to nearby islands appears an easier alternative, avoiding the high costs of sparse transport amid ongoing fuel shortages. In April 2022, regional officials noted that irregular movements along these routes were at a record high.

Trinidad and Tobago, the closest islands, located just 24 kilometres from Venezuela’s poor northern state of Sucre – where the tourism and oil sectors have all but collapsed – has drawn over 28,000 Venezuelans, often risking their lives in the hands of smugglers and people traffickers. Those who survive shipwrecks and often-violent confrontations with border patrols are afforded little protection on arrival, and women risk being trafficked or taken into sexual slavery, sometimes with the complicity of local officials.

Similarly dangerous sea routes are taken to the neighbouring Dutch islands of Aruba and Curaçao – ranking first and third in terms of Venezuelans per domestic population anywhere in the world, with 17,000 migrants in each territory. Unlike Aruba, Curaçao doesn’t recognise the 1951 Refugee Convention, and migrants have long risked detention and abuse there.

The Dominican Republic was used until recently as a bridge for deportation flights for Venezuelans from the United States initiated by president Donald Trump. Last year, it introduced a programme to regularise the status of more than 115,000 Venezuelans living in the country – a sharp contrast to the government’s heavy-handed treatment of Haitians who have crossed their eastern border amid their country’s deepening humanitarian crisis.

Worsening economic opportunities and rising xenophobia in South America have seen many Venezuelan migrants who had already settled in the region taking greater risks to resume their search for better lives by heading north through Central America, in the hope that the US authorities may be less likely to deport them than other nationalities.

Venezuelans became the leading nationality taking the treacherous route through the Darién Gap between Colombia and Panama during the first five months of 2022. The trend strengthened as Mexico and many Central American countries imposed visa requirements for Venezuelans, cutting off air routes.

Instead of flying to Mexico, many Venezuelans, lacking passports or other official documentation, are taking the riskier land route from South America, often paying smugglers to cross borders illegally. Official documents are particularly difficult and costly to obtain in Venezuela and abroad, due to limited consular representation.

Until January, when Mexico’s visa mandate was announced, Venezuelans had been apprehended at record levels by US border officials, falling from a high a month earlier, of 24,000 to barely 3,000.

Meanwhile, the number of Venezuelans applying for asylum in Mexico tripled between January and May, when 1,268 Venezuelans applied. “It meant that people didn’t stop moving because of the visa requirement, they instead started moving by foot,” Rápido explained.

In February, Costa Rica became the latest country in Central America to impose a visa requirement on Venezuelans, further complicating their transit through the region.

In March 2021, President Joe Biden’s administration announced a programme to grant temporary protection status to Venezuelans. Trump had refused to do so, instead deporting migrants back on secret flights. In spite of Biden’s criticism of these deportations, the flights appear to have continued until at least last December. This week, the US government said it would extend the TPS allowance for an additional 18 months. Since 2014, more than 350,000 Venezuelans have migrated to the United States.

The New Humanitarian used transportation provided by Save the Children for the Peru part of this story.