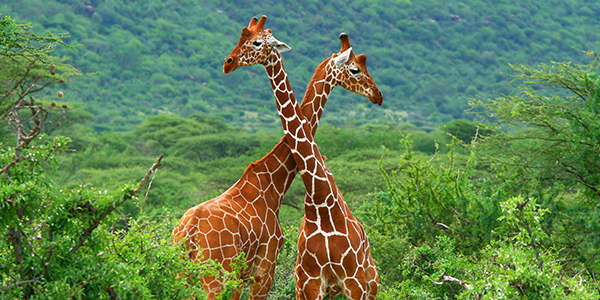 Heads up! Blood pressure of 110/70 is normal for large mammals, but giraffes are okay with 220/180 pressures

Because of their height, giraffes require scarily high blood pressures – yet they escape the massive health problems that plague people with hypertension. Can clinicians learn from these animals?

Giraffes have sky-high blood pressure because of their sky-high heads that, in adults, rise about six meters above the ground – a long, long way for a heart to pump blood against gravity. To have a blood pressure of 110/70 at the brain — about normal for a large mammal – giraffes need a blood pressure at the heart of about 220/180.

In people, chronic high blood pressure causes a thickening of the heart muscles. The left ventricle of the heart becomes stiffer and less able to fill again after each stroke, leading to a disease known as diastolic heart failure, characterised by fatigue, shortness of breath and reduced ability to exercise. This type of heart failure is responsible for nearly half of the 6.2 million heart failure cases in the US today.

And the giraffe has another trick to avoid heart failure: The electrical rhythm of its heart differs from that of other mammals so that the ventricular-filling phase of the heartbeat is extended, Natterson-Horowitz found. (Neither of her studies has been published yet.) This allows the heart to pump more blood with each stroke, allowing a giraffe to run hard despite its thicker heart muscle. “All you have to do is look at a picture of a fleeing giraffe,” Natterson-Horowitz says, “and you realise that the giraffe has solved the problem.”

The great height of giraffes poses a problem when they drink: Lowering the head so far should dramatically increase blood pressure to the head. Lifting it again should cause a corresponding drop in cranial blood pressure – an extreme version of what often happens when a person stands up suddenly. Cardiovascular researchers are trying to understand how giraffes minimise this problem.

Natterson-Horowitz is now turning her attention to another problem that giraffes seem to have solved: high blood pressure during pregnancy, a condition known as preeclampsia. In people, this can lead to severe complications that include liver damage, kidney failure and detachment of the placenta. Yet giraffes seem to fare just fine. Natterson-Horowitz and her team are hoping to study the placentas of pregnant giraffes to see if they have unique adaptations that allow this.

People who suffer from hypertension are also prone to annoying swelling in their legs and ankles because the high pressure forces water out of blood vessels and into the tissue. But you only have to look at the slender legs of a giraffe to know that they’ve solved that problem, too.

Aalkjær’s team tested the effect of this by injecting a small amount of saline solution beneath the wrapping into the legs of four giraffes that had been anesthetised for other reasons. Successful injection required much more pressure in the lower leg than a comparable injection in the neck, the team found, indicating that the wrapping helped resist leakage.

Giraffes also have thick-walled arteries near their knees that might act as flow restrictors, Aalkjær and others have found. This could lower the blood pressure in the lower legs, much as a kink in a garden hose causes water pressure to drop beyond the kink. It remains unclear, however, whether giraffes open and close the arteries to regulate lower-leg pressure as needed.

“It would be fun to imagine that when the giraffe is standing still out there, it’s closing off that sphincter just beneath the knee,” says Aalkjær. “But we don’t know.”

At least part of the answer seems to be that giraffes can buffer these sudden changes in blood pressure. In anesthetised giraffes whose heads could be raised and lowered with ropes and pulleys, Aalkjær has found that blood pools in the big veins of the neck when the head is down.

This stores more than a liter of blood, temporarily reducing the amount of blood returning to the heart. With less blood available, the heart generates less pressure with each beat while the head’s down. As the head is raised again, the stored blood rushes suddenly back to the heart, which responds with a vigorous, high-pressure stroke that helps pump blood up to the brain.

Social vulnerability: Don’t try to be everything to everyone or to catch every ball that is thrown at you