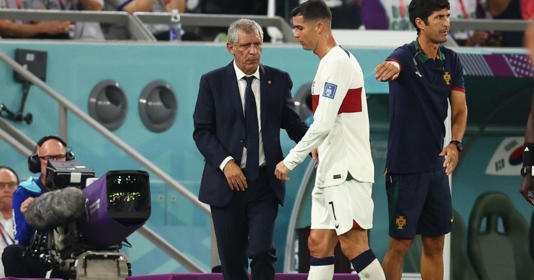 Cristiano Ronaldo has revealed he told South Korea’s Cho Gue Sung to “shut up” as he walked off the pitch in Portugal’s 2-1 loss.

South Korea looked to be heading home from Qatar before Son Heung-min broke free following a Portugal corner and played a perfect pass for Hwang to slot home in the 91st minute for a 2-1 victory.

Following Uruguay’s 2-0 win against Ghana, South Korea join the Portuguese, who had already booked their place in the last 16 after winning their opening two fixtures, in the next round having scored more goals than the South Americans.

Ronaldo was substituted in the 65th minute of the match and was annoyed by Korea’s Gue Sung who told him to get off the pitch quickly. The former Manchester United striker – who left Old Trafford last week by mutual agreement – was involved in a heated altercation with both players exchanging words.

Ronaldo played the incident down and told reporters, “Before my substitution, one of their players was telling me to leave quickly. I told him to shut up, he has no authority, he doesn’t have to say anything. I would speed up the pace if the referee said so. He doesn’t have to. There’s no controversy, it happened in the heat of the game.

“We’re in the next stage. We have to be, not only players, but all Portuguese people, because we want to go through and that’s what we’re going to try to do.”

Portugal boss Fernando Santos insists the exchange was a “perfectly normal” part of football with Ronaldo coming off the pitch “angry”.

The Portugal gaffer was forced to explain what happened after Portuguese newspaper A Bola claimed that Ronaldo shouted towards his own bench: “You’re in such a hurry to take me off.”

Santos said, “Ronaldo came off the pitch angry, yes, but with the Korean player who was insulting him and sending him away from the pitch. He replied to him and that is perfectly normal. I heard what the Korean player said, in English, and I have no doubt about it and Ronaldo replied “you must be in a big hurry for me to leave.” Pepe even went after the Korean player because of that.”

On losing to South Korea, Santos added: “We lost our organisation, our focus, and Korea controlled more of the game. Of course our players were motivated, but we conceded a goal when they were on a counter-attack and this can happen at a major tournament. We are upset. We finished first of the group, but we wanted to win, and we wanted a better game in order to increase the morale of the players. That said, they will not be unmotivated. I trust my team, but this result serves as a warning to them.”