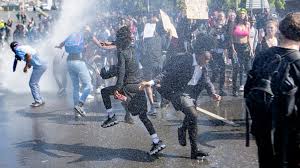 South Africa President Cyril Ramaphosa may now finally be in a position where he can advance his own agenda. Key to this, of course, would be ensuring the rule of law, the document that he helped to negotiate in the 1990s.

As the physical dust begins to settle it is clear that the political smoke of the events of the last two weeks is likely to smoulder for quite some time. This is surely the biggest test of the ANC’s ability to both govern, and to survive while doing it. It is now likely to face questions/doubts/attacks over its legitimacy, its coherence, its ability to do anything, and the will to live and survive.

It is a historic fluke that the ruling party may be “lucky” that this great chasm has finally exploded at a time when there is no serious, and growing, opposition to it. And it may be the party’s ability to create and govern through coalitions of interests that keeps it in power, and possibly leads to some sort of positive rebirth.

The political power of President Cyril Ramaphosa and the likely tightening of the ranks behind him as a variant of “wartime president” positioning may turn out to be the key to this paradox of staying in power while mismanaging South Africa into an existential crisis.

There is now no shred of a doubt that the people of our country will put the blame for the events of last week on the actions of the ANC and its leaders over the many years.

To put the argument in its strongest terms: It was the ANC’s economic policies and its incompetent/corrupt delivery of the past 25 years that created the fertile ground for looting; it was infighting between leaders, and the corresponding rank-and-file members, of the ANC and the arrest of its former leader for contempt of the Constitutional Court that started the fire, and it was the ANC’s own politicisation of the State Security Agency (SSA) and the police Crime Intelligence that meant the state could not properly respond to it.

Of course, the party has tried to rebut these points. When they were put to the ANC’s head of presidency, Sibongile Besani, on SAfm last week conceded that the party “cannot run away from its responsibility as the governing party”. He conceded that certain failures in the past had led to this situation.

But Besani also tried to focus on what the ANC has said is its renewal, that it is trying to fix itself and govern better in the future.

While there is some evidence of this, as has been seen in the implementation of the party’s “step aside” resolution and the suspension of people such as Secretary-General Ace Magashule, there is also evidence of failure.

Police Minister Bheki Cele has asked the president to consider removing Khehla Sitole as national police commissioner, State Security Minister Ayanda Dlodlo has explained how there are concerns about the SSA, the person publicly accused of running a parallel intelligence network for Zuma, Arthur Fraser, is still the commissioner of correctional services, Nosiviwe Mapisa-Nqakula is still defence minister despite unbelievable scandal…

However, strangely, this may be the one oment when that reformist president gets more political power than he could have dreamed of.

There is plenty of evidence that the overwhelming number of people in South Africa believe in democracy as still the best form of government (or at least, as Churchill once put it, it’s the worst form, “apart from all the others”…).

When the man who was democratically elected to be head of state tells the people who voted that their votes are under attack, he is likely to benefit from that statement. It is possible that because, as some see it, our constitutional order is under threat, he can claim to be the only person capable of defending it. (As opposed to Donald Trump’s “I alone can fix it”.)

While the violence and looting of the last week was terrible to behold, life-changing for those affected by it and perhaps too hard to recover from, it is important to remember that there were seven provinces where this did not happen.

To put it another way, if Ramaphosa were to now grant former president Jacob Zuma a presidential pardon after the violence, it is possible the ANC could lose support (or lose outright) in those seven provinces, such would be the outrage.

But now that Ramaphosa is the face of the constitutional order that is under attack, he has more political room to act; it will be very difficult for any opponent in the ANC to stand up to him, not after the destruction, mayhem and what looks suspiciously like an attempted coup by the faction aligned to Zuma and Magashule.

In some cases, it may even be hard for opposition parties to oppose him, as happened in the early days of the Covid-19 pandemic.

There are parallels with the presidency of George W Bush in the US nearly 20 years ago. It was the attacks of 9/11 that increased his support to the point where he and his supporters could carry out their evangelist agendas. This led to the invasion of Iraq and changes to the domestic policies of the US, both of which had long-term effects.

It is not possible to know if he would have been able to do this without the attacks, but it would surely have been harder for him to accomplish as a peacetime president.

Ramaphosa may now finally be in a position where he can advance his own agenda. Key to this, of course, would be ensuring the rule of law, the document that he helped to negotiate in the 1990s.

In the shorter term, the ANC may well have immense problems among its core constituencies. People are poorer, angrier and sicker than at any other time in many years. Much of this is because of the party’s own failures (did the fact that ANC MPs voted to protect Zuma’s looting at Nkandla contribute to the looting of last week?).

Often a failing economy and high levels of unemployment put the governing party under pressure in elections. However, there is little evidence here that opposition parties are able to benefit from this.

The DA appears to have given up on broadening its appeal to voters, while the EFF’s leaders have made completely contradictory statements about the violence, the economy and Zuma, and are likely to be boxed into a corner of their own making.

These grave political mistakes by leading opposition parties are likely to allow the ANC to stay in power regardless of its mostly shambolic performance.

There is another historical resonance. After the violence and starvation of the Cultural Revolution, the Communist Party of China changed direction dramatically and introduced measures that eventually led to its own version of capitalism. While China is still not a free nation in the Western sense of the word, it is certainly a much richer one where millions of people have been able to lift themselves out of poverty.

In South Africa, the ANC has a major advantage over the DA, the EFF, the IFP and even those with grand personal agendas such as Herman Mashaba’s ActionSA. The ANC (probably) still has the ability to stitch together a broad national coalition involving people from different classes, language groups, ethnic identities and interests.

It has a figurehead who is the most popular politician in the country and states publicly that he believes in the rule of law and is working towards that end. It just so happens that he also now has more power than ever before.

But none of this is certain, or cast in stone. Much can still happen which could derail the party. Many, particularly in KZN, may still feel that they are on a knife’s edge, that more violence could still happen and make the situation even worse.

The performance, grit and commitment of the country’s (and the ANC’s) leadership is going to be absolutely critical to what happens next.

Accept or reject Covid vaccine? That’s the question as Africans give the vaxxers a wide berth