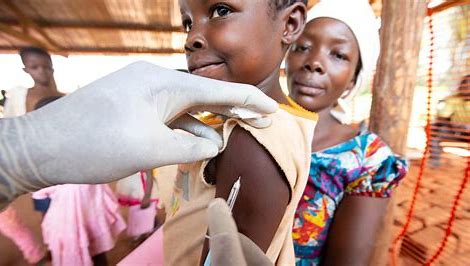 Accept or reject Covid vaccine? That’s the question as Africans give the vaxxers a wide berth

Misinformation about Covid-19 vaccines often starts life in Europe or the United States but has found fertile ground in Africa, which poses a challenge for local health leaders.

Shade is a 58-year-old Nigerian frontline health-worker living with osteoarthritis. She is also overweight, diabetic and hypertensive, all of which made her first in line for a vaccine against Covid-19 when it finally became available in Nigeria. Her eldest daughter booked an appointment for her at their local primary healthcare centre, but when the day came to receive her first dose of the vaccine against Covid-19, she changed her mind.

Shade instead chose to take her chance with the virus instead of getting vaccinated.

“It isn’t about my trypanophobia [fear of needles], it’s the aftermath of a constellation of conflicting, confusing and scary messaging and reports on the safety and politics of the vaccine. I saw videos of people getting dizzy and fainting after receiving the vaccine. We also heard of people that developed blood clots and died afterwards. So many uncertainties made me doubt whether I really need the vaccine,” she tells Nature Medicine.

Shade is not the only frontline health worker to refuse a vaccine against Covid-19, despite its availability.

Vaccine hesitancy is a phenomenon that predates Covid-19. A 2015 report by the European Centre for Disease Prevention and Control noted that vaccine-hesitant healthcare workers might spread unfounded concerns about vaccines to the general population, recommend vaccines less frequently to their patients, and reduce vaccine confidence and uptake. Vaccine hesitancy is therefore a major concern in the global fight against the Covid-19 pandemic.

“We should be worried that up to 40 per cent of medical staff in a number of countries have expressed doubt about the vaccination,” says Roger Tatoud, deputy director for HIV Programmes at the International Aids Society.

Whether or not to receive a vaccine is a person’s individual decision, but vaccine hesitancy may prevent herd immunity from being reached, especially in sub-Saharan Africa, where vaccine doses are sparingly available and the anti-vaccine campaign has influential mouthpieces.

In January 2021, former Tanzanian President John Magufuli cast doubt on the effectiveness of vaccines against Covid-19, and even denied the existence of SARS-CoV-2 in his country. After his death, his successor, Samia Suluhu Hassan, decided to take a different approach when she said the country “cannot isolate ourselves as an island while the world is moving in a different direction.”

Even though a committee to advise the government on Covid-19 has been set up and its members are public-health and medical experts, and strict Covid-19-prevention measures have been reintroduced, Tanzania is yet to announce any vaccination plans. There remains formidable opposition to vaccines against Covid-19 in Tanzania, even by some key players in the country’s science ecosystem.

In early April 2021, Wilcox Onyemekeihia, Secretary of Programmes of the Senior Special Adviser on Youth Affairs in Nigeria’s Cross River State, was on a panel that discussed the myths and realities of vaccine hesitancy for Covid-19 and other vaccine-preventable diseases.

To the alarm of some on the panel, Onyemekeihia queried the vaccine’s quick development process, overhyped the side effects of the vaccines and questioned the true status of the pandemic in Africa—implying vaccines were unnecessary, given the associated risks. All of these talking points were straight from the anti-vaccine playbook.

Onyemekeihia continues to share vaccine-hesitancy sentiments on social media, views that may be influenced by one of Nigeria’s top pastors, who connected 5G to Covid-19 and spread other vaccine myths.

In early December 2020, before doses of vaccines against COVID-19 became available in Africa, vaccine hesitancy was already gaining momentum globally. Melissa Fleming, chief spokesperson for the United High Commissioner for Refugees notes that miscommunications probably originated in Western countries, especially the United States and Europe, and these were fuelling vaccine hesitancy in Africa.

“Building vaccine confidence is an issue across the globe. What we’re really concerned about is that these pieces of misinformation that are created in the USA or in the UK, are travelling and finding some fertile ground in Africa as well,” Fleming says.

Richard Mihigo, coordinator of the Immunisation and Vaccine Development Programme of the World Health Organization (WHO) Regional Office for Africa, says vaccine hesitancy in Africa is not being driven by people’s fears alone. According to Mihigo, international groups are fuelling anti-vaccine tendencies that had not been seen in Africa before Covd-19. “Anti-vaxxers in some Western countries are taking advantage of all the concerns about the adverse effects of vaccines. We need to address the spread of vaccine misinformation in Africa,” says Mihigo.

When the first case of Covid-19 was confirmed in Nigeria, officials at the Nigeria Centre for Disease Control, led by the director general, Chikwe Ihekweazu, described a miscommunication menace, enabled by social media, as a major threat to the country. COVID-19 is the first pandemic since mobile, internet and broadband use expanded in Africa. The number of people in sub-Saharan Africa with access to a mobile broadband network more than doubled from 120 million people (13 per cent) in 2014 to 270 million (26 per cent) in 2019.

“In terms of vaccine hesitancy, we’ve seen a surge in misinformation, particularly in urban areas where there’s high penetration of social media. We’re working on aggressively supporting countries on how to provide the right information to educate the people,” Mihigo adds.

Africa has vast experience with vaccinations, so much so that countries like Ethiopia have been able to continue routine immunisation exercises for measles, reaching millions of children in the middle of the pandemic. The WHO and the Africa Centres for Disease Control and Prevention were keen to report that several African countries, including Rwanda and Ghana, quickly rolled out doses of vaccines against Covid-19 from Covax and other donors.

But not all African countries have performed as well. Formerly known as Zaire, the Democratic Republic of Congo (DRC) is located in Central Africa, and by area, it is the largest country in sub-Saharan Africa, the second largest in all of Africa and the eleventh largest in the world.

The DRC has a battered health system that leaves children at the mercy of killer diseases, including malaria, cholera and measles. The DRC has reported more Ebola outbreaks than any other country in the world and continues to face a complex humanitarian crisis.

Since the Covid-19 pandemic began in the DRC in 2020, misinformation has been a major force slowing down progress, according to warnings from Doctors Without Borders. Misinformation is further complicated by scepticism about the seriousness of Covid-19 relative to that of Ebola and other leading causes of death in the DRC. The vaccine rollout in DRC was paused following news of vaccine-linked complications in Europe. This suspension was subsequently lifted but may have further damaged vaccine acceptance, as seen when the DRC returned 1.3 million doses of vaccines against COVID-19, supplied by Covax, for redistribution to other countries.