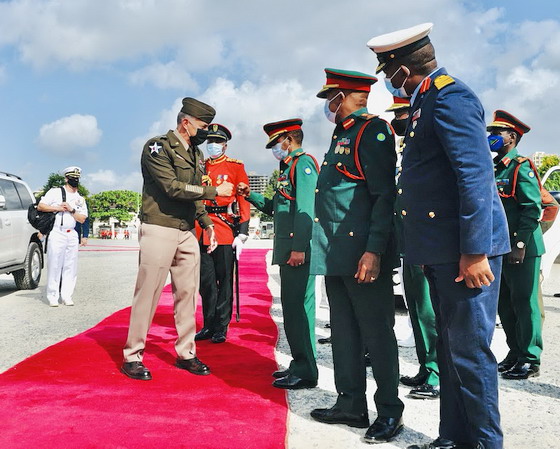 US Africa Command leaders conducted a multi-national East Africa trip, visiting Kenya, Tanzania, Somalia and Djibouti from July 25-30, during which they took part in military exercises in the East African marine military bases.

Prior to the opening ceremony, Townsend met with key Kenyan military leaders in Mombasa to discuss cooperative efforts to enhance regional security and stability.

“The US Africa Command mission is partner-centric,” said Townsend. “In East Africa, we work alongside Kenyan forces to fight al-Shabaab, maintain awareness in the western Indian Ocean and assure regional security. We are grateful for our relationship with Kenya, which will only continue to grow as we move forward together.”

Cutlass Express 2021 is a US Africa Command exercise led by US Naval Forces Europe-Africa, US Sixth Fleet. The exercise assesses and improves combined maritime law enforcement capacity, promotes national and regional security in East Africa, and increases interoperability between US, African and international partners, Africom said.

“Partnerships are the key to stability in Africa. Exercises like Cutlass Express bring like-minded partners together, spark discussion and collaboration and help generate African-led solutions,” said Townsend. “These partnerships allow us to better counter malign actors while improving security and prosperity on the continent.”

“The Western Indian Ocean has been rife with many maritime challenges for a prolonged period of time due to the porous vast sea area,” said Brigadier General Thomas N Nganga, commander, Kenya Naval Base Mtongwe. “Through cooperation, sharing of information and combined training among the local bilateral and multilateral cooperation, there has been tremendous improvement in maritime security.”

“India is a valued maritime security partner of the United States and the Indian Navy’s participation in Exercise Cutlass Express demonstrates our mutual commitment to ensuring a peaceful and stable Indian Ocean region,” said Townsend.

Following the visit to Kenya, Townsend and the US Africa Command delegation travelled to Dar es Salaam where they met with Tanzanian senior defence officials including General Venance Mabeyo, chief of defence forces. The two leaders supported the JCET opening ceremony between a US Special Forces Detachment and members of Tanzania’s Marine Special Forces.

“Joint Combined Exchange Training events improve the readiness of US forces, bolster relationships with our African partners and are key to our shared security objectives,” said Townsend. “US Africa Command appreciates the opportunity to grow our military relationship with Tanzania and explore areas of mutual concern and shared benefit. We look forward to continuing these discussions.”

The six-week exercise is the first between the US and Tanzania since 2017. The programme of instruction includes marksmanship, small unit tactics, medical, urban and rural movement techniques, mission planning, and maritime infiltration techniques. All US military training begins with the law of armed conflict and human rights instruction.

The trip concluded with stops in Mogadishu, Somalia, and Djibouti, Djibouti, to conduct security meeting with Department of State colleagues, and engagements with Combined Joint Task Force-Horn of Africa leaders and US service members in the region.

“This has been a productive trip, we’ve been able to connect with several of our essential East African partners who we work alongside to enhance security throughout the region,” said Thresher. “We also got to witness outstanding cooperative efforts between our US maritime and special operations forces and African and international partners in both Cutlass Express and the JCET.”