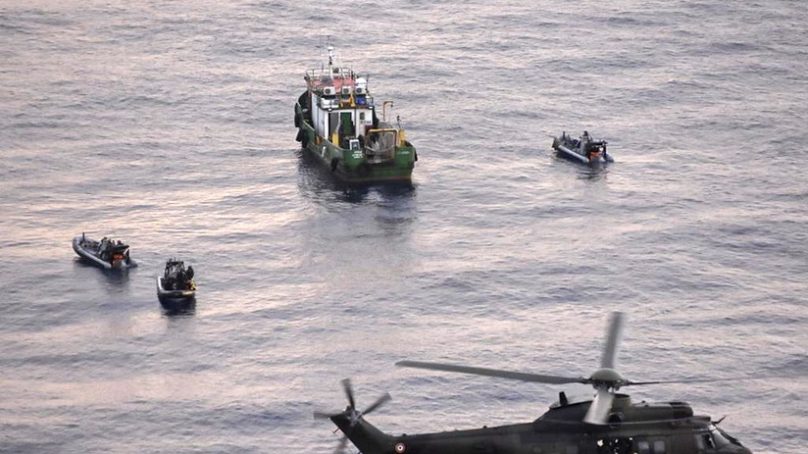 The French Navy has seized nearly five tonnes of cocaine from a Brazilian vessel in the Gulf of Guinea. The shipment was destined for Europe.

The French Navy’s landing helicopter dock Tonnerre, having just completed a visit to and joint exercise with Nigeria, intercepted the Brazilian tugboat after receiving intelligence from Europol, the European Union’s Maritime Analysis and Operations Centre (MAOC-N) and the authorities in Brazil, France, the United Kingdom and the United States.

Heading towards Europe, the 21 metre-long vessel was intercepted in international waters off the coast of Sierra Leone by the Tonnerre, supported by a Falcon 50M maritime surveillance aircraft, a naval Panther helicopter and an Army Aviation Cougar helicopter.

The vessel’s illegal shipment is believed to be worth in excess of $150 million, Europol reported. The drugs were destroyed and the crew released. An investigation is underway to identify the criminal groups involved on either side of the Atlantic Ocean.

West Africa is a common transit route for drugs from South America to Europe and large seizures have become relatively common. For example, in March 2021, the French Navy landing helicopter dock Dixmude seized six tonnes of cocaine in the Gulf of Guinea. It was being transported by a freighter (Najlan) that was under the St Kitts and Nevis flag.

So far this year, the MAOC-N partner countries have already seized over 15 tonnes of cocaine from operations coordinated through the centre, particularly in the area extending from Senegal/Cape Verde all the way to the Gulf of Guinea.