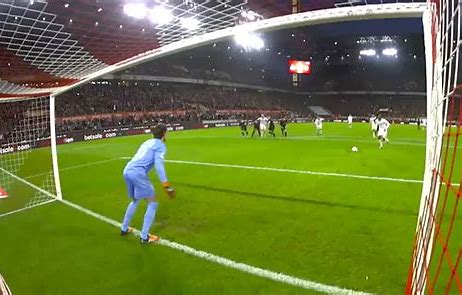 A relatively minor change, this, but a change nevertheless. In 2019, a rule change stipulated that goalkeepers must have at least one foot on the goal line when facing a penalty kick, but IFAB have now amended this rule to read that goalkeepers will now be allowed to have one foot behind the goal line at the point of contact of a penalty kick, meaning they can now start from a deeper position to build up momentum to help them make a save. Expect greater calf muscle training for goalkeepers across the Premier League.

The wording surrounding cautions and sendings off has also been amended slightly to broaden its net on what may be considered a sending-off offence. ‘Inappropriate behaviour’ will now be considered ‘offensive, insulting or abusive’ and will warrant a sending off, with ‘action(s)’ replacing ‘gesture(s)’ in the wording.

No further stoppages for medical emergencies in the crowd

Since the collapse of Christian Eriksen during a Euro 2020 match in Copenhagen, cardiac issues and the wellbeing of people inside football grounds has become an issue like never before. Over the last couple of years, it has become increasingly commonplace for play to stop due to medical emergencies in the crowd, particularly with players being notified of incidents and requesting that play be halted.

Obviously, this isn’t a blanket rule and there may be circumstances under which play would be stopped because of something going on in the crowd, but players have now been reminded that they should not halt a game, and that medical emergencies aren’t the responsibility of the team staff.

Premier League clubs have a doctor on call for all matches, and it has been reckoned that this sort of emergency can be dealt with (as, some might add, they were for many, many years) without the need to stop play altogether.

Changes to the refereeing panel

There were silent vigils the length and breadth of the nation at the end of last season, when it was confirmed that some of the Premier League’s most experienced referees were calling it a day. Mike Dean, Martin Atkinson, Jon Moss and Kevin Friend have all moved on to more administrative positions within PGMOL, with Dean going into the VAR arena, which definitely will not provoke any comment all season.

But there is one new referee coming into the Premier League this season: 32-year old Tom Bramall. And this is because four new referees were added at the start of last season.

Don’t panic. We’re not headed into Budweiser added-time multi-ball territory here. Not yet, anyway. But there will a change to how match balls are delivered to players this season to cut down on time-wasting and other unnecessary stoppages to play.

Ten balls will be dotted around the pitch during matches now: one ball in play, one with the fourth official, and eight placed at various points around the pitch on cones, two of which will be behind each goal, with two along each side of the pitch. This should ensure that play can continue more quickly if the ball is put into touch.

And while we’re on the subject of balls, as it’s the 30th anniversary of the formation of the Premier League this season, official suppliers Nike have gone back to the future with their design for this season’s official match ball, with a design that calls to mind the Mitre match balls used in the league during the 1990s.

It is worth remembering that although the Premier League had an official match ball from its inception, using it wasn’t made compulsory until 2000, when Mitre were replaced by Nike and the release of a new match ball became an annual cash grab event).

There’s a small change to the Premier League 2 this season, with the league changing from being for under-23s to under-21s. This change was introduced because the average age of player in this league is just 19 years old and, if anything, is something of a reversion to the Under-21 Premier League that was in place prior to 2016/17.

The rules on over-age players – each team can field a goalkeeper over the age limit and up to five over-age outfield players per match – will not be changing.

And finally, some good news for fans themselves. Fans were last allowed to stand at Premier League or Championship matches during the 1993-94 season, at the end of which the grace period allowed for clubs to upgrade their grounds to being all-seater expired.

The campaign for safe standing has been ongoing since then, but following a successful trial at five clubs – Cardiff City, Chelsea, Manchester City, Manchester United and Tottenham Hotspur – throughout the second half of last season, three further clubs – QPR, Brentford and Wolves – will be offering the same. More are expected to join soon.

Under licensed safe standing, fans are allowed to stand for matches in allocated spaces behind a barrier or a rail, in areas of persistent standing. Each supporter has to occupy the same area they would take if they were sitting, and with a traceable, numbered ticket. Seats cannot be locked in the up or down position, so fans can sit if they wish to, and the standing areas cannot affect the views of other fans.

Other parts of the grounds remain all-seated and fans are expected to sit in these areas.

The successful trial means that more clubs are expected to add safe standing areas throughout the current season, though space restrictions and current ground designs may limit the number of clubs who are able to offer them, and the number of tickets available will be very limited.

UEFA – whose ban on standing meant empty terraces behind the goal at the Manchester City Academy Stadium and Leigh Sports Village during Euro 22 – also recently announced a safe standing trial to be held throughout this season in England, Germany and France.