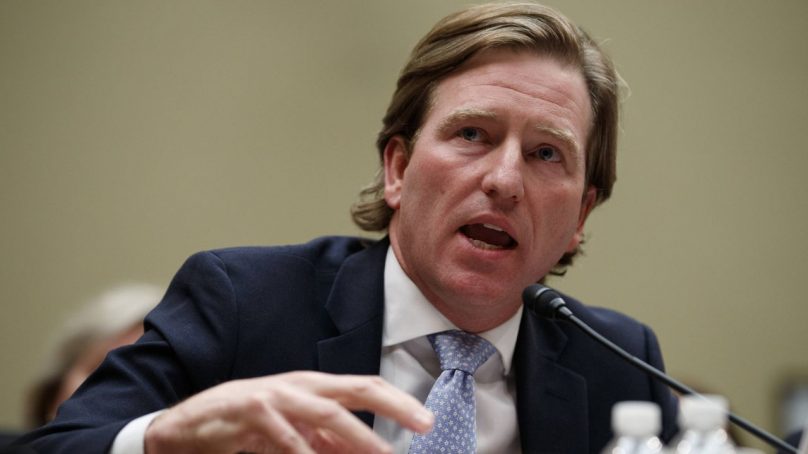 Within minutes of Donald Trump tweeting that he had fired Christopher Krebs as the director of the Department of Homeland Security’s cybersecurity agency on Tuesday night, Twitter slapped on a warning label that the accompanying claim about electoral fraud “is disputed.”

The disinformation warning was, in some ways, a fitting denouement to a two-week-long battle between Krebs, the head of the Cybersecurity and Infrastructure Security Agency, and Trump.

Trump has since spread disinformation wildly and has prevented the government bureaucracy from beginning a normal, peaceful transition. His increasingly quixotic legal battle has seen over a dozen courtroom losses across multiple states.

Krebs did nothing more than tell the truths that Trump is trying to ignore; he was fired for almost literally pointing out that the emperor has no clothes.

In the eyes of all but one person, the Department of Homeland Security’s “Rumor Control” website has been a runaway success.

Created in the run-up to this month’s election by CISA, which oversees the Department of Homeland Security’s election-focused work, the website has been rapidly fact-checking and debunking all manner of conspiracies, misunderstandings, and outright disinformation circulating online.

The Rumor Control exercise proved an integral part of one of the most surprising aspects of this year’s presidential election. After Russia’s multifront attack in 2016 sparked four years of scrambling to protect and defend the 2020 campaigns, the US government and the nation’s secretaries of state managed to successfully navigate a fraught and complex election mid-pandemic without major foreign interference and without any serious allegation of fraud or hacking.

And yet, in the two weeks since the election, CISA’s Rumor Control efforts have increasingly had to fight an unexpected adversary: Donald Trump. The president’s Twitter feed continues to spew and amplify nonsensical counting and ballot conspiracies, often all in caps.

Krebs might just be the lone figure to emerge from the administration with a better reputation than when he entered it.

CISA director Krebs didn’t back down from the unprecedented challenge. His own tweets and the Rumor Control site took on the president’s disinformation at first obliquely and then increasingly directly – even specifically referencing lies spread from the Oval Office.

By last Thursday afternoon, as the Trump administration’s petty – and largely performative – purge of officials seen as insufficiently loyal spread across the government, Reuters reported that Krebs expected to be fired imminently.

And yet CISA pushed forward. Thursday night, the agency released a strong and remarkable statement signed by nearly every major player in the US election, including the US Election Assistance Commission chair, the presidents of the National Association of Secretaries of State and the National Association of State Election Directors, as well as other security leaders.

“The November 3 election was the most secure in American history,” they said together. In bold text, the statement continued: “There is no evidence that any voting system deleted or lost votes, changed votes, or was in any way compromised.”

A flurry of further articles on Friday last week and over the weekend documented the collision path between Krebs and the president. After a quiet Monday when it appeared that perhaps CISA and the White House had reached a stalemate, the president announced on Twitter shortly after Tuesday evening, two weeks to the hour after polls began closing on Election Day, that Krebs was terminated immediately.

“The recent statement by Chris Krebs on the security of the 2020 Election was highly inaccurate, in that there were massive improprieties and fraud—including dead people voting, Poll Watchers not allowed into polling locations, ‘glitches’ in the voting machines which changed … votes from Trump to Biden, late voting, and many more,” Trump wrote.

“Therefore, effective immediately, Chris Krebs has been terminated as Director of the Cybersecurity and Infrastructure Security Agency.” Twitter quickly slapped its weak-willed warning labels on both tweets, since none of the president’s allegations have been borne out despite extensive monitoring, recounts, and court battles.

Trump’s inability to even posit a plausible cover story for firing Krebs sent a chilling message about just how far the losing candidate intends to fight the election results. However, anticipated, the move amplifies a rolling national security crisis that has played out across the government in the days since the election.

For many Americans, the firing might have been the first time they even heard of either CISA or Krebs. And yet the agency founded in 2018 might just be the biggest government success story to emerge from the Trump administration. And Krebs – smart, driven and universally respected – might just be the lone figure to emerge from the administration with a better reputation than when he entered it.

The DHS, outgunned in legal authorities by the FBI and talent-wise by the NSA, had struggled for nearly 15 years to find its footing in the government’s cybersecurity work. Events from WannaCry to NotPetya to the 2016 Russia election attack had underscored the importance of a more coherent and coordinated government response.

Krebs started in 2017 as an adviser to the DHS secretary before being appointed as assistant secretary for infrastructure protection, part of what was then known by the DHS bureaucratic mouthful as the National Protection and Programs Directorate.

However, since the NPPD had no Senate-confirmed leader, Krebs effectively oversaw the directorate’s cyber mission and was eventually nominated to be the permanent under-secretary. In an era where even routine positions can face opposition, the Senate confirmed him with just a voice vote. He then helped shepherd through the congressional legislation that reorganized and rebranded the division into CISA. Krebs became CISA’s first – and until now only – director.

Overall, DHS has seen five leaders in Trump’s single term and has been most recently led by an acting secretary for more than 570 days. It has been the centre of many of the Trump administration’s most contentious fights, from the Muslim travel ban to the border wall to the child separation policy, which left at least 545 children permanently orphaned.

Beyond the bipartisan respect he earned, part of what made Krebs such a unicorn in the Trump administration was his longevity. He was one of the only remaining Senate-confirmed leaders in all of DHS. Even before the Trump White House began forcing out DHS leaders this week, the department has been hollowed out and mismanaged throughout the Trump administration, with multiple top roles either vacant or not confirmed by the Senate.

The DHS overall is in such dire straits that just hours before Krebs’ firing, the department attempted to dodge questions about the legality of Chad Wolf’s appointment as acting secretary by briefly installing FEMA director Peter Gaynor in the role, then immediately replacing him with Wolf. In other words, the department temporarily installed a sixth acting secretary in order to retroactively approve and ratify the selection of the fifth secretary.

Rather than engage with the department’s bumbling or its most controversial policies, Krebs kept his head down at CISA and until the election steered clear of controversy, building the agency into a rare area of bipartisan pride and comity.

Krebs, who before the administration headed US cybersecurity policy at Microsoft, has built his and CISA’s reputations by showing up nearly everywhere. he’s a regular on the conference circuit – he even launched CISA’s own annual security conference – and participates heavily in industry events and public-private convenings, including at the Aspen Cyber Group.

Though underfunded and undermanned, CISA has raced to work with state, local and tribal partners to secure the 2020 presidential election, with its top election security advisor, Matt Masterson, also winning plaudits and respect from across the spectrum. Against long odds the election did unfold smoothly, in part because of quick offensive actions and official condemnations against both Russia and Iran when they showed signs of attempting to interfere.

The tweets and consistent pushback against the president’s misinformation in recent weeks from CISA generally and Krebs specifically had attracted a wide spectrum of fans, as well as wonder that any Trump appointee would so directly take on the president.

Until last week, Krebs had been expected to stay on through the end of the administration and had been hard at work for the agency’s first-ever transition to a new president.

Names for a CISA successor circulating in DC circles include Caitlin Durkovich, an infrastructure security consultant who worked at its NPPD predecessor as an assistant secretary during the Obama administration and Rob Silvers, a cybersecurity lawyer at Paul Hastings who similarly served at DHS under Obama. Both Silvers and Durkovich are now serving on the Biden transition’s “agency review teams” for DHS, team assignments that often can yield future government appointments.

One intriguing name floating around the CISA conversations in Washington is former Facebook chief security officer Alex Stamos, an outspoken hacker whose work at the platform uncovering Russia’s social media efforts amid the 2016 election helped federal prosecutors build their case against the Internet Research Agency and Russian military intelligence hackers. Stamos more recently founded the Stanford Internet Observatory and has dedicated himself to combating disinformation online and pushing the industry and government to take cybersecurity more seriously.