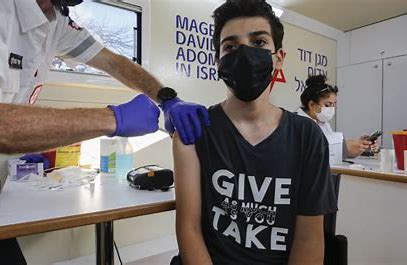 On 21 June, Israel’s Ministry of Health recommended that all individuals aged 12-15 be vaccinated against Covid-19 – making the nation one of the few that have so far approved vaccinations for younger adolescents. The decision came in response to a trend that many countries with high rates of vaccination are experiencing: an ever-increasing proportion of new infections are in younger age groups.

Israel’s swift vaccination campaign, which has now reached more than 85 per cent of the adult population, saw case numbers drop to around a dozen a day in early June. But later that month, cases began to rise to more than 100 a day, many of in people under 16, leading the government to open up vaccinations to all teenagers.

The younger profile of cases is not surprising, says Ran Balicer, an epidemiologist at Israel’s largest health-care provider, Clalit Health Services, in Tel Aviv. But it highlights the possibility that subsequent waves of community spread could be driven by younger age groups, especially in the presence of new, more transmissible variants.

It’s a trend that’s not restricted to Israel. In the United States and the United Kingdom, Covid-19 has “become a disease of the unvaccinated, who are predominantly young”, says Joshua Goldstein, a demographer at the University of California, Berkeley.

This shift is occurring in many countries that vaccinated older people first, and are now reaching high levels of vaccination in the adult population. It follows an earlier drop in age resulting from public-health measures to prevent the spread of Covid-19 among older people who are most at risk of severe disease, such as those in nursing homes, say researchers.

And the shift has brought fresh impetus to studies of transmission and disease in younger age groups. To make better policy decisions, “it’s becoming more and more important to understand the burden of disease among children and adolescents”, says Karin Magnusson, an epidemiologist at the Norwegian Institute of Public Health in Oslo.

Magnusson has looked at the impact of Covid-19 in children on Norway’s health-care system. In a June 5preprint, she reported that although they didn’t need specialist care, children often needed to see their doctor repeatedly for up to six months after contracting the virus.

Balicer is studying viral spread in multigenerational households in Israel. Beyond decisions about vaccinating children, the changing patterns of COVID-19 infection have also fuelled discussions about extending health measures such as mask wearing to adolescents and kids in Israel, he says.

“As the burden of cases shifts towards younger people, arguments for vaccinating adolescents will become slightly more compelling,” agrees Nick Bundle, an epidemiologist at the European Centre for Disease Prevention and Control in Stockholm.

However, the overall risk of severe disease in children remains low, and in many countries that have observed the proportion of cases rising in younger age groups, the total number of cases has fallen, he points out.

And countries also need to consider the global context, say researchers. “Are we really better off giving the vaccine to kids in rich countries than to older people [in less wealthy countries] where it might have a much bigger impact on people’s lives?” says Jennie Lavine, who studies infectious-disease dynamics at Emory University in Atlanta, Georgia. “It seems hard for me to imagine a really good argument for that.”

Although the downward shift in the average age of infections in countries with high COVID-19 vaccination rates is an interesting phenomenon, it might be short-lived, say some researchers. A few scenarios could shift the balance back, says Henrik Salje, an infectious-disease epidemiologist at the University of Cambridge, UK.

Many countries could start to vaccinate younger people,  as Israel and the United States are already doing, or new variants and waning immunity among older age groups could make them freshly susceptible, he says.

COVID-19 could still become a disease of the young, says Bundle. “But how big a problem that is, is not a simple thing to respond to.”