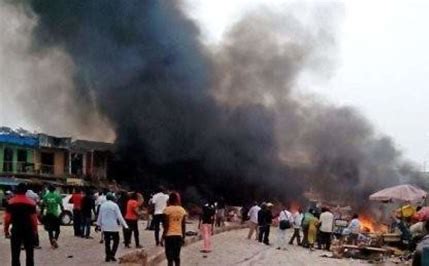 A series of explosions hit Burundi’s commercial capital, killing at least three people and injuring dozens on Monday evening, police and media reports said, the latest in a string of attacks.

The blasts in Bujumbura followed a deadly grenade explosion in a bar in the capital Gitega on Sunday and a series of mortars launched on Burundi’s international airport Saturday night. At least two grenades exploded in a bus parking lot in Bujumbura’s city centre on Monday at around 7pm, a police source and eyewitnesses said.

“One of the victims was killed and 29 others injured, some seriously,” the police official said on condition of anonymity, giving a provisional toll.  The blasts triggered panic among bus drivers, passengers and pedestrians, who frantically tried to escape the carnage.

The third blast targeted a market, killing at least two people and injuring several others, the Iwacu newspaper reported. Burundian officials could not immediately be reached and there were no claims of responsibility for Monday’s blasts or Sunday’s grenade explosion, which killed at least two people in a bar in Gitega.

“A grenade was thrown last night in a bar run by a police officer where many officials and members of the ruling party were gathered,” a security source said on condition of anonymity on Monday.

A police officer said the blast killed two people on the spot, while eight others were being treated at medical facilities in Gitega. It followed an attack on the airport in Bujumbura a day before President Evariste Ndayishimiye was due to fly out for the UN General Assembly in New York.

No one was injured in the assault which saw a series of mortar shells fired at the airport. The RED-Tabara rebel group –accused of being behind many deadly attacks or ambushes across the country since 2015 — claimed responsibility for Saturday’s attack in a statement on Twitter.

“These are coordinated attacks launched by enemies of peace who have wanted to show for three days that there is no peace in Burundi when President Ndayishimiye is at the UN General Assembly”, a senior Burundian official said on condition of anonymity.

“But they are mistaken, the situation is under control despite their little outbursts,” he added.

RED-Tabara, which has a rear base in South Kivu in the neighbouring Democratic Republic of Congo, emerged 10 years ago and is now the most active of Burundi’s rebel groups.

In 2020, it claimed responsibility for a series of attacks in which it killed more than 40 people among security forces and the youth league of the ruling CNDD-FDD party.

The Burundian government and many diplomats believed at the time that the rebel group, of 500-800 men, was led by one of the fiercest opponents of the state, Alexis Sinduhije, who has always denied it.