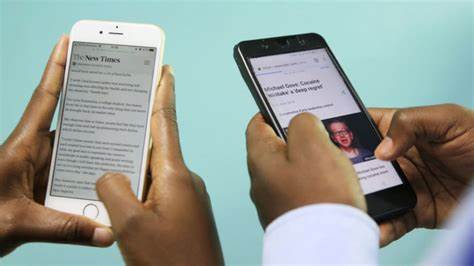 The rise in disinformation in Africa poses a threat to security, public health and democracy, fact-checkers warn. The African Centre for Security and Strategic Studies (ACSSS) says combatting misinformation requires building the capacity of Africa’s fact-checking community and improving media literacy. The process, they say, is painstakingly slow and risky for the political, social and economic stability of the continent.

The survey of over 27,000 respondents in 18 countries under the banner Afrobarometer found that overwhelming numbers believe that 88 per cent social media inform consumers about politics, which helped 73 per cent them have political standpoint. However, a majority said social media also makes 64 per cent of the people less tolerant and 77 per cent more were likely to believe fake news.

With all this disinformation, comes an urgent need for fact-checkers. Established in 2012, Africa Check, the continent’s oldest fact-checking organisation, was created to promote accuracy in public debates and the media.

With a staff of 57 operating out of regional offices in Kenya, Nigeria, Senegal, South Africa and the United Kingdom, Africa Check fact checks nearly 100,000 inquiries from media consumers every year, producing factsheets in English and French testing claims by public figures, institutions and traditional and social media against the best available evidence.

For perspectives on what African fact-checkers are doing to come to grips with the growing problem of disinformation, the Africa Centre for Security and Strategic Studies spoke to Lee Mwiti, the editor-in-chief of Africa Check, who confirmed that disinformation is not a new phenomenon.

Mwiti is quoted by ACSSS as saying, “While disinformation is not new, the diversification of media platforms and the speed with which information travels nowadays has made it much more prevalent. Information is now exchanged in real time through newer, broader and more sophisticated, yet affordable, mediums. All you need is a smartphone and internet connection to circulate manufactured stories.”

According to the survey, 67 per cent of the youth expressed concern that fake news circulating through social media hampers their ability to stay informed.

This is borne out by empirical data. The African Youth Survey, conducted in 14 countries by the South Africa-based Ichikowitz Family Foundation found that the least trusted sources of news among Africa’s youth are Facebook, which accounts for 53 per cent and WhatsApp 50 per cent.  The perception is informed by the sheer number of false stories found on their platforms daily.

“Sixty-seven percent of youth say that fake news circulating through social media hampers their ability to stay informed. At the same time, social media is a major source of news for 54 per cent of the youth, suggesting that young people in Africa rely on social media for their information – even though they distrust it as a source,” according to the survey.

An example of how disinformation can spread on social media is a rumour that 50 African children were paralysed after receiving the meningitis vaccine.

“The story was started by an anti-vaccine network. Although it was first published in 2013, it began circulating again in 2020 amid a spike in conspiracy theories about the Covid-19 vaccine. Our investigations found this story to be totally false. However, it had already been viewed over one million times,” the report says.

Another example involved a crime syndicate specialising in identity theft, which was behind a case ACSSS says it investigated in September 2020 after a request from the South African supermarket chain, Boxer.

The investigation found that the group in question set up a fake Facebook page – Boxer Hiring – that claimed that the supermarket was looking for 3,600 general workers to be paid between 4,800 to 6,000 South African rand ($325-400) per month, as a means to gain access to applicants’ identity details. The page was pulled down after investigations revealed that it was fake.

In addition, the survey found, that not all disinformation occurs on the internet or on social media. Fake news is also, at times, created and circulated by the traditional media – both state-owned and private – before doing the rounds on social media and other online mediums.

Thus, traditional and social media are part of the same conveyor belt of news and information, both bad and good.

“Many of the really pernicious stories we deal with are in the areas of health and politics. In Nigeria, for instance, we’ve investigated numerous cases of fake medicinal cures by pseudo-scientists capitalising on the public’s limited knowledge of medical science. In East Africa, we’ve debunked hundreds of claims that a special tonic consisting of herbal concoctions, typically involving a mix of honey, ginger, hot peppers, garlic and herbal teas and popularly called dawa (medicine), can ‘burn’ the Covid-19 virus in the body,” ACSSS reports.

The potency of the herbal cure for Covid-19 rumour, it adds, is such that many dining establishments serve dawa on their menu thanks to its heavy promotion on social and traditional media and popular gossip.

One how-to video teaching people how to make the tonic at home was shared over 4,200 times on Facebook in January 2021 at the start of the second wave of the pandemic in East Africa.

In South Africa, the claim that 70 per cent of the informal economy was controlled by foreigners – derisively called amakwerekwere or “those who speak a language we don’t understand – was spread by a Member of Parliament to incite xenophobic attitudes against mainly African immigrants.

ACSSS investigated this claim in March 2020, a few days after it was made. What we found was that, in fact, only 20 per cent of informal businesses were owned by non-South Africans.

In another case in South Africa, ACSS says it alerted the public to hate-inciting videos during a bout of xenophobic violence. One video on Twitter with 189,000 views purportedly showed a burning building in Johannesburg with foreigners jumping through windows to escape.

A large menacing crowd was waiting below, ostensibly to kill them. On closer inspection, the signage on the building was not written in any of South Africa’s 11 official languages and members of the public below were mostly Asian.

It turns out that the video was in fact taken in Gujarat, India, after a fire broke out in an educational centre. The crowds below were trying to help the victims.

The problem that fact-checkers face is that so much damage has been done by the time they are able to establish and disseminate the facts.

The least trusted sources of news among Africa’s youth are Facebook and WhatsApp due to the sheer number of false stories found on their platforms daily.

One particularly tragic story that comes to mind has to do with pro-Biafra sympathisers in Nigeria. While the secessionist Biafra civil war ended more than 50 years ago, some activists and politicians have engaged in a relentless disinformation campaign on social media to create the impression that hostilities have resumed and the formation of an independent state is imminent.

This has revived ethnic passions among Biafrans, as it did in the late 1960s. Africa Check investigated this and found that while the social and political tensions underlying Biafran separatist sentiments continue to simmer, a crisis on the scale of the 1960s is in fact not imminent.

How did we dispel this rumour? First, ACSSS fact-checkers tracked down and contacted the people making the claims to ask them about their sources and proof. We then turned to experts in the field to add nuance and context in disproving each claim.

The sources of unrest in Nigeria’s South East region (the heart of Biafran agitation) were properly mapped and explained. Afterward, the researchers wrote briefs setting out this evidence step by step. These were then disseminated widely to media organisations, civil society, parliamentarians, politicians, diplomats, and other interest groups.

This entire process takes a few days to a week at the most. Our fact-checkers and writers maintain currency on a wide range of issues and the sources we use for verification are always on standby so we can move quickly through these steps.

Storm before a lull: African economies to bounce back after coronavirus chaos