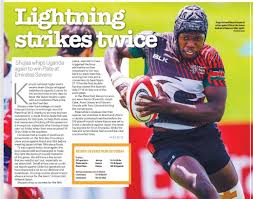 Kenya Rugby Union wants the sports in general and rugby in particular spared stiff lockdown and curfew regulations to enable national teams, clubs and players to prepare for local and international assignments.

The appeal to President Uhuru Kenyatta is informed by fears that the country, which is preparing for Tokyo Olympic Games in Japan may not live up to its billing as ta op athletics, rugby and volleyball nation because sports has been in the doldrums for more than a year.

In a statement, the Kenya Rugby Union says, unlike religious and political organisations that attract big crowds and social gatherings like weddings and traditional ceremonies, the sports fraternity has adhered strictly to the Ministry of Health Covid-19 protocols during competitions and training to warrant being lumped together with care-free groups.

Political, religious and cultural activities have been singled out for persistently flouting World Health Organisation and Ministry of Health protocols that are being observed throughout the world.

“The presidential announcement of March 25 that suspended sporting activities in the country has dealt a blow to rugby and by extension the greater sports fraternity. While this directive was part of a raft of measures to curb the spread of Covid-19, which continues to cause havoc locally and internationally, it has left us in an awkward situation,” KRU says in a statement distributed by APO public relations agency.

The “awkward situation” refers to payer welfare and the national duties ahead. Most of the players earn a living from rugby and since the suspension of the leagues, the players have to depend on well-wishers to make ends meet.

The Kenya Sevens rugby men’s and women’s teams will represent Africa in the Tokyo Olympics in August. The teams were also beginning to shape up for the International Rugby Board circuit, where Kenya is the among the only African nations – the other being South Africa – that takes part.

The March 25 suspension sporting activities came at a time when Kenyan rugby was picking up after a year of inactivity occasioned by the initial lockdown and ensuing factors critical to getting the government greenlight to return to play.

KRU says, “This period of inactivity came at a cost. We lost revenue due to event cancellations, most notably the Rugby Africa Barthes U-20 Trophy, the National Sevens Circuit and the Safari Sevens.”

While the government was generous when it offered national team players stipend during the time were inactive, players outside the national team’s realm were disenfranchised by the disruption of sporting activities countrywide.

“Think about those men and women who contributed to the game as match officials, medics, service providers, vendors, journalists, photographers and broadcasters – their livelihoods took a hit and they, alongside their dependents have borne the brunt of the disruption. We also subjected our employees to pay-cuts as part of the mitigation factors brought about by this unique situation,” KRU explains.

The Kenya Rugby Union took the measures at a time when our national men’s and women squads were preparing to fly the Kenyan flag high in sevens rugby at the Olympic Games.

“We received a reprieve when the government allowed our national teams to resume training under a series of guidelines that we religiously adhered to. We would a few months later, receive the greenlight to resume local top tier competition behind closed doors and under more guidelines from the authorities. The Kenya Rugby Union has again diligently adhered to these guidelines as well as those issued by the game’s global governing body, World Rugby,” says KRU.

The union says it regularly subjects players and match officials in the Kenya Cup league to testing and had taken the necessary steps that include contact tracing and re-testing in cases where players are Covid-19 positive.

It says it has been forced to postpone fixtures in instances where it was felt the matches posed a greater health and safety risk.

“We have been prepared, and remain prepared to run the game during this trying time,” according to the union.

It adds, “Going beyond the league, the opportunity to effectively prepare our national teams for a series of international competitions, most notably the Tokyo Olympic Games, as well as the men’s and women’s Rugby World Cup is seriously comprised with each passing day.”

Kenya is also set to host the 2021 Rugby Africa U20 Barthes Trophy and preparations had indeed moved a notch higher with the formation of the government-backed Local Organising Committee (LOC).

Rugby is a contact sport and the levels of strength and conditioning take time to attain. After the long break, players had just started getting into shape. With another possibly prolonged break, the rugby body says the players will lose all the gains and ultimately be uncompetitive in the upcoming international assignments.

Sports federations have worked tirelessly to resume activity under the laid down guidelines. Most of the players earn a living off sport and have been denied opportunities to engage in meaningful income generating activities.