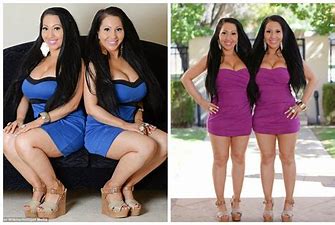 Extreme sisters: World’s ‘most identical twins’ want to get pregnant at same time with shared fiancé

Identical twins tend to do a lot of things together. But one pair of similar siblings have taken that philosophy to a whole new level. Anna and Lucy DeCinque, 35, say they are the world’s “most identical twins”, and have made a name for themselves by living eerily similar lives – even down to sharing one fiancé.

Now, the sisters from Perth, Australia, are planning to get pregnant at the same time, with their partner of nine years, Ben Byrne.  The move isn’t a huge surprise for the twins, as they always go to incredibly extreme lengths to keep themselves perfectly identical.

Anna and Lucy follow identical diets and exercise routines, even measuring out their food to ensure they are eating exactly the same amounts. They have also spent nearly $250,000 on cosmetic treatment – including breast implants and their eyebrows – to look more alike.

The pair way out their food to make sure they are eating exactly the same. The DeCinque twins share their interconnected lives in the American TLC network reality series, Extreme Sisters.

The programme, which documents the lives and relationships of the twins and four other sets of siblings, launched in the US earlier this week, and shows the twins quest to get pregnant at the same time. The sisters take their temperatures at the same time each morning to find out if they are ovulating, and recently discovered that they were most fertile at the same time of the month.

“We learnt from the internet that when your temperature goes up your ovulating,” Lucy said in a recent YouTube clip.

“We’re the three degrees up,” they explained after reading their thermometers. “We are ovulating, we are exactly the same.”

Then they called for their partner Ben. The next clip shows the sisters with their legs up against the wall to try to help them successfully conceive. Falling pregnant at the same time is particularly important to the sisters, because they like to do everything together.

“When she goes to the toilet, I come with her; when she has a shower, I come with her,” Anna told the New York Post. You name it and we do it. We’re never apart. I don’t think we’d function without each other. We have separation anxiety. We’re bound to each other.”

Afropessimism: You sure don’t catch hell because you’re an American; if you was an American, you wouldn’t catch no hell